Egyptian archaeologists rely on technology to preserve past 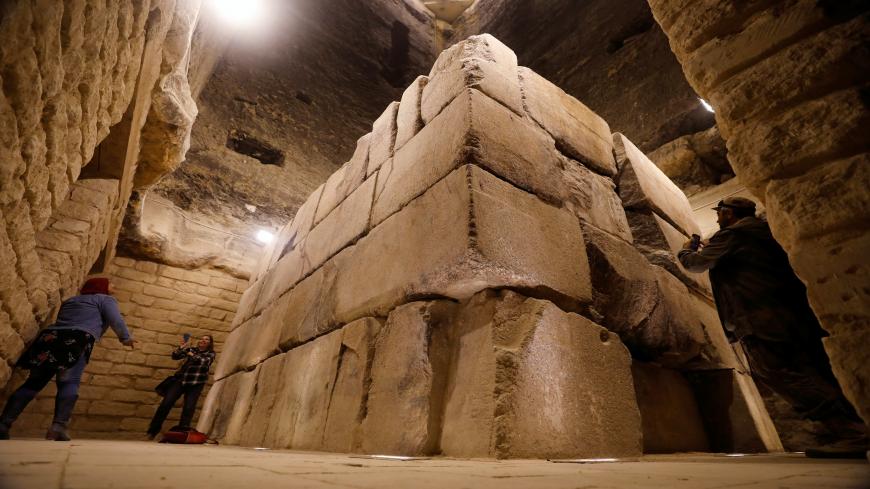 “When I first embarked on my career in documenting Egyptian antiquities to preserve them and allow their study throughout the ages, this was not easy,” said Monica Hanna, an Egyptian archaeologist and founding dean of the College of Archaeology of Cultural Heritage at the Arab Academy for Science, Technology, and Maritime Transport.

Hanna was able to use modern technology to help her perform her duties to preserve and document Egyptian heritage. She now resorts to various Google tools and uses them in her work as an Egyptian archaeologist. Internet company Google was inspired by Hanna and asked her to share her experience in video footage that would promote Egyptian heritage, attract visitors from all over the world and bridge the gap between the new generation and the country’s cultural history.

Hanna registered the Egyptian heritage through the Google Scholar platform, which is one of the most important engines of academic scientific research, as it specializes in scientific and academic literature needed by researchers, including professors, teachers and students. The tool also provides abundant material from research and approved scientific messages, scientific journals, books, summaries and articles issued by academic publishers, international universities, specialized organizations and other scientific research institutions.

On the debut of her career, Hanna told Al-Monitor, “I found it difficult to obtain some academic information or even share it, not to mention the difficulty of finding archaeological sites with traditional paper maps. I had to reach archaeological excavation sites in the middle of the desert relying on a paper map that I specifically acquired from the [General] Survey Authority, and without the help of satellite images. Sometimes I had no evidence to prove the existence of the site I was searching for.”

She noted that Google tools have become essential in her work and she even relies on them in her research and curricula that she teaches. “Archaeologists need technology to work better. Nowadays archaeology cannot be excluded from technological development, especially at the academic level. We teach students how to use and employ modern technological tools so that they can graduate having acquired skills both in modern technologies and archaeology and can face the challenges of the 21st century.”

Hanna has been working since the January 25 Revolution in 2011 to save Egypt’s monuments and antiquities from being lost, by registering and documenting them. Along with two of her friends — Sally Suleiman, a tourist guide, and Omnia Abdel-Barra, an architect — she formed a team to protect the Egyptian antiquities. The three women work together in search for stolen antiquities and explore the sites from where they were looted. The team travels to archaeological sites that were looted after the 2011 revolution and launches its own investigations. They photograph the damage and the archaeological remains, if any, and then determine the losses and compare the recent photos to the site's photos before the damage that are found on Google and taken by satellite.

Hanna obtained bachelor’s and master’s degrees in Egyptology and Archaeological Chemistry from the American University in Cairo. In 2010, she obtained a doctorate from the University of Pisa, Italy. She was nominated twice as minister of antiquities. She also won several awards in appreciation of her efforts to preserve and document Egyptian heritage. Hanna was named the “Monuments Woman” by UNESCO in recognition of her role in saving the monuments at Mallawi Museum in Minya governorate. She was awarded the “Saving Antiquities for Everyone” SAFE Beacon Award in the United States in 2014. In 2015, she received, twice, the Distinguished Alumni Award from the American University in Cairo and New York.

Hanna said, “The guards monitoring archaeological sites in Egypt always inform us of cases of theft and looting when they happen. Sometimes we hear about these cases from newspapers or various media. The worst cases of looting and theft occurred at the archaeological sites of Middle Egypt. These sites are visited by a small number of tourists at the present time, and [local] residents stole some antiquities.”

She added, “I think people are not really aware of how bad the situation of Egyptian monuments is. Our archaeological treasures are running out, and the negative impact will be significant in the long run.”

Hanna stressed the need to spread archaeological awareness among citizens by launching frequent media and advertising campaigns and by allocating TV programs to this subject, most notably on popular satellite channels with a large audience.

Meanwhile, the National Center for Documentation of Cultural and Natural Heritage, affiliated with Bibliotheca Alexandrina and supported by the Ministry of Communications and Information Technology, is one of the most important centers for accurate and purposeful documentation of Egypt's heritage.

The center has a special global appeal as it highlights various aspects of human civilizations and monitors their development. It is part of the national plan adopted by the Ministry of Communications and Information Technology for developing the infrastructure of information technology in Egypt, with the aim of documenting, protecting and rehabilitating archaeological sites, in light of the presence of a huge number of sites, monuments and artifacts scattered all over Egypt amid an expanding urban sprawl around them.