Syria’s archaeological sites have suffered great damage, but many organizations are striving to protect what remains, each in its own way. 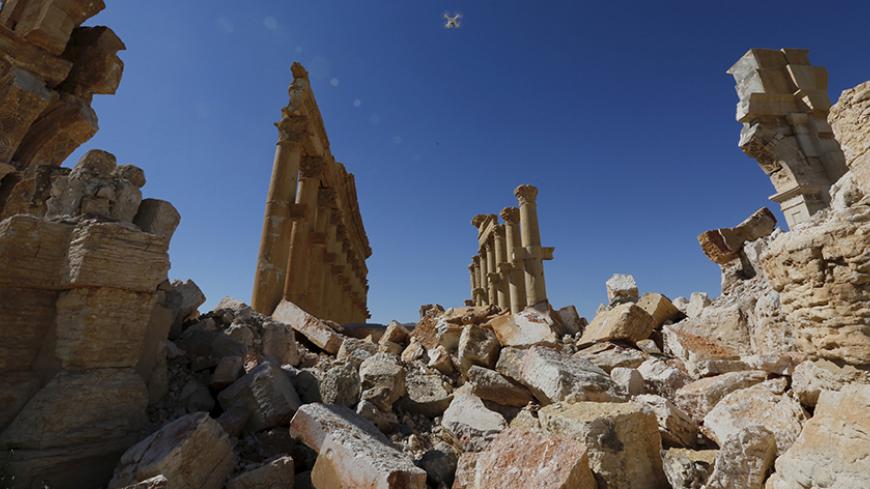 A view shows the damage at the Monumental Arch in the historic city of Palmyra, in Homs governorate, Syria, April 1, 2016. - REUTERS/Omar Sanadiki

BEIRUT — Some of Syria's endangered antiquities could find a safe haven in Europe. French President Francois Hollande announced Nov. 1 that the Louvre Museum in Paris will host heritage artifacts from Syria and Iraq by 2019. The preservation of Syrian heritage has been a priority for individuals and organizations from inside and outside Syria since the beginning of the country's civil war in 2011.

In 2009, Syrian tourism was a $6 billion industry, or 10% of gross domestic product, and the service industry accounted for 47%. With the war, these sectors have been decimated. For that reason, and more importantly to preserve Syrian heritage, foreign and Syrian archaeologists have drafted since 2011 an incomplete list of endangered sites and how they have been, and still are, threatened. The Association for the Protection of Syrian Archaeology (APSA) highlights the risks incurred by monuments during bombings, premeditated destruction, looting, vandalism and traffic — but also during maintenance work and restoration, or protection measures of the sites led by the Directorate-General of Antiquities and Museums (DGAM) in Syria with international archaeologists. The association provides daily updates for the public about historical sites affected via a YouTube channel.

On site, the information APSA gathers and processes is provided by “students in archaeology and architecture, but also civilians who alert and send information, sometimes risking their lives,” Martin Makinson, who is responsible for the organization's press relations, told Al-Monitor.

“This will serve, at the end of the conflict, to determine who did what and what is the extent of destruction, in an objective way. The destruction is not merely due to the Islamic State (IS) — the regime also caused it,” he said.

As with APSA, many international scientific initiatives have supported efforts to preserve artifacts in different ways since the Syrian conflict began. Shirin International, a nongovernmental organization composed of archaeologists and mission managers who worked on Syrian sites until 2011, focuses on three projects. One project conducts regular assessments of damage to sites and excavation houses. Another project is developing an information system capable of integrating all the archaeological data from recent surveys. The database eventually will help with drafting an inventory of museum objects as accurately as possible. The third endeavor involves recording the topography of sites, however small or isolated they might be.

“It is preventive archaeology,” Frank Braemer, Shirin president and research director at the French National Center for Scientific Research, told Al-Monitor. “As soon as the … work of clearing and cleaning sites begins, this will help prevent further destruction" by providing a clear idea of how the sites’ structures work and what causes damage to them.

His colleagues in the Shirin branch in Switzerland are invested in the fight against illegal trafficking of antiquities. Swiss legislation drafted in 2005 already provides a model law on the topic and Zurich museums offer to host objects from any country whose heritage is in danger.

Syrians with doctorates from the University of Geneva play a major role there, maintaining contact with the local population via social networks and raising awareness to prevent possible looting at already-damaged sites. Manar Kerdy is one of these volunteer researchers who keep in touch with their Syrian counterparts.

She told Al-Monitor, “I help because I am Syrian, and I want to protect my heritage. I communicate with local people because they live there [in Syria], they see what happens, and I see how we can help, how to involve them. Most often, they are students and civilians who worked in museums and excavation sites. Sometimes you have to send them money, or give them access to training. This is not easy as they face the worst, but we are listening to them, we are available.”

Other times, international aid is confined to data, as with the Syrian Heritage Archive Project of the German Archaeological Institute at the University of Cologne. With the coordination of DGAM, the project aims to develop a database capable of integrating all the information on ancient Syrian sites, including topography, the number of artifacts and details of the excavations through archives, photographs and reports.

That focus is shared by Iconem, a Paris-based company that provides technical support to Syrian archaeologists. The company documents sites by using drones and algorithms to make precise 3-D images, Yves Uberlmann, an architect and founder of Iconem, told Al-Monitor.

“We are not into restoration, but we provide reliable data to help experts make decisions, especially for our Syrian colleagues in DGAM,” he said.

DGAM Director Maamoun Abdulkarim told Al-Monitor, “Heritage is our identity, not politics. So we will continue to work because we risk losing a lot.”

With about 400 archaeologists and architects on-site, Abdulkarim is working on a field study in Palmyra, which was liberated from IS in March. The study is expected to last a year and will examine what reconstruction options are possible, while urgently restoring some items.

Mechtild Rossler, the director of UNESCO’s heritage division and the World Heritage Center, told Al-Monitor, “We [already] preserve [sites and artifacts in Syria]; in each case we consider our next steps. Sometimes also, we either leave the ruins or reconstruct small parts,” she said. “As for the city of Palmyra, we must take into account a reconstruction [process] on the basis of archaeological tourism, from which its 50,000 inhabitants benefited.”

UNESCO is already helping archaeologists and staff of Syrian museums through training seminars in Beirut, Amman and Damascus on emergency safeguarding, and is teaching customs' staff to detect antiques trafficked outside Syria.

However, UNESCO has been harshly criticized by archaeologists from around the world due to the statement of Director-General Bokova Irinia in March welcoming the liberation of Palmyra. On March 31, Syrian archaeologist Ali Othman signed a public letter questioning the organization's authority and calling for UNESCO to remain neutral regarding the conflict.

“There is no place here, in the current state of armed conflict, for a stand in favor of any of the parties involved directly in the Syrian tragedy,” he recently told Al-Monitor by email.

Rossler emphasized that UNESCO is “working on communication with the armed presence [referring to the Syrian rebels and regime, and their respective allies], especially to avoid strikes on sites. We remind the authorities of the need to protect heritage, but we cannot communicate directly with an army on a case of siege.”

A UNESCO conference on Syrian cultural heritage, held June 2-4 in Berlin, bypassed the controversy by focusing on assessments by 230 Syrian and international experts who called for cooperation between official, civil and scientific organizations to continue to preserve Syrian heritage and establish a post-conflict recovery plan.

All this marks a positive but still fragile will, when large parts of Syria's history, such as Aleppo's souks, have suffered and still suffer damage impossible to measure.