Can part of Palmyra's lost heritage be saved?

A number of different projects are underway to rectify the damage to Palmyra's heritage wrought by the Islamic State. 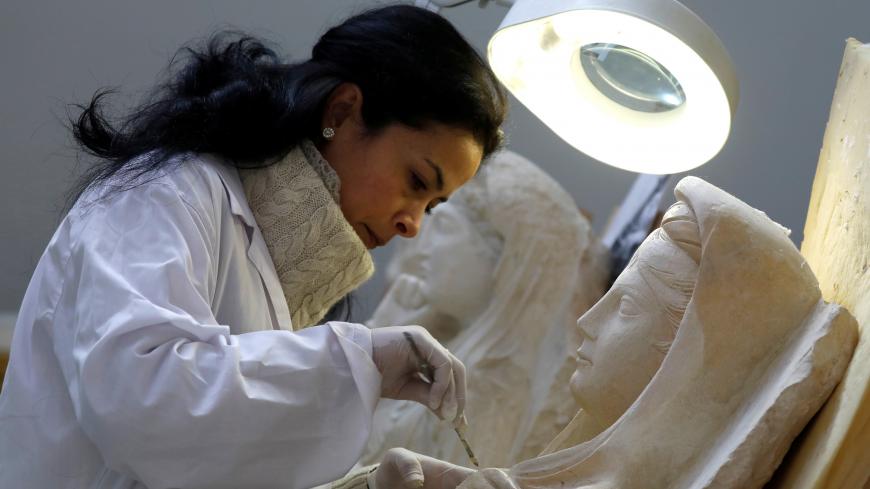 A specialist works on a damaged statue from Palmyra at the National Museum of Damascus, Syria, Jan. 9, 2019. - REUTERS/Omar Sanadiki

Parallel rows of marble columns rise across the Syrian desert, interspersed with temples and other impressive buildings. Palmyra was an oasis in the land between the Euphrates and the Mediterranean, inhabited even in prehistoric times. After the destruction of the city's ruins by Islamic State, modern technologies are being used to restore the ancient site and its treasures.

According to legend, King Solomon founded Palmyra on the spot. The city changed hands several times, seized by various Eastern and Western empires. The cultural blending in the city made it the true intersection of the Occident and Orient.

Under Roman domination during the first to the third century, Palmyra grew extremely wealthy as a caravan city along the Silk Road. Luxury items and spices from China, India, Persia and the Arabian Peninsula passed through it en route to Rome.

In 270 AD, Zenobia, the overly ambitious queen of Palmyra, seeking to become the empress of the entire East, inevitably clashed with Rome, which crushed her. Although Palmyra remained relatively prominent while a part of the Umayyad caliphate, seated in Damascus, the city's glory began to fade.

Called the “Bride of the Desert” by Syrians, Palmyra, probably so called because of the native palm trees there, was almost intact when a British-Italian expeditionary team came upon it in the 18th century while scouring the region. Sketches and engravings of its monuments and decorations would influence Western tastes, contributing to the popularity of neoclassical style.

Excavations of the site began during the French mandate, in the 1930s. Of note, the French archaeologist Henri Arnold Seyrig excavated the Bel temple, and the French architect Robert Amy also worked at the site.

In 1980, the United Nations Educational, Scientific and Cultural Organization added Palmyra to its World Heritage List as an early example of cultural fusion: “The art and architecture of Palmyra, standing at the crossroads of several civilizations, married Greco-Roman techniques with local traditions and Persian influences,” the organization's website states.

Professor Maria Teresa Grassi from the University of Milan led a joint Italian-Syrian archaeological expedition in Palmyra during 2007-10. “It is an exotic and magical place, but familiar to the Western eye,” she told Al-Monitor. At that point, it was one of the best-preserved and most-enthralling archaeological sites in the Mediterranean region. Trouble arrived later, when the Islamic State (IS) swept through the area, twice, between May 2015 and March 2017.

Members of the extremist group violated Palmyra, bombing and bulldozing some of its most beautiful shrines. At the local museum, they smashed statues found at the site. They even murdered Khaled al-As'ad, the general manager for antiquities and museums in Palmyra, for refusing to cooperate in revealing the location of certain items.

The extremists' ideology did not allow them to contemplate beauty. Rather it had to be disfigured and when possible destroyed. IS members filmed and distributed their acts of destruction, shocking and outraging the world. Some of the city's most symbolic wonders have been lost forever.

In rapid succession, IS destroyed the temple of Baal Shamin, the temple of Bel dedicated in 32 AD (and later turned into a church and then into a mosque), the Roman triumphal arch of Septimius Severus and magnificent tower-shaped tombs. The Great Colonnade, Palmyra's kilometer-long main axis, suffered damage along with the theater and the Tetrapylon.

Many of the artifacts from the local museum that survived were stolen and sold on the black market. Illegal excavations may have unearthed artistic treasures that will never be known.

The ancient city had been put on UNESCO's list of endangered sites in 2013, two years after the outbreak of the Syrian civil war. Emergency Safeguarding of the Syrian Cultural Heritage was launched the following year, with European Union funding. The project digitized inventories and archives and raised awareness about looting and trafficking. In 2016, after the first occupation of Palmyra by IS, UNESCO, European governments and cultural institutes worldwide initiated a campaign to restore its monuments.

Before being restituted to the National Museum of Damascus, they were displayed at the exhibition space at the Colosseum in Rome along with a reconstruction of the bas-relief from the Temple of Bel decorated with the Zodiac. IS dynamited the original. The Damascus museum joined in the collective effort, restoring the 15-ton iconic limestone lion that protected the entrance to the temple of Al-lat.

Regardless of the actual method, technology is, and will be, crucial to restoring Palmyra to life.

Correction: Jan. 22, 2019. An earlier version of this article mistakenly identified Robert Amy as a German archaeologist, rather he was French.