Russia is promoting its archaeological and historical restoration projects in Syria, as it tries to expand its influence in Syria by dominating the Syrian antiquities sector. 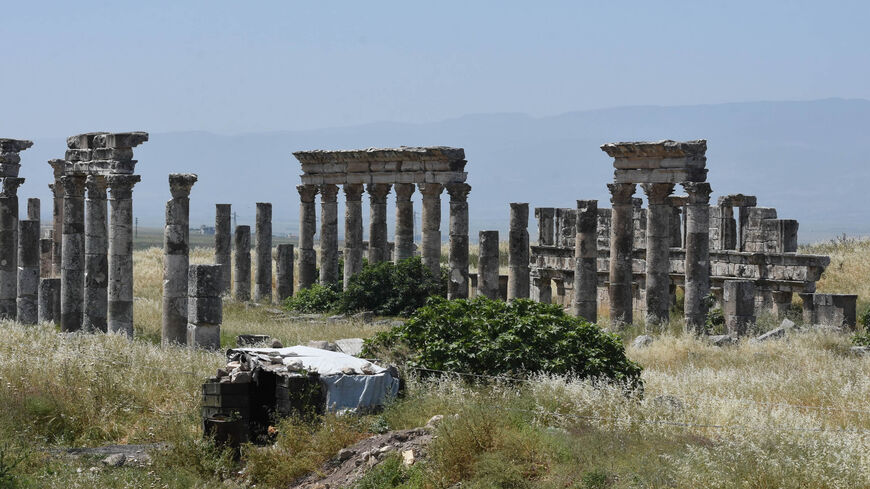 This picture shows a view of the Great Colonnade at the Greco-Roman ruins of the ancient city of Apamea, close to the town of Qalaat al-Madiq, after it was taken by government forces, Syria, May 17, 2019. - George Ourfalian/AFP via Getty Images

ALEPPO, Syria — A number of scientists and experts from Russia have created a digital model for the ancient city of Apamea and its churches in a move seemingly aimed at expanding and dominating the antiquities sector in Syria.

Apamea is located in the northwestern countryside of Hama province in central Syria.

On June 15, the Russian TV Zvezda channel published a video that showed how Russian scientists from the Institute for the History of Material Culture of the Russian Academy of Sciences prepared a digital model of the ancient city of Apamea and its churches. The report quoted Jegor Blochin, a researcher at the institute, as saying that the Russian scientists used remote sensing techniques inside the soil to create the city model.

Apamea was founded in 301 B.C., and was considered one of the most important cities in northern Syria during the Seleucid Empire, according to UNESCO.

During the Syrian opposition’s control of the ancient city, it was heavily damaged as a result of the Syrian government’s bombing and illegal excavations.

On May 9, 2019, the government forces regained control of Apamea and the nearby town of Qalaat al-Madiq in the countryside of Hama province. A few weeks later, the regime accused the opposition of destroying archaeological monuments in Apamea.

A former official in the government-affiliated Directorate-General for Antiquities and Museums told Al-Monitor on condition of anonymity, “It seems that the Russian interest in historical sites in Syria comes as part of its policies to expand influence in Syria, which also includes the political, economic and military sectors. The Russian interest in Syrian historical sites started in 2016, and ever since, reports about the Russian restoration of ancient cities have emerged.”

He said that a group of experts from the Russian Institute for the History of Material Culture are active in several Syrian provinces, as they work on studying temples, archaeological sites and ancient churches in Palmyra, Aleppo and Damascus, among other provinces.

“Historical sites are among the victims of the war in Syria, as several archaeological sites were damaged by the bombing of the Syrian regime forces and Russia or during the battles between the warring parties. Other antiquities were looted by the various parties, including the regime forces and allied militias, the Islamic State and the factions of the Free Syrian Army, as the antiquities trade flourished,” the official noted.

He added, "Russia is seeking to gain a foothold in post-war Syria through its interest in the antiquities sector. It is also working to mend ties with the West away from politics, since the archaeological sector is widely promoted and will be part of the reconstruction process in Syria. Huge funds must be pumped into Syria [for reconstruction], and it seems Russia wants to supervise the [archaeological] sector, along with other vital fields that have contributed to its growing influence in Syria in the past years.”

In December 2020, Russian Foreign Minister Sergey Lavrov said in an article he wrote on the occasion of the 75th anniversary of the founding of UNESCO that the time had come for the international community to take action to restore the world heritage sites in Syria, stressing that Russia wants to facilitate this process.

Meanwhile, Russian media have been increasingly focusing on archaeological sites in Syria in the past months, including ancient cities, museums or churches.

In February 2020, OZY media magazine published an article titled “Russia's Next Goal in Syria? Its Legacy,” in which it stated that Russia is finding in ancient cultural sites the latest way to gain influence in the Middle East.

On June 8, 2020, the Russian RT channel spoke about the restoration of a church in Aleppo. The channel quoted the deputy director of the Institute of History of Material Culture of the Russian Academy of Sciences, Natalia Solovyova, as saying, “We have a final result of our work, which is the creation of a 3D model, as a geographical information system and electronic archive.”

In February 2021, Russian experts completed a 3D model of the Citadel of Damascus and prepared models for Palmyra.

On March 26, the Russian TASS news agency spoke about a project aimed at having a Russian company prepare digital lists of historical sites in Syria. The agency quoted Oleg Gorbunov, head of the Department of Interaction with Educational Institutions of the Geoscan Group, as saying that the company intends to cooperate with archaeology institutes to digitize the heritage and historical sites in Syria, and work will begin during the current year if conditions permit.

According to Gorbunov, objects in the city of Palmyra have already been filmed as part of the project. Experts, meanwhile, expected other films to take place in other locations.

The Foundation for the Restoration of Palmyra announced in April that the restoration of the Arch of Triumph in the ancient city of Palmyra in Homs governorate will begin in 2022.

On May 2, Russia announced another project led by Russian archaeologists that includes assessing 10 churches in the city of Aleppo dating back to the early Middle Ages, taking pictures and videos of them, and preparing 3D models and calendar charts for the areas in which they are located.