Russia is restoring several archaeological sites in Syria, which many Syrians believe aims to polish the Russian presence in Syria and portray it as not a military or political presence but rather a humanitarian one. 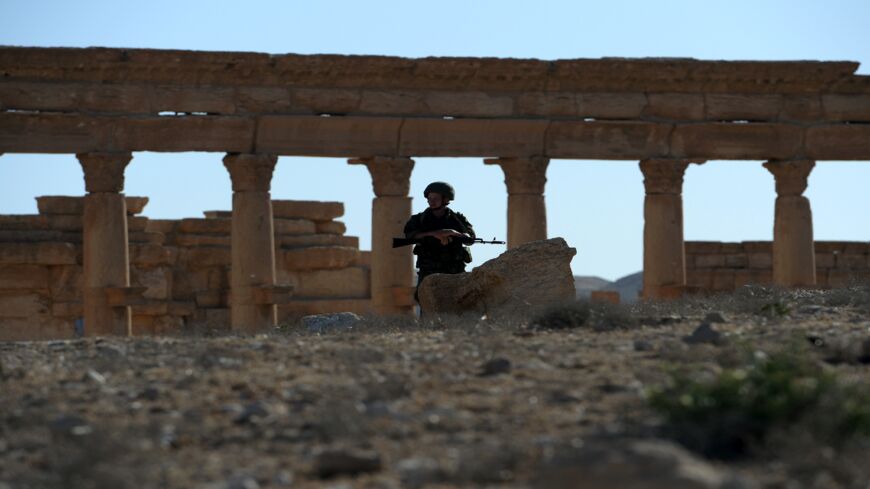 A Russian army soldier patrols the ancient Syrian city of Palmyra on May 5, 2016. - VASILY MAXIMOV/AFP via Getty Images

IDLIB, Syria — Russia is portraying itself as a protector of the human heritage in Syria by restoring archaeological sites across the war-torn country. On July 26, the head of the National Defense Management Center of the Russian Ministry of Defense, Mikhail Mizintsev, announced that the Institute for the History of Material Culture of the Russian Academy of Sciences and the Directorate-General of Antiquities and Museums in Syria began working to preserve cultural heritage sites in Syria.

Mizintsev's statement came on the sidelines of a meeting he chaired with Syrian government representatives at a conference on the return of Syrian refugees and displaced persons, held on July 26.

“Thanks to the efforts made by the Russian Academy of Sciences, the Institute for History of Material Culture, and representatives of the Directorate-General of Antiquities and Museums in Syria, decisive work began in studying and preserving Syrian cultural heritage sites and world heritage landmarks such as Palmyra,” Mizintsev added.

He pointed out that some other joint activities are being implemented in the field of humanitarian projects to support and develop talented children, and special programs are being organized in Russia for Syrian orphans in the fields of education, entertainment and health improvement.

Russian Foreign Minister Sergey Lavrov had called on the international community to take action to restore the world heritage sites in Syria.

In an article he wrote on the occasion of the 75th anniversary of the founding of UNESCO in November 2020, Lavrov said, “The time has come for the international community, led by UNESCO, to take effective measures to restore the world heritage sites in Syria that were destroyed at the hands of terrorists,” stressing Russia is “ready to contribute to this issue.”

He pointed out, “Member states have a common interest in reducing the degree of politicization, which restricts the effectiveness of UNESCO.” He further stressed the need to steer clear of “settling scores.”

In February 2020, the international magazine OZY published an article titled “Russia’s next target in Syria? It’s heritage,” in which it stated ancient history may be Russia’s latest route to gaining influence in the Middle East.

A Middle East Institute report from September 2020 titled “Who owns Syria's cultural heritage?” stated Syrian President Bashar al-Assad “understands very well that political manipulation of cultural heritage is a powerful tool in the armory of soft power” to embody himself as the only alternative to chaos.

The report said the “systematic destruction by [the Islamic State (IS)] of high-profile historic sites across Syria and Iraq, like Palmyra, served to make Assad’s narrative even more plausible — ‘It’s Assad or the extremists.’”

In this context, Saad Fansa, a US-based Syrian researcher in history and archaeology and founder of the Washington International Publishing House, told Al-Monitor, “Today, Russia has put its hand on Syria’s capabilities with a definitive sale deed signed by Assad. I think Russia wants to convey a symbolic message to the world by improving its cultural image. I believe it mainly seeks to obtain funding from international organizations, foremost of which is UNESCO, among others.”

Fansa explained, “These are huge funds that are usually allocated to the management of internationally protected sites, but they [could] seep into the pockets of the usual corruption system of totalitarian regimes such as Russia and the Syrian regime. The latter two parties lack the minimum standards of transparency and accountability, and the discovery of new archaeological sites by excavation could have the greatest impact on feeding Russian museums a new batch of antiquities.”

He noted, “Meanwhile, Iran also has a share in Syria, albeit smaller, and Iran’s objectives in Syria differ from Russia’s. The operations of looting antiquities and excavating lands and archaeological sites are being carried out by all parties in Syria — the Russians, the Shiite militias and the Turks.”

Fansa pointed out the Syrian Antiquities Law granted wide powers to archaeological research centers and explicitly prevented the excavation of artifacts discovered through foreign missions except for examination, so long as they are returned to national museums. “But as far as I know, some artifacts made their way out [of Syria] and never made their way back.”

Ahmed Hassan, a Syrian journalist residing in Turkey, told Al-Monitor, “Russia is currently focusing on ways to avoid international sanctions, and it thus targets the health, education and antiquities sectors in Syria. It also seeks UN funding, which is only possible in the aforementioned sectors. Russia further aims to give a civilized cover to the Russian military participation in Syria.”

He explained, “Through such steps, Russia uses propaganda to refute the accusations of killing civilians with its bombs. Its objectives are mostly economic, represented in the possibility of attracting international funding and to improve its image.”