Russia has begun a project to rehabilitate Syria’s ancient city of Palmyra in its latest efforts to gain a foothold in the country’s vital sectors. 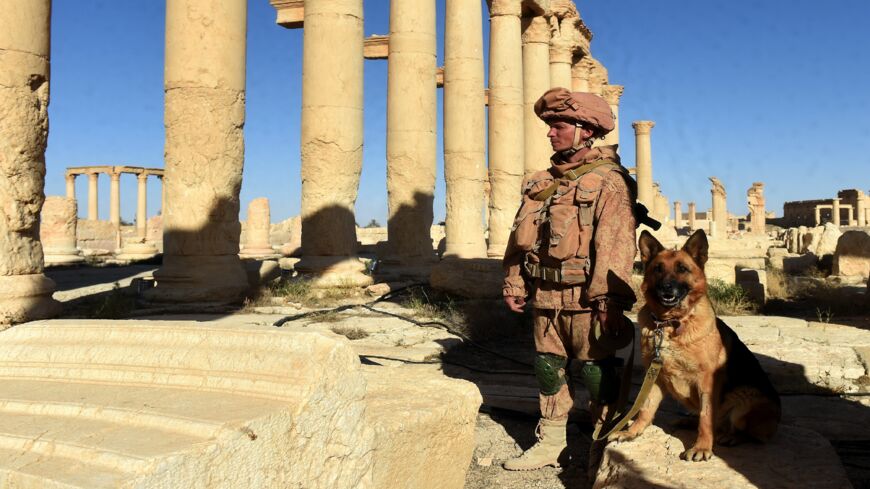 Pursuant to three agreements signed with the Syrian government, Russia has announced the start of a project to restore artifacts from the ancient city of Palmyra in the eastern countryside of Homs in central Syria.

The first agreement, founded in November 2019 between the State Hermitage Museum in St. Petersburg and the Directorate-General for Antiquities and Museums, is to restore the Archaeological Museum of Palmyra and its collections.

The second agreement, with the Russian Academy of Sciences Institute of Material Culture, is to train Syrian staff and exchange information on image-based 3D modeling when assessing the damage caused by the Islamic State (IS). The Association Stone Industry of Russia signed the third agreement in November 2020 to restore the Arch of Triumph in Palmyra.

The outbreak of COVID-19 in 2020 prevented the implementation of the agreements.

Syrian media outlets quoted Dmitry Medyantsev, the project manager in Palmyra, as saying on June 13 that Russian experts taking part in the restoration of the ancient city have already completed the first stage of the project, which includes measurements and ground surveys. In the second stage, they will remove the rubble, scan the fragments of destroyed monuments and prepare an inventory. The Russian experts will create an interactive model of the city, which will reveal the missing parts to be re-created, he added.

In this context, Mohamad Hasan al-​Ayid, director of the Palmyra News Network, an opposition-affiliated media outlet in Palmyra, told Al-Monitor, “The Russian interest in Palmyra began when IS was still controlling the city. At the time, Russia supported the regime forces in regaining control of Palmyra. The Russian forces oversaw the demining efforts and removal of explosive remnants of the war in the city. [After IS was expelled in 2016], Russia showed interest in the restoration of the ancient city, part of which IS destroyed.”

“IS destroyed the Temple of Bel, the Temple of Baalshamin and the Arch of Triumph, in addition to several artifacts displayed in the city’s museum. In early [2017], the terrorist group destroyed the Tetrapylon, which the UN labeled a war crime. Meanwhile, regime forces also targeted archaeological sites in the ancient city under the pretext that IS cells were hiding there,” he added.

Ayid continued, “In addition to its cultural importance, Palmyra is located near the phosphate mines and gas fields, making it a priority for Russia. The city has turned into a hub for archaeological excavations. We have no idea about the fate of the artifacts after the regime’s control of the city and the entry of Russian and Iranian militias. We do not know the extent of the destruction or the number of stolen artifacts. Russia has transferred hundreds of artifacts, including the Lion Statue, to Damascus for restoration purposes. More than 60 funerary reliefs and portraits, which IS destroyed, have been under restoration by Syrian experts at the National Museum in Damascus. Yet field visits and surveys are required in large parts of the city so as to assess the damage.”

Nasr al-Yousef, a Syrian-Russian journalist based in Moscow and an expert on Russian affairs, told Al-Monitor, “The most prominent Russian statements on Palmyra were made in 2016 when Russia urged UNESCO to help restore the ancient city. Also, then-Russian Deputy Foreign Affairs Minister Gennady Gatilov met with UNESCO Director-General Irina Bokova in May 2016 to discuss a plan to dispatch international experts to Palmyra to assess the damage.”

“Moscow put forward a 3-D model of the city, including the [Roman] theater and the Temple of Bel. Natalia Solovyova, deputy director of the Hermitage Museum, says that the model would allow to assess new excavation sites, study the city planning and reconstruction costs without being present in the city,” he added.

Yousef went on to say that “in early August 2020, 12 Russian experts arrived in Damascus with the aim of supervising archaeological excavation works and assessing archaeological sites in Palmyra. Contracts were signed with 35 Syrian experts to carry out excavations. On Sept. 17, 2020, the team found 28 artifacts that were extracted within 48 continuous working hours. Then they were moved to 30-meter-long and 20-meter-wide warehouses built at the Palmyra military air base where the artifacts were hosted until the arrival of cargo aircraft where the artifacts were loaded.”

“With this, Russia seeks to draw the attention of the world to the destruction incurred in Palmyra in order to obtain restoration funds, although it does not have the experience in restoration of antiquities. Moscow also aims to take hold of the city through antiquities and the reconstruction process, to steal the UNESCO funds and open new investments in the city. Previously, most of the missions working in Syria were mainly German and French, in addition to some Japanese, Belgian and US ones. Russia only had one mission operating intermittently in Tell Khazneh in Hasakah. We have not seen any scientific publications by [this Russian] mission,” he added.

Russia seeks to control most of the sectors in Syria that would serve its economic interests in the future. Moscow shows special interest in the city of Palmyra and the city’s monuments, given its touristic importance and the possibility of implementing major projects should the situation become stable in the country. The Russian army built a military base within the ancient city of Palmyra in order to prevent the Iranian militias from seizing the area.

Wael Olwan, a researcher at the Istanbul-based Jusoor Center for Studies, told Al-Monitor, “Russia seeks to take hold of all dossiers that would generate economic gains in Syria, including raw materials, the reconstruction file and tourism, which is mainly centered on the Syrian coastal and archaeological areas. It also seeks to show that the Syrian regime is the one that won the battle, that it is actively seeking to achieve social stability, and that Syria’s tourism and investment projects have begun their recovery. Russia is trying to keep Iran away from the ancient city because the militias stole and smuggled antiquities through Lebanon. Since Russia is in control of the area, it seeks to prevent such operations from taking place so as to avoid any accusations in this regard.”