UNESCO steps in to protect what's left of Syria's Palmyra

Countless antiquities have been obliterated in the fierce fighting and rampant destruction in Syria, where the famous Palmyra archaeological site has lost a devastating portion of its treasures. 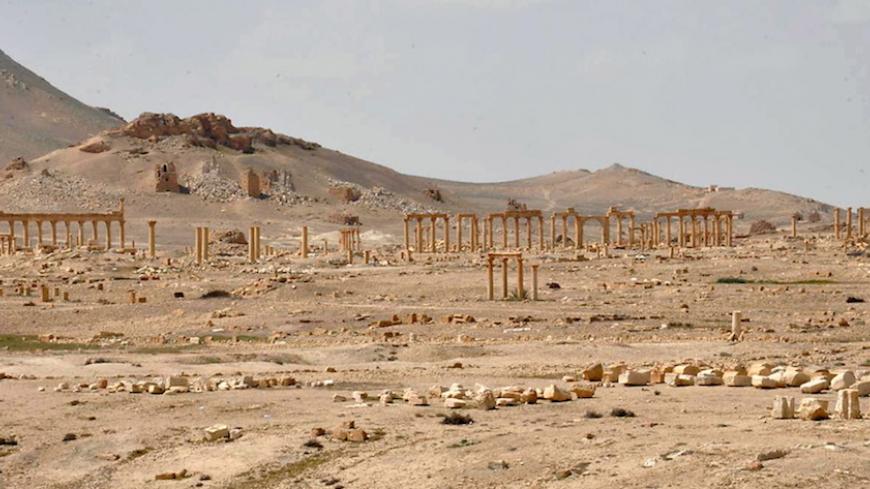 Part of the historic city of Palmyra is seen in an image provided by SANA on March 27, 2016. - REUTERS/SANA/Handout

ALEPPO, Syria — The city of Palmyra's archaeological heritage has been severely battered — but not destroyed — after years of fighting in Syria, experts say.

Until recently, Palmyra was one of Syria's most important tourist attractions. Before the Syrian revolution broke out in March 2011, the city, which dates back to the beginning of the second century and is registered on the UNESCO World Heritage List, attracted tourists from around the world.

But the city in central Syria, just 243 kilometers (150 miles) from Damascus, has been devastated by airstrikes and missile attacks by regime forces that wreaked havoc on its archaeological structure, while the Islamic State has deliberately destroyed some of its ancient landmarks.

Palmyra was controlled by regime forces until IS launched violent attacks and took over the city on May 20, 2015, after a week of fighting. IS members destroyed numerous archaeological landmarks, blowing up the famous Arch of Triumph. The shrine of Baal Shamin and the 2,000-year-old Temple of Bel were destroyed, along with the famed Lion God statue at the entrance of the Palmyra Archaeological Museum.

UNESCO recently sent a mission of experts headed by Mechtild Rossler, director of UNESCO’s World Heritage Center, to take preliminary stock of the destruction. The group noted that most statues and sarcophagi that were too large to be removed for safekeeping were defaced, smashed, their heads severed and fragments left lying on the ground.

The experts confirmed that the Mamluk-era citadel overlooking the city had sustained serious damage. The mission had to examine damages to the Temple of Bel from a distance, as the edifice is still inaccessible and operations to remove the mines IS planted in the city before pulling out have not been completed. Yet the mission determined that despite the destruction, the archaeological site of Palmyra retains a large part of its integrity.

UNESCO said it will work with partners to take emergency safeguarding measures for the remaining treasures.

“Palmyra is a pillar of Syrian identity, and a source of dignity for all Syrians. UNESCO is determined to ensure the safeguarding of this and other sites with all partners as part of broader humanitarian and peace building operations,” said UNESCO Director-General Irina Bokova in a news release.

The Wall Street Journal reported in its April 4 story "Hope for Palmyra's future" that plans to restore the ancient treasures could include some cutting-edge technology, and UNESCO will sponsor a campaign to raise some of the required funds from private donors, foundations and governments. UNESCO and its partners, including the Institute for Digital Archaeology, can use drones to survey damage and create 3-D computer models. The information would be provided to Syria, with the hope that Syrians will lead the reconstruction.

In the meantime, however, “the situation in the ancient city of Palmyra is catastrophic, and what happened is a disgrace and an exchange of roles between the regime and religious extremists," Anas al-Miqdad told Al-Monitor. Miqdad is the director general of antiquities, museums and heritage in the opposition Syrian interim government and a researcher at the Sorbonne in France.

"The regime’s forces handed Palmyra to IS [in 2015] without a fight and then decided to re-enter it again in what may be described as a theatrical performance. Before IS took over the city, the regime forces had bombarded archaeological sites in the city from the citadel. The regime also shelled the shrine of Baal Shamin and the Temple of Bel, as well as old buildings downtown.” IS also completely destroyed those landmarks along with seven tower tombs and the Arch of Triumph, he said, adding, "This is a major disaster for the city of Palmyra.”

He noted the Assad forces' role in the destruction in various parts of the country. “The regime forces have bombarded most of the ancient buildings and the urban fabric in Syrian cities and villages. The ancient city of Aleppo is a living example. Large parts of its old market, the Umayyad Mosque and its minaret and parts of Aleppo Citadel were destroyed. The regime warplanes bombed numerous archaeological edifices, including ancient mosques, residential buildings and houses.”

The deteriorating security situation in Syria halted the flow of Arab and foreign tourists, which represented an important resource for the state before the revolution began. Palmyra was an important hub for tourism. The number of Arab and foreign tourists gradually declined in early 2011, and a faster drop was registered in the second half of the same year. By 2012, tourism was almost nonexistent.

“Tourism was an important source of the state's financial, cultural and scientific resources before the revolution. In light of the current raging war, tourism has dropped to zero,” Miqdad said.

Amid the chaos and the security vacuum in the country, trafficking in antiquities has thrived, especially in locations controlled by IS. Reports say IS is hiring civilian workers in the areas under its control to excavate works in return for $5 per site, taking advantage of the civilians’ dire need for money.

Trade in antiquities in neighboring countries has risen, turning those countries into a magnet for foreign archaeologists seeking to buy artifacts smuggled from Syria. IS sends the pieces through its agents to Gaziantep in Turkey, where they are sold in secret to Turkish traders.

“Trafficking in antiquities is a shameful act," Miqdad said. "Traffickers are selling the history and heritage of our country. The biggest loser is Syria, which is being drained of its heritage and antiquities."

As traffickers empty Syria of its ancient wealth and IS destroys the remaining archaeological sites, the Syrian regime has helped to destroy its cultural heritage by frequently targeting the most important cultural landmarks and archaeological sites in the country. On May 12, regime aircraft bombed Qalaat Semaan (Saint Simeon’s Church), west of Aleppo, causing significant damage.