Putin's decision to appoint a new special envoy for developing relations with Syria likely has several aims, including to balance military and diplomatic involvement in Russia's Syria policy. 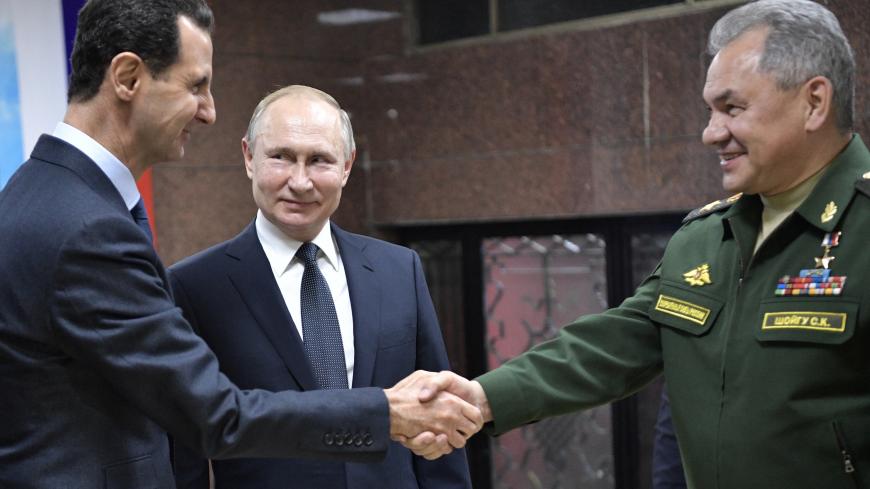 Russian President Vladimir Putin appointed Moscow’s ambassador in Damascus, Alexander Efimov, as his special envoy for developing relations with Syria on May 25. It is a newly created post and an addition to the two already existing envoys working with Damascus, the Kremlin’s special envoy for Syria Alexander Lavrentiev and its special presidential envoy on the Middle East, Deputy Foreign Minister Mikhail Bogdanov. Efimov will keep his job as Syrian ambassador, a position he has held since 2018. Prior to the assignment, Efimov spent five years as Russia's ambassador to the United Arab Emirates.

Efimov’s appointment can be viewed through two lenses. First, it may serve to help the Kremlin find the right balance between the diplomatic and military segments of Russia’s foreign policy team overseeing Syria. Lavrentiev, until recently the only presidential representative focused exclusively on the Syrian dossier, is generally associated with the military side. His mission has involved hashing out compromises in negotiations with Turkey and Israel as well as the creation and management of the so-called “de-escalation zones” mandated by the Astana and Sochi agreements, the purpose of which being to essentially fragment the opposition to President Bashar al-Assad. Lavrentiev has also been trying to nudge Assad into making symbolic concessions necessary to keep the Constitution Committee's work afloat.

The creation of the Astana platform itself is the brainchild of the Russian military in Syria, eager to squeeze as many dividends as possible from the protracted conflict in the country. More pertinently, the military wants to see further budget increases to the boost armed forces and solidify Russian positions in the Middle East. From the perspective of achieving political compromise in Syria, however, the military's approach is hardly justified. Pursuing peace through the disarmament of the opposition groups and subsequently incorporating the rebels into the Russian-controlled 5 Corps may at first glance look like a valid compromise. It sounds like a good plan to the backers of Assad’s regime. However, those proposals make Russia appear less an arbiter who can motivate elites in Damascus to make compromises and more an ally to (or even the part of) the Syrian military.

Moreover, the Russian military in Syria has a PR problem. Its accusations against the United States lack weight, not least due to a reputational hit it suffered following a series of high-profile gaffes when Russian state channels presented video game clips as war footage. The Defense Ministry’s attempts to deny any success by the US-led international coalition in fighting the Islamic State in Syria also face doubts. At times even the Kremlin, mindful of its own publicity, sought to distance itself from the ministry’s stance. The killing of Islamic State leader Abu Bakr al-Baghdadi is one example. Initially the Kremlin supported the Defense Ministry, casting doubts on the US account of Bagdhadi’s killing. Yet later presidential spokesperson Dmitry Peskov contradicted those claims.

Seen in this fashion, Efimov’s new post could be considered a counterweight to the military influence in Russian foreign policy. The new envoy can bring a more economic and diplomatic component to the task of managing the situation in Syria.

The second aspect of Efimov’s appointment has to do with the task of rebuilding Syria, a topic that has been steadily rising on the Kremlin’s agenda. Efimov’s past experience of working with the United Arab Emirates, an ally of growing importance to Russia and Syria, may also prove useful. It is notable that on Putin's last trip to Syria in January, he decided to touch down at Damascus International Airport despite lingering security threats, in what was perhaps a sign that the airport may be scaling up its operations. Indeed, last year several airlines, among them Bahrein’s Gulf Air and UAE’s Emirati Etihad, mulled the possibility of resuming flights to Damascus Airport. Russian businessmen, for their part, showed willingness to bankroll the airport’s expansion via building an additional terminal. According to some reports, Russia even asked Israel to cease targeting the airport. In return, Moscow said it might help reduce the volume of Iran’s supplies through Damascus.

The UAE has relayed to Moscow its willingness to play a part in rebuilding Syria's war-ravaged economy that has experienced further strain thanks to Western sanctions. Both Russian diplomats and Syrian civil servants have been engaging in dialogue with Abu Dabi officials. At one point, Damascus Governor Alaa Ibrahim mentioned interest expressed by some Emirati and Jordanian real estate companies to implement several projects in Daraya. The recent appointment of Talal al-Barazi as Syria’s minister of local trade and consumer protection, replacing the much-criticized Atef al-Nad (an official linked to the notorious Rami Makhlouf), also has ties to the UAE.

Efimov’s UAE background, together with his knowledge of civilian and diplomatic affairs, makes him a helpful addition to the list of special envoys. He can bring his connections and unique perspective to feed information and analysis directly to the Kremlin, bypassing the Foreign Ministry and other bodies. It also strengthens the institutional position of the Russian Embassy in Syria. From now on, Damascus has to keep in mind that it is Russian diplomatic specialists, and not just military officers or private military contractors, who handle Moscow's Syria dossier.

Last but not least, Efimov’s appointment serves to further tighten Putin’s grip over Syrian affairs and solidify his role as a final arbiter in key decisions in this area of Russian foreign policy. By expanding the circle of his envoys, the president wants to make sure he is presented with a diverse set of views on the situation in Syria, as well as with different perspectives on Russia’s potential courses of action. And it all makes Putin’s personal preferences the ultimate and ever less predictable factor in defining Moscow’s’ strategy.