Key players involved in the Russian Foreign Ministry's Middle East policy are changing positions, and there will be a new ambassador to Syria; will this also involve policy change? 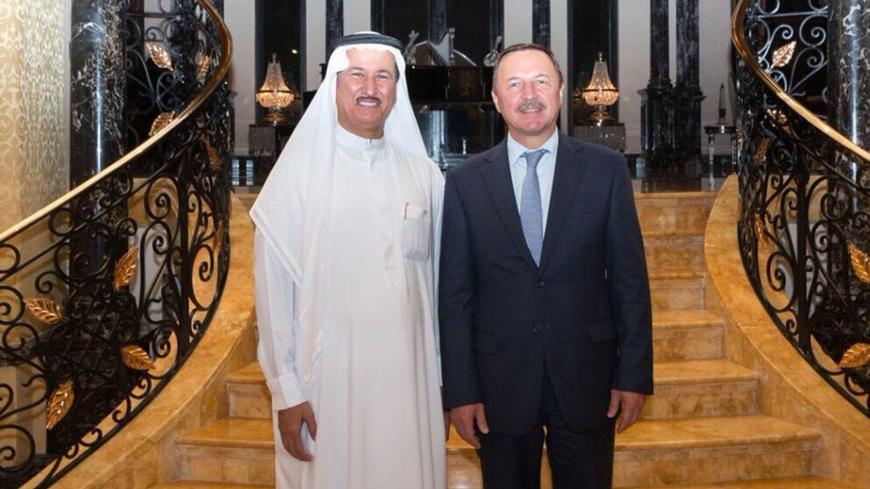 Alexander Efimov (R), Russia's ambassador to the United Arab Emirates, is seen in an image uploaded June 6, 2017. Efimov has been named ambassador to Syria. - Twitter/@HussainSajwani

MOSCOW — Russia is replacing its ambassador to Syria. Many believe that Alexander Kinshak, 56, who has served in the Damascus post since 2014, will be appointed next month to lead Russia’s Foreign Ministry Department for the Middle East and North Africa (MENA). Alexander Efimov, 59, Russia’s current ambassador to the United Arab Emirates (UAE), will take over as ambassador to Syria. The shift comes amid bigger swaps in the MENA department that have been taking place this year.

On March 27, MENA Department director Sergey Vershinin, 64, was appointed deputy foreign minister — a position that became vacant when Gennady Gatilov, 68, was appointed to be Russia’s permanent representative to the UN Office and other international organizations in Geneva. The Geneva post had been previously occupied for seven years by Alexey Borodavkin, 68, whom President Vladimir Putin appointed as ambassador to Kazakhstan in February.

Some Russian media outlets titled their reports on the coming appointment of Efimov as “Lavrov lobbies for a peace-making ambassador to Syria,” stressing Moscow's need for a comprehensive postwar approach in its Syria policies. (Sergey Lavrov is Russia's foreign minister.) The departing ambassador has long been a troubleshooter type of diplomat for Russia in the region. Having started his diplomatic career in 1988, from 2002-2004 Kinshak served as minister counselor of the Russian diplomatic mission to Iraq and then led the embassy in the country as charge d'affaires; Putin honored Kinshak with the Order of Courage for his service in Iraq. From 2004-2008 Kinshak served as deputy director for the MENA Department in Moscow, and then was designated back to the region as ambassador to Kuwait from 2008-2013 before moving to Syria in 2014.

As ambassador to Syria, Kinshak was instrumental in conducting Russia’s diplomatic efforts on the Syrian track, including talks with Damascus over arms supplies for Assad and Russian military facilities in Khmeimim and Tartus, as well as negotiations with Kurds and Americans. In February, he warned of an impending US attack on Syria in order to “undermine efforts on political settlement [in the country]."

“Recently, the issue of Syrian government use of chlorine and sarin in eastern Ghouta and Idlib has been spun [in the media]. Given the notorious experience of the [April 2017] Khan Sheikhoun incident, we cannot rule out that this is an effort to launch a new military attack on Syria to prop up losing militants and undermine political settlement,” he said in February.

For his distinguished service in Syria, Kinshak was honored with another state award — the Order of Honor. But as the situation on the ground has been changing, his public profile gradually decreased. His successor in Syria brings a different background and toolkit. Efimov, who started in the Foreign Ministry in 1980, also previously followed in Kinshak’s footsteps when he served as deputy director for the Foreign Ministry’s MENA Department from 2010-2013 before becoming ambassador to the UAE. From 2004-2008 he was Russia’s minister counselor in Jordan.

Efimov’s focus in Abu Dhabi was primarily on economic cooperation between Russia and the UAE and he helped establish a $7 billion joint bilateral investment fund. Thus, his experiences and contacts may come in handy now that Russia seeks regional and international funding for the restoration of Syria. Russia and Syria are also developing a road map on economic and trade cooperation to boost Syria’s economy and development in the postwar stage. All of this will require the design of multiple projects and obtaining financing for them. A shift in the ambassador's role in Damascus from being a “war manager” (as Kinshak was seen) to being an “economic manager” (as Efimov is seen) is a move in that direction.

The shifts in the apparatus come as Russia eyes its next steps in Syria, particularly the supply of S-300 systems to create a layered air defense system. Lavrov said the decision had been triggered by the US-led strikes on Syria.

“Now, we have no moral obligations. We had the moral obligations, we had promised not to do it some 10 years ago, I think, upon the request of our known partners,” said the Russian foreign minister, alluding to his country's agreements with Israel, the latest in 2010, when Israel asked Russia to annul an existing supply contract with Syria.

A source in the Russian Foreign Ministry who agreed to comment on the issue of diplomatic changes on condition of anonymity dismissed the idea there are bigger policy goals behind the chain of new appointments.

“It’s just technical procedure. People come, people go, no one got fired or anything, people instead got promoted, which may mean the Kremlin appreciates their performance.”

Another source with insight into the issue who spoke to Al-Monitor not for attribution said that if any policy changes involving Syria do occur, they won't be due to new appointments within Russia's Foreign Ministry.

“The Syria file is a prerogative of the Russian Defense Ministry, not the Foreign Ministry. It would be [Deputy Foreign Minister Mikhail] Bogdanov, Vershinin, Gatilov, and [now, possibly, Kinshak] who would be important diplomatic go-tos on the Syria track but the actual policymaking wouldn’t come from them.”