The surprise resignation of the Russian Cabinet and a possible new role for Putin when his presidential term ends in 2024 raise questions about possible changes in Russian foreign policy. 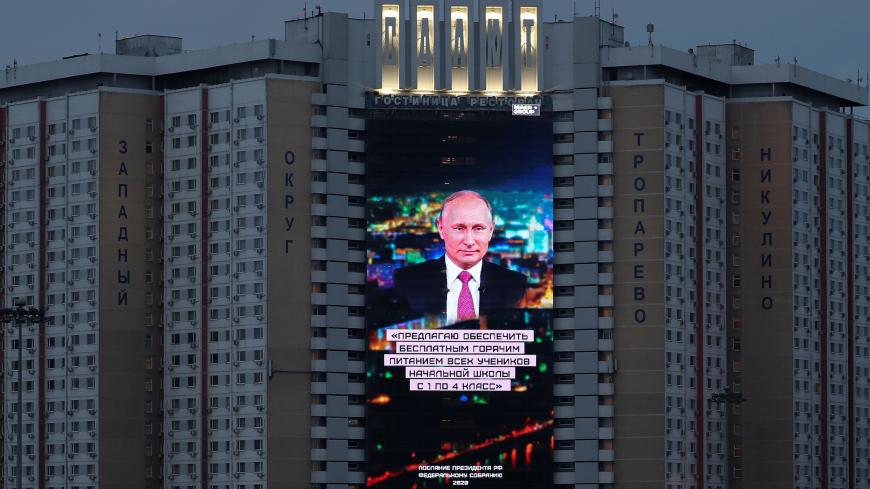 An electronic screen installed on the facade of a hotel shows an image of Russian President Vladimir Putin and a quote from his annual address to the Federal Assembly in Moscow, Jan. 15, 2020. - REUTERS/Evgenia Novozhenina

In his state of the nation address, Putin proposed a set of constitutional changes that should soon be voted on in a national referendum. The changes would limit future presidential tenure to two terms in office, tighten residency requirements for presidential candidates and empower the parliament to choose candidates for prime minister and the Cabinet. This essentially weakens the institution of the president but empowers those of the parliament and the State Council, or Gossovet. Now a consultative body, under the new structure the State Council would acquire a higher status and be part of the executive power.

“All of the amendments Putin initiated seek not to consolidate his own powers when he will have to leave the presidential post in 2024 but rather to create mechanisms that would allow him to regulate disagreements with a future president, should they arise,” said Tatiana Stanovaya, an expert with the Moscow Carnegie Center.

Others, however, said they thought Putin, 67, was seeking a means to extend his hold on power.

The top-level changes sent immediate shock waves throughout Moscow. It was long expected that Putin would come up with a transition model sometime in 2020, but few expected it to be this early in the year. The freshly appointed prime minister — Mikhail Mishustin — came as yet another shock to some and disappointment to others. Mishustin, who until recently served as Russia’s tax service chief, is little known to the general public; he has no political experience and never has been part of Putin’s inner circle.

Stanovaya, who is also a founder and head of R.Politik, a platform on the inner workings of Russian foreign and domestic politics, told Al-Monitor, “Mishustin looks a lot like Mikhail Fradkov and Viktor Zubkov, the technocratic premiers [in Vladimir Putin’s presidency] of the early 2000s. Putin’s logic in cases like this has always been to wait until a few months before elections before revealing the name of his successor — remember the ‘switch’ with Medvedev in 2012. It’s very hard to imagine that a future president could take part in an electoral campaign after four years as prime minister — the risks would just be too great. It seems highly likely that Mishustin is just a technocratic placeholder.”

In his speech, Putin emphasized that regardless of the changes, whoever is the president will remain commander in chief and retain control of all of the security agencies.

At this stage, the key unknowns in foreign policy are who might take over from Lavrov and Shoigu.

Lavrov, 69, has long been asking for a successor. Potential candidates said to be eyed for this role are three of his deputies: Sergey Ryabkov, 59, who has a big portfolio from relations with the United States, the Joint Comprehensive Plan of Action with Iran and arms control; Alexander Grushko, 64, a former envoy to NATO who is in charge of the European file; and Vladimir Titov, 61, who officially deals primarily with administrative issues but who is believed to have strong ties to the Russian security services.

“We were told a while ago that Lavrov’s departure is possible and may be expected in the spring,” a source in the Foreign Ministry, speaking not for attribution, told Al-Monitor.

“The names of the three deputies are frequently thrown around, Denisov’s is less so these days,” the source added.

Andrey Denisov, 67, is Russia's ambassador to China. At some point shortly after Putin’s reelection in 2018, Denisov was eyed as a possible successor to Lavrov.

Another diplomatic source told Al-Monitor that Lavrov may remain foreign minister. “Lavrov has been in his position since March 2004. Ever since, governments resigned on a couple of occasions only to resume their performance with some fresh faces, but he would always be there. If we see this new government as transactional, he may as well stay. His style, his whole persona adds some special flavor to Russian diplomacy, so if he leaves it’d be a loss, but after all it’s the president who is in charge of top foreign policy decisions, not the foreign minister,” the source said.

It’s even less certain at this point on how things may work out for the Defense Ministry, which has virtually hijacked a huge part of Russia’s Middle East agenda. But just like the prime minister, both the foreign and defense ministers can be “technical” and “temporary” — a lot depends on who the people are, how close they might be to Putin and whether they have powerful allies within the system.

Interestingly, shortly after the Cabinet resigned, Chechnya leader Ramzan Kadyrov temporarily left office due to what he called his "temporary incapacitation." It has long been rumored that Kadyrov, who has played some critical roles in Russian policies across the Middle East, could take up a higher position.

Medvedev, who has been appointed deputy to the chairman of the Security Council, should not be entirely discarded. Putin chairs the council and his longtime ally Nikolay Patrushev is the secretary. Medvedev is virtually placed in between the two. Although this could be a rather awkward spot for him, Medvedev may find himself in an important position when it comes to foreign policy issues.

In April 2018, Al-Monitor reported on a big shake-up Moscow carried out involving the diplomatic corps working on the Middle East file. In September 2019, Putin appointed a commander for Syria and introduced some changes in military management. The policy patterns for the Middle East that have been seen since seem likely to stay for some time as what appears to be a gradual and soft transition process begins.