Islamic State carries out attacks across Iraq, including near Baghdad

The Islamic State hits Iraqi security forces across the country May 2 and 3, including ones relatively close to the capital. 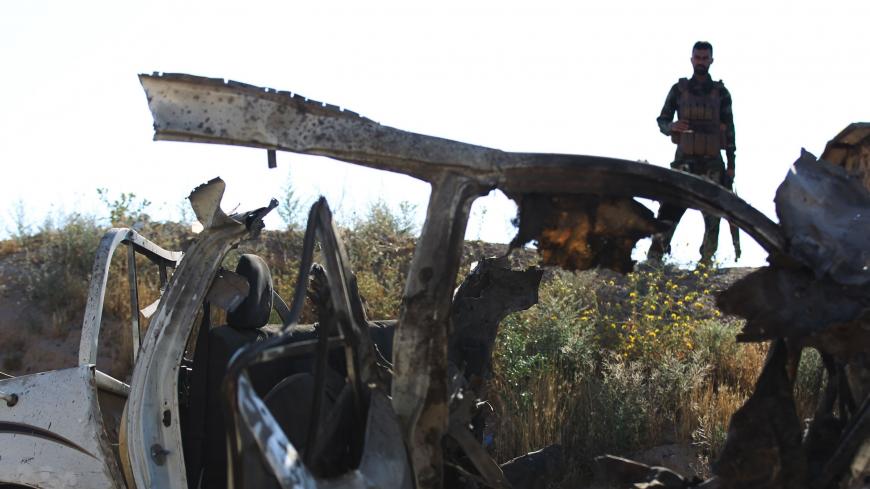 An Iraqi fighter with the Popular Mobilization Units (PMU) inspects the site of the Islamic State (IS) group attack, a day earlier, on a unit of the paramilitary force in Mukaishefah, about 180km (110 miles) north of the capital, on May 3, 2020. - AHMAD AL-RUBAYE/AFP via Getty Images

The Islamic State (IS), which has increased its activity during the coronavirus lockdown, launched a series of simultaneous attacks on Iraqi security forces throughout the country that went from early Saturday morning into Sunday. Much of the fighting took place in areas the group once controlled in northern Iraq, but IS also conducted operations closer to the capital, Baghdad, than it has been in recent years.

On Sunday, IS attacked Popular Mobilization Units (PMU) in Dujail, about 44 miles (70 kilometers) from Baghdad. The PMU said tribal forces joined it in defending the town, and tweeted photos of allied fighters in traditional garb. The PMU said it received multiple assaults on its positions outside the city of Samarra on Saturday. Iraqi forces do not always name IS when making reports about attacks, and it is possible some non-IS militants disgruntled with the government and the PMU were behind the attack. Samarra is about 80 miles (125 kilometers) north of Baghdad. The PMU also reported deadly fighting alongside Iraqi security forces Saturday in Yathrib, about 50 miles (85 kilometers) north of Baghdad.

IS has undertaken attacks on Baghdad in the past. In 2017, an IS suicide bomber killed 36 in a Baghdad market. However, security has improved significantly there since then, and the assaults in Dujail and Yathrib are the closest IS fighters have come to Baghdad in several years.

Iraq’s Security Media Cell, an official security body that reports on IS attacks, also said that IS attacked a police station in Zaghaniya on Saturday. Zaghaniya is a little north of Baquba, a city 35 miles (56 kilometers) north of Baghdad.

The Security Media Cell said that on Sunday, IS attacked the PMU near al-Eith south of Tikrit, which is 96 miles (155 kilometers) north of Baghdad. The PMU reported Ad-Dawr, also south of Tikrit, as one of the areas where it sustained attacks in alongside Iraqi security forces Saturday. The Security Media Cell reported fighting between IS and the PMU on Saturday in Mukeshefah, also south of Tikrit. A photo released by the PMU purportedly shows its missiles hitting an IS pickup truck there during the battle.

Tikrit is a predominantly Sunni Arab city. Former President Saddam Hussein, along with many of his closest advisers, were from there. IS controlled the city from mid-2014 to mid-2015.

Some of the attacks also took place in and near the disputed Iraqi-Kurdish territories in northern Iraq. Iraqi security forces clashed with IS in Jalawla on Sunday night. Jalawla, in eastern Iraq, is a disputed territory between the Kurdish and federal governments. It is only about 30 miles (50 kilometers) from the Kurdistan Region border. An IS propaganda channel on the encrypted messaging service Telegram showed a uniform, a rifle, body armor and ammunition the group apparently took from an Iraqi soldier there.

Iraqi security forces also fought “terrorists” in Dellia Abbas, near Jalawla, on Sunday, according to the Security Media Cell. Tthe PMU said it and Iraqi security forces fought enemy fighters Friday in Tel al-Dhabab between Tikrit and Erbil, the capital of Iraq’s Kurdistan Region. The PMU also reported that it fought in Matibija, south of the disputed city of Tuz Khormato, on Friday.

Kurdish forces took control of most of the disputed territories in 2014 following IS’ sweep through northern Iraq. In 2017, following the Kurdistan independence referendum, federal forces retook these areas. Many of IS attacks since its territorial defeat in 2017 have been in these regions, specifically in rural areas between Iraqi and Kurdish forces’ positions.

IS also stepped up its attacks in April during the coronavirus lockdown in Iraq, beginning operations against Iraqi security forces’ checkpoints and positions. IS attacks in recent years had previously been generally limited to small villages.