Islamic State steps up attacks in Iraq during coronavirus lockdown

The Islamic State launched numerous attacks in Iraq's disputed territories in April amid a lockdown to stop the spread of the coronavirus. 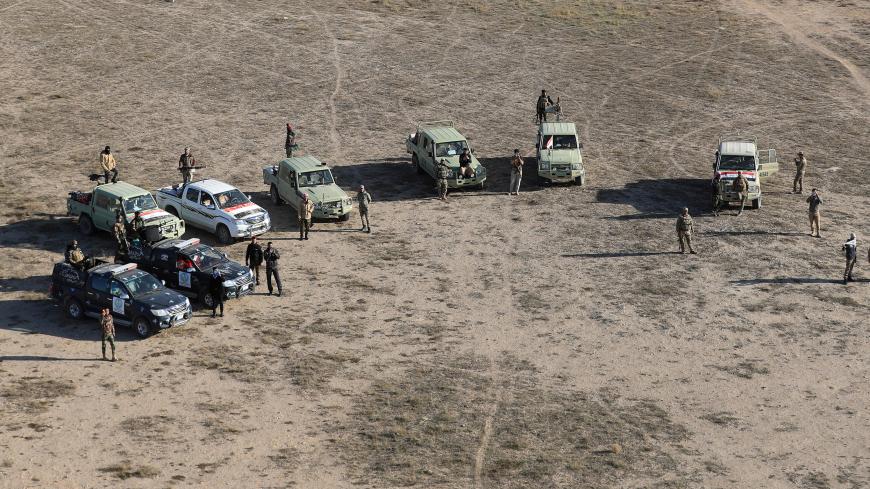 Iraq has been hit by a wave of Islamic State (IS) attacks during the country’s coronavirus lockdown.

Numerous operations by IS and unknown groups have occurred in Iraq’s disputed territories in April. Iraqi security forces and the US-led anti-IS coalition have also attacked the group several times this month. One journalist in the disputed city of Kirkuk said the uptick began after the government imposed a curfew March 17 to fight the spread of the virus.

“The state of emergency consisted of a long-term curfew in the city and outskirts. That led to an increase of IS activities,” journalist Dana Mahmoud told Al-Monitor.

Authorities implemented a lockdown in March to mitigate the spread of the coronavirus. The lockdown has remained in effect through April, when the string of attacks occurred. The Iraqi government has now eased some aspects of the lockdown.

The following is a list of IS attacks and operations against Iraqi security forces and the international coalition in April, as well as the latter's attacks against IS:

IS activity is mostly taking place in the disputed territories of northern Iraq, of which oil-rich Kirkuk is the most populous city. Both the Kurdistan Regional Government and the federal government in Baghdad claim the territories. Kurdish forces took control in 2014 when IS swept through northern Iraq, but Iraq retook the territories in 2017, following the Kurdistan independence referendum. Many of the IS attacks that have occurred since its territorial defeat in 2017 have been in these areas.

Mahmoud attributed the attacks to IS “sleeper cells” that are active in Hawija, southwest of Kirkuk. IS is infamous in Hawija for a video that showed the beheadings of Kurdish soldiers in 2015.

As the Iraqi Security Media Cell pointed out, it is possible that not all of the recent attacks are from IS. One analyst said that anger in the Sunni community against Shiites, who dominate the government and the PMU, and Kurds in the disputed territories could be launching attacks independent of IS.

“The disputed regions of Iraq have witnessed significant sectarian and ethnic turmoil,” Nicholas Heras, the Middle East security program manager at the Institute for the Study of War, told Al-Monitor. “There are many disaffected Sunni communities there and no shortage of potential gunmen from local tribes who want revenge against Kurds and Shia.”

Heras said that IS has “reconstituted” itself in northern Iraq, having kept enough soldiers alive during its war against Iraqi and international forces. IS has gained confidence recently and maintains capabilities in Iraq, according to him.

“What has changed recently is that ISIS has felt strong enough to carry out more complex attacks closer to major urban areas in the disputed Iraqi zone, which should worry Iraqi security officials,” Heras said, using an alternative acronym for IS. “This means that ISIS has enough local community and a large enough network in these disputed areas of Iraq that it can strike when it wants, increasingly where it wants, and with more force.”

Lawk Ghafuri, a journalist at the Kurdish Iraqi news outlet Rudaw, said that the attacks definitely constitute an increase. Whereas before IS attacked small villages, they are now attacking Iraqi security forces, according to him.

"We have always heard about ISIS attacking villages and civilians in those areas," Ghafuri told Al-Monitor, using another acronym for IS. "It's not quite often that we hear like now that they're attacking security forces convoys and members."

Ghafuri said IS is benefitting from security forces being busy enforcing coronavirus-related lockdowns in the disputed territories, where IS has long remained active.

These incidents come at an inopportune time in Iraq. The country is still struggling to form a government as Prime Minister-designate Mustafa al-Kadhimi works to build a Cabinet. Anti-government protests have continued from October, even with the curfews, and the global drop in oil prices threatens Iraq’s federal budget. There are also tensions between Kurdish parties in the Kurdistan Region over Turkey’s airstrikes against Kurdistan Workers Party fighters in the mountains. US military forces have also left many bases in the country since March amid tensions with Iran and its allies in the PMU.