A suicide bomber, reportedly an Islamic State member, detonated himself at an Iraqi intelligence building in the disputed northern city. 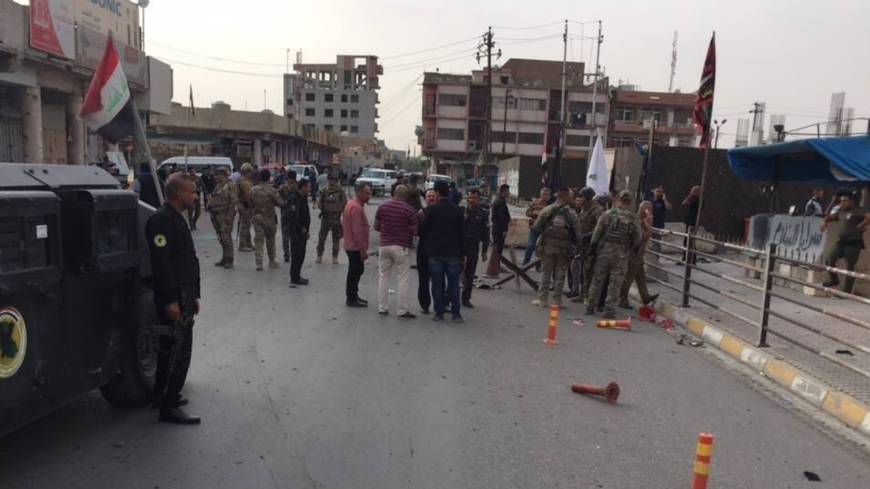 Iraqi security officials stand at the site of a suicide bombing in Kirkuk, April 28, 2020. - Twitter/IraqLiveUpdate

An Iraqi intelligence building in the disputed city of Kirkuk came under attack today, according to multiple reports.

The incident occurred when two men approached the building used by Iraq’s Intelligence and Counterterrorism Directorate in the northern city, one wearing a suicide vest, according to various reports. The man in the vest threw a grenade at the building and then detonated his vest, while the other drove away, the reports said. Three security forces members were injured in the blast, according to The Associated Press.

An anonymous Iraqi official told AP that the Islamic State (IS) carried out the attack. IS later took credit for the incident on one of its channels on the encrypted Telegram messaging service. The Kurdish Iraqi outlet Kurdistan 24 also reported IS’ claim.

Iraq’s Security Media Cell, a security body that reports to the prime minister, said in a statement that a “terrorist” blew himself up at the directorate, injuring two.

IS has carried out numerous attacks this month, many of them in Kirkuk province, while Iraq has been under lockdown due to the coronavirus. On April 12, IS shot and killed an Iraqi federal police officer in Hawija in southwestern Kirkuk province. IS also ambushed Iraqi security forces April 13 in a rural part of the province. The US-led anti-IS coalition also bombed IS locations in Kirkuk province April 13.

Kirkuk is one of the disputed territories claimed by both the Kurdistan Region and the federal government. IS is particularly strong in these areas of northern Iraq.

Most IS activity since its territorial defeat in 2017 has been in small villages and rural areas in Kirkuk and other disputed areas. However, this month, the group has shown its ability to strike Iraqi security forces, and now the city of Kirkuk itself.

The city of Kirkuk witnessed considerable violence for years following the 2003 US invasion. Kurdish peshmerga forces took over the city in 2014 after Iraqi forces fled the area following the IS takeover of Mosul and other areas, including parts of Kirkuk province. Iraqi forces reassumed control of the city and province in 2017 following the Kurdistan independence referendum.