Hamas is destroying houses in the Gaza Strip, as it considers them illegally built on government territories, while its understandings with Israel are ongoing despite Palestinian President Mahmoud Abbas’ announcement about halting all agreements with Israel. 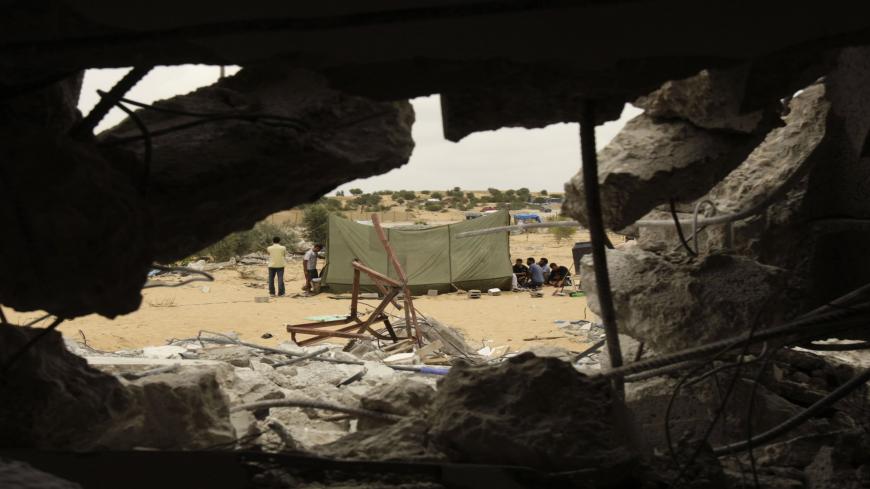 Palestinians sit in front of a house demolished by Hamas security forces in Rafah in the southern Gaza Strip, May 18, 2010. - REUTERS/Ibraheem Abu Mustafa

GAZA CITY, Gaza Strip — Bulldozers from the Palestinian Land Authority (PLA) affiliated with Hamas in the Gaza Strip demolished May 21 housing units in al-Qaraya al-Badawiya area in northern Gaza. The authority explained in a statement issued on the same day that the housing units “encroach on agricultural lands.”

PLA Director of Public Relations Amal Shamali told Al-Monitor, “These lands are the government’s property. They were rented out to citizens between 2010 and 2012 at a low price of $100 per year for every two dunams of land in order to establish agricultural projects and create new job opportunities for unemployed youths.”

Shamali noted that the demolition aimed at halting the ongoing housing violations, among other violations against government lands in the Gaza Strip.

Rami Mansour, owner of a housing unit that was demolished on these lands, told Al-Monitor, “After I lost my house in Shajaiya neighborhood in the east of Gaza City during the Israeli war on the Gaza Strip in 2014, I built a small house consisting of one room, a bathroom and a kitchen on a piece of land that I rented from the Hamas government for agricultural purposes. I was surprised when the PLA brought its bulldozers to destroy my house.”

Mansour noted that his now-demolished house is the only housing unit for his family of eight, including six children. He added, “Just like others whose houses were destroyed, I admit these lands are the government’s, but because of the bad living circumstances and our inability to rebuild our houses that were damaged during the war, we had to live here. I ask the government to provide us with houses that can shelter us and our children from the cold of winter and the heat of summer.”

On May 14, bulldozers demolished a house under construction for the Chaath family in the Chaouth area in Khan Yunis in southern Gaza.

Ahmad Chaath, owner of the destroyed house, told Al-Monitor, “We were surprised when dozens of police officers attacked the construction site in the early morning. When we tried to hold on to the columns of the house to prevent them from being destroyed, they beat us — men and women — and removed us from the site to destroy it.”

He said his family received the land on which the now-demolished house was built in 1942, based on an order from the British High Commissioner who ruled Palestine between 1920 and 1948, to live on it and cultivate it.

Chaath added, “We have lived here, generation after the other, for dozens of years. None of the parties that ruled the Gaza Strip since then — like Israel [1967-1994] and the Palestinian Authority [1994-2007] — forced us out. Now, Hamas, which is ruling Gaza, wants to kick us out.”

Hamas’ recent demolition of houses was faced with opposition from rights groups.

Saleh Abdel Aty, chairman of the International Committee for the Support of Palestinians' Rights, told Al-Monitor, “According to the law, citizens cannot be evacuated from lands registered in the name of the [British] High Commissioner. They require a compromise between the citizens and government rather than excessive use of force.”

Aty added, “Families that have been evacuated have the right to alternative housing from the Hamas government.”

On the political level, Hamas’ moves on the ground reflect its insistence on governing the Gaza Strip separately from the PA. Hamas is working according to Egyptian-brokered truce understandings reached with Israel at the end of March 2019. Meanwhile, President Mahmoud Abbas announced May 19 the end of all agreements, including security ones, signed with Israel and the United States, in response to Israeli plans to annex Palestinian territories.

Under the truce understandings, Israel would offer the Gaza Strip economic incentives to alleviate the siege imposed since 2007, in return for calm in Gaza and Hamas refraining from launching rockets at Israel.

Hamas leader Yahya Moussa told Al-Monitor, “The political agreements between Israel and the PA are in no way similar to Gaza’s understandings with Israel.”

He added, “Hamas and Israel have no agreements to renege on. They are just oral understandings under Eygptian brokerage that constitute an achievement for us. Our aim is to protect our citizens from any Israeli aggression and ease the blockade on the Gaza Strip.”

Moussa clarified that the virtual span of these understandings is set by the field situation. He said, “If Israel reneges on its understandings by closing borders or launching a new military aggression on Gaza, the understandings will be null and void.”

Secretary-General of the Palestinian People’s Party Bassam al-Salhi called on Hamas to stand behind the PA’s stance and end all understandings and agreements reached with Israel.

He told Al-Monitor, “Hamas’ justifications about the need for understandings with Israel to break the siege on the Gaza Strip are useless. The Palestinian struggle against breaking the siege should be based on unity rather than division. I believe Hamas’ understandings with Israel at a time when Abbas ended all agreements with it further deepen the rift between the two sides of the nation [the West Bank and Gaza].”

Wassel Abu Youssef, member of the PLO Executive Committee and secretary-general of the Palestinian Liberation Front, a leftist party, told Al-Monitor, “Hamas’ agreements with Israel were not coordinated with the PLO, which is the sole representatives of Palestinians. It is incomprehensible why Hamas has chosen to proceed while Abbas ended all agreements with Israel.”

He underlined the importance of uniting the Palestinian stance to confront the US peace plan and Israel’s decision to annex wide parts of the West Bank. He added, “Confronting these risks cannot succeed without a united Palestinian strategy. We lack united work.”