Hamas forcibly expels residents from their homes in Rafah

The Hamas authorities in the Gaza Strip began a campaign to expropriate state-owned lands near the Rafah border crossing, as part of a project to expand the crossing, leaving many citizens homeless and jobless. 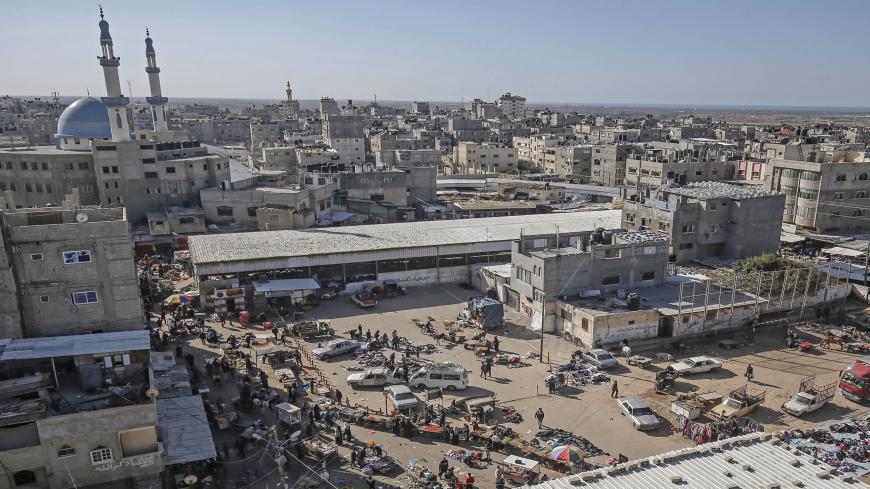 A general view shows a crowded main square in Rafah, one day before a comprehensive lockdown was imposed on weekends in the southern Gaza Strip, as cases of coronavirus infections surged in the Palestinian coastal enclave, Dec. 10, 2020. - Said Khatib/AFP via Getty Images

GAZA CITY, Gaza Strip — Mohammed Abu Shteiwi was woken up on the morning of Jan. 3 by the roar of the bulldozers of the Hamas police force near the city of Rafah in the southern Gaza Strip. The dredging operations are one of the largest that included demolitions and bulldozing of Palestinian homes and farms on an area of ​​55 dunums (13.6 acres) east of Rafah.

The Abu Shteiwi family is one of 23 families that have lived in and cultivated this area of ​​land for decades. They were surprised by these bulldozers coming to put an end to their presence in the area, claiming the lands are government-owned. On Dec. 15, the Palestinian Land Authority affiliated with Hamas in the Gaza Strip issued a decision to expropriate these lands with the aim to expand the Rafah land crossing between the Gaza Strip and Egypt for commercial purposes.

The residents of these lands — men, women, children and the elderly — confronted the Hamas security forces as they started destroying their homes and uprooting their trees. Residents hurled stones at them and their bulldozers. Local sources told Al-Monitor that Hamas’ security forces arrested nine citizens and assaulted dozens of others.

Abu Shteiwi told Al-Monitor, “We have been living on this land and cultivating it for more than 40 years — that is, before Hamas took control of the Gaza Strip in 2007, and even before the founding of Hamas in 1987.”

He added, “We were surprised by what happened. The bulldozers arrived, escorted by dozens of Hamas security forces who asked us to evacuate our homes and leave our farms where we live. They told us that they needed them to expand the Rafah crossing. They turned a deaf ear to our pleas to stop the demolitions. The families who live on these lands have no other shelter.”

On Jan. 4, Abu Shteiwi posted on his Facebook page videos and photos showing his displaced family members entering a tent. He commented, “No person has the right to take away my home, my property, my farms, … under the pretext that the lands are government-owned.”

Mofid al-Arja, head of a family of seven that also was displaced from land in Rafah, told Al-Monitor, “Our only job is cultivating this land and selling its crops in the markets. Now we are homeless and jobless.”

Arja called on Hamas leader in Gaza Yahya Sinwar to provide financial compensation to the affected residents and provide them with housing and jobs.

Maher Abu Sabha, head of the Palestinian Land Authority in the Gaza Strip, told Al-Monitor, “These lands are government-owned and their residents do not hold title deeds proving their ownership. We allowed them to live on these lands and cultivate them but this does not mean they have acquired them. These lands are being expropriated for a public benefit, which is the expansion of the Rafah land crossing.”

Ashraf al-Shaer, one of the notables and elders of the Rafah tribes, told Al-Monitor, “Hamas’ allegations that these lands are government-owned are not true. They are registered at the real-estate property department of the municipality of Rafah as nongovernment lands. All the houses built on them are licensed by the municipality and receive all municipal services.”

Meanwhile, Mayor of Rafah Anwar al-Shaer issued a statement on his Facebook page Jan. 4, denouncing the expropriation of these lands by a decision of the Hamas-affiliated Palestinian Land Authority and its enforcement by its police.

In his statement, Shaer said, “The Land Authority has confiscated an area of ​​55 dunums of citizens' lands in al-Salam neighborhood, east of Rafah, for the purpose of expanding the Rafah commercial crossing based on a government decision to expropriate these lands.”

He explained that this procedure and its subsequent execution were planned without referring to the relevant authorities, namely the Rafah municipality, and the owners of these lands.

In an interview with Al-Monitor, Shaer said, “Government authorities must reconsider the decision to expropriate these lands given its disastrous repercussions on their inhabitants, who are left without jobs or shelter. These lands have been exploited for decades for agricultural and residential purposes and it is illogical to expropriate them simply because their residents do not have a title deed.”

He explained that more than 90% of the lands of Rafah are inhabited by more than 155,000 citizens today who do not have a title deed. Should the government expropriate these lands, most of the city's residents would be displaced from their homes, he warned.

The Hamas security forces’ actions in Rafah were met with widespread anger from citizens on social media.

Journalist Tamer Qeshta wrote on Facebook Jan. 5, “The [denouncing] position of the Rafah municipality regarding the project to expand the crossing, the expropriation of lands and the demolition of homes and greenhouses proves beyond any doubt that the ruling authority is a totalitarian authority and is continuously working to control all aspects of life as much as possible.”

In his comment on the statement of the Rafah municipality, lawyer Hamdan Abu Omran urged the affected people to file lawsuits for redress and compensation for the homes and farms that were destroyed.

Activists launched a Facebook page Jan. 4 in support of those whose lands were confiscated west of the Rafah border crossing. The page documents demolitions, the uprooting of trees and displacement of residents, and calls for returning these lands to their owners.