As the Trump administration tries to link the coronavirus to a Chinese laboratory, Beijing is using the pandemic to strengthen ties in the Gulf. 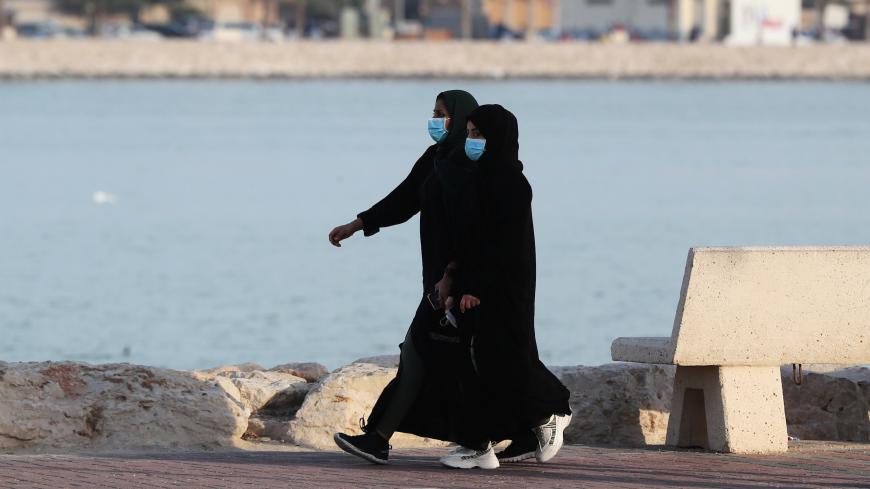 Women wear protective face masks as they walk together after Saudi Arabia imposed a temporary lockdown on the province of Qatif following the spread of the coronavirus, in Qatif, Saudi Arabia, March 10, 2020. - REUTERS

Having seemingly contained the novel coronavirus within China, Beijing has now switched its focus to aid efforts globally on a fast-track basis — including providing masks, test kits, diagnostic and medical technology, other equipment and training facilities to many countries in the Middle East affected by the pandemic.

Some Middle Eastern countries look to follow what they perceive as successful Chinese strategies in dealing with COVID-19. China has gained a reputation for having dealt relatively effectively with the virus, and thus the popular perception in parts of the Mideast is that China can help end the pandemic quickly.

After having opted for stringent steps such as China's, the leading Gulf Cooperation Council states are looking for quick results that could enable them to reopen their economies as soon as possible.

This comes as tensions over the pandemic escalate between Washington and Beijing, with Secretary of State Mike Pompeo saying May 3 that "there is a significant amount of evidence that this came from that laboratory in Wuhan."

An important deal to combat the coronavirus was clinched April 26 between Beijing and Saudi Arabia, whereby Riyadh is paying around $265 million for coronavirus test kits and medical expertise. Having relaxed curfew rules in some parts of the country, Saudi Arabia wants to reopen the holy cities of Mecca and Medina and needs a specialized health infrastructure in place to provide the best facilities.

Under the deal, Beijing will provide the kingdom with 9 million test kits — for a daily testing capacity of 50,000 people — while also sending 500 medical experts to assist in the response and in managing six laboratories, including one portable lab.

Prominent Saudi journalists such as Salman al-Dosary had been lauding China’s response to the virus in domestic media even before this latest deal materialized, with Dosary praising China’s success in enforcing strict quarantine measures to “lay siege to the disease.”

Adopting the lockdown method in dealing with the outbreak, Saudi Arabia and the United Arab Emirates took strict decisive action that may not be possible to implement in many  other regional countries. It has been effective in both states, and UAE Foreign Minister Abdullah bin Zayed said China was “the best example for how these trying times will pass by, through collaboration and solidarity between all leaders, governments and people of the world.”

Undoubtedly, this COVID-19 diplomacy by China has increased its influence and had a wide-ranging impact on the Middle East. Mainly, the aid efforts have resulted in the following advantages for China:

First, it has increased Chinese soft power. Even though Beijing had close ties with the Arab states, the main thing it lacked was soft power and assisting with this health emergency has helped in removing this hurdle. Alongside this pandemic-related aid push, Chinese envoys in the Mideast have been more sociable in recent months, and this made a difference in this regard as well.

In Saudi Arabia, Beijing’s Ambassador Chen Weiqing proactively helped increase awareness among the public by participating in Arabic television programs to explain China’s COVID-19 response. Increasing the friendly ties between both countries. He has also been promoting Saudi-Chinese solidarity on Twitter.

Second, through these efforts China has mostly put an end to the criticism it faced initially for showing a slow response to the epidemic. In fact, Beijing has created quite a following for itself as China’s anti-epidemic methods are being followed across the region.

In March, a video conference was arranged for Chinese and Arab medical experts by the Arab League, and according to their assistant secretary-general, Haifa Abu-Ghazaleh, the extensive discussion helped Arab countries define their road map for fighting the coronavirus.

Consequently, China appears to have won over public opinion. For example, the Saudi television network Al Arabiya said last month, “China is the only country that has performed well in dealing with this crisis.”

Third, by the time the COVID-19 crisis ends, the Gulf economies will need a lot of foreign investment to recover from the financial setbacks caused by the pandemic. It is not just the declining demand for oil and gas; many other economic sectors in the Gulf are also fighting for survival and China could provide financing and expertise. Thus, this region may remain closely engaged with Beijing for the foreseeable future.

Finally, these aid links have helped China forge ties with more Middle Eastern states. China had close commercial ties with energy suppliers such as Saudi Arabia, Iran, the UAE, Oman and Qatar, but it had less access to the rest of the region. As these states sent medical supplies and aid to China when it was in a health crisis, Beijing reciprocated but on a much larger scale as it included more countries such as Egypt, Lebanon and Tunisia.

Offering timely assistance, China made itself indispensable even for those states with which it did not have close bilateral terms. Extending its influence in this region is in line with China’s long-term interests, as most of it is part of its signature project, the Belt and Road Initiative.

However, Beijing’s focus has been on trade connectivity and economic ties; as it has never taken interest in any security role or in solving the rivalries and complexities of the Middle East, its sphere of influence has remained limited. Therefore, the overall benefits from this COVID-19 diplomacy may depend on how long the pandemic lasts.

China has scored diplomatic points because of an absence of large-scale aid efforts from traditional donors in the West, as those countries were preoccupied with their own COVID-19 crises. If these countries also pitch in to help in a big way, China likely will not remain by itself in the limelight.

Also, having been the first country to be hit by the virus, China had contained the outbreak by the time it had started spreading locally in many other places around the world. After having shut down specialized hospitals for coronavirus patients in Wuhan, Beijing started offering professional expertise and advice instead to other countries falling victim to COVID-19.

Thus Beijing is well positioned to export and donate supplies right now, but chances of a second wave of infection remain. If the virus reemerges in China, Beijing may not be able to spare the time and resources to help close allies, and its soft power could suffer as a result.