With Blue and White splitting and the Labor party declining, there is an opening for a new political alignment on the social-liberal side of the Israeli political map. 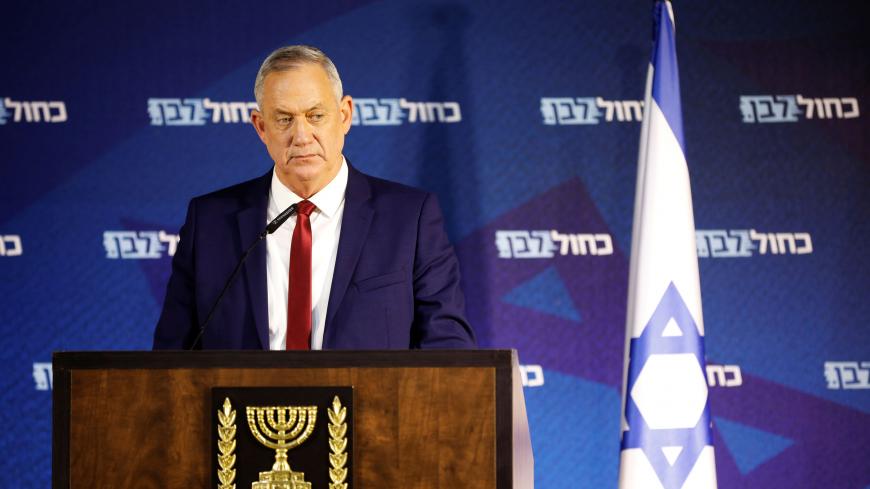 Benny Gantz, the head of the Blue and White party, gives a statement to the media in Ramat Gan, Israel, March 1, 2020. - REUTERS/Nir Elias

The dissolution of the Blue and White Party in Israel was expected because of its very fragile common denominator, but even those who were skeptical about its political life expectancy were astonished that it happened so quickly.

Collecting and associating some people from the right and other people from the left doesn't mold a centrist party together, especially if its only aim is to replace the prime minister and does not have a clue about handling the many other issues on the public agenda.

Once Blue and White leader Benny Gantz breached his main promise to his voters that he would not sit in a government headed by Benjamin Netanyahu, it became impossible for him to keep his party together. Thus the party split into three Knesset fractions.

The collapse of Blue and White and the demise of the Labor Party in recent public opinion polls (today, it has only three Knesset members, two of whom have agreed to serve under Netanyahu while the third preferred to remain in the opposition) leaves a vacuum. It offers political space for the establishment of a new party with a much longer life span than other parties before it.

The voters are out there. While the Zionist center-right consists of about 40% of the voting public and cannot win elections without non-Zionist ultra-Orthodox support, the center-left consists of about 40% of voters and cannot win elections without the support of the non- or anti-Zionist Arab List. Election results and the sizes of the blocs have varied little in recent years. In the past four decades, the number of swing votes was traditionally small — few voters switch alliances from one bloc to the other. This means that victory or defeat hangs on a party’s ability to attract first-time voters and to reignite the enthusiasm of veteran supporters. New parties on both sides of the political spectrum have proved themselves quite efficient in fulfilling these functions, and even in moving small numbers of voters from one bloc to another. Most of these parties, however, have suffered from short life spans due to a lack of sustainability.

Some 2,000 people went out into the streets of Tel Aviv on April 16 to protest what they describe as the erosion of Israeli democracy under Netanyahu’s leadership. Lacking true leadership to face the coronavirus crisis and also lacking a strong alternative, Israelis have been left with few political options. This means that there is an urgent need now to build a new political entity on the rubble of Blue and White and Labor that can be a home for liberals, reformists, secular people and religious voters who support a separation between the state and religion, pragmatic citizens who are worried about the development of a one-state reality where a minority of Jews rule over a majority of non-Jews and for many other people who cannot accept the social gap between various groups in Israeli society.

If such a new party is not created, votes might shift from left to right — but not necessarily. We could also witness a situation where many center-left voters simply choose to remain at home on election day. This would certainly offer the right a clear-cut victory.

Whatever happens in the coming days, it seems that Gantz (especially after his surrender on the issue of the Jordan Valley annexation) will not be perceived as a leader of the liberal side of the spectrum. Given his failed leadership, the liberal camp needs an alternative.

Gantz revealed his true colors from the beginning in various ways. These range from the name of his party — Blue and White — which refers to the colors of the Israeli flag, to the party's slogan ("Israel first") all the way to the repulsive promise (breached later on) not to consider the Arab Joint List's support even as a part of his bloc to block Netanyahu. Clearly, someone who thinks like that, or says such things only because he believes it is popular to say so, cannot be a leader of a liberal bloc.The most important aim of the a new liberal leadership must be returning to the negotiating table with the PLO on the basis of previous agreements and plans, with the aim of preserving Israel as a Jewish and democratic country living side by side with a Palestinian independent and non-militarized state. This can be achieved directly or under an umbrella of a Palestinian-Israeli confederation.

The second aim — especially considering the phenomenon of the coronavirus — should be guaranteeing a sound and reliable social safety net that would allow the lower middle class and weak strata of Israel's society to meet the challenges of crises. Universal social services in fields such as health, education and social allowances should be rendered to the citizens and financed by the taxpayers. The government should be bigger not in the number of its ministers but in the scope of its services.

This new political entity should fight for the independence of the courts, and against any attempts to limit their authority using the false argument that judges are not elected while politicians are. There should be a very clear commitment to enact laws that will enshrine the powers of the "gatekeepers."

Israel is the only democracy in the world in which religious matrimonial laws constitute the state’s recognized matrimonial laws (for Jews, Muslims, Christians and Druze). There is no justification for the continuation of this shameful reality, and the new party should hoist this flag of civil marriages as one of its most important commitments.

Securing human rights and promoting them should be encouraged and monitored by a government special authority, headed by a commissioner for human rights. Israel committed itself more than 20 years ago to establish such a body, but never fulfilled that promise. It is of utmost importance for Israel's liberal leaders to promise to establish such an authority in the near future amid the controversies surrounding various human rights in Israel.

The negative precedents of having political leaders who came from the army or from other important fields of life and who have found themselves all of a sudden as the head of a party or even as head of state should teach us a lesson about the inherent dangers involved in an unnatural leadership pushed forward. On the other hand, there are people in the political arena who can lead the new party. One of them is retired Maj. Gen. Yair Golan, a former deputy chief of staff in the Israel Defense Forces who is employing his time as a Knesset member to thoroughly study politics and its challenges. Another excellent candidate would be former Foreign Minister Tzipi Livni, the former leader of Kadima and then Hatnua who is now out of politics; the political arena misses her.