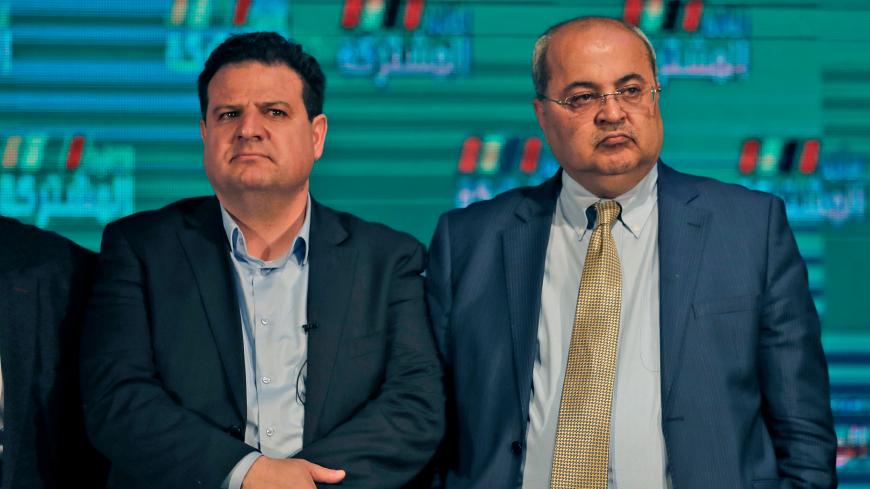 Ayman Odeh (L), leader of the Hadash Party that is part of the Joint List alliance, stands next to Ahmed Tibi of the Arab Movement for Change as they and other alliance leaders address supporters at their electoral headquarters, Shefa-Amr, Israel, March 2, 2020. - AHMAD GHARABLI/AFP via Getty Images

“These are not ordinary days and they require extraordinary decisions. Thus, as I have said, I intend to examine the formation of a national emergency government,” declared Blue and White leader Benny Gantz March 26 upon his election as speaker of the Knesset, with the support of the right/ultra-Orthodox bloc.

The move led to the breakup of Blue and White and paved the way for Gantz and his party, Hosen L’Israel or Israel Resilience, into a government headed by Prime Minister Benjamin Netanyahu. Who remembers now that on the day after the general election Gantz declared, “I won’t serve in a government led by a man under indictment?”

We must admit the truth that Netanyahu has proven that thanks to the global coronavirus crisis, politically, the number 58 is somehow greater than 62. Netanyahu has succeeded in forming a government with himself at the top without 61 mandates for the right/ultra-Orthodox bloc, mostly because he has managed to identify the weak links in the center-left-Arab bloc: Knesset members Orly Levy-Abekasis, Yoaz Handel and Zvi Hauzer.

The news of the Blue and White split and Gantz joining Netanyahu’s government shocked the Arab public and members of the Joint List. After all, the Joint List achieved a record voter turnout, winning 15 seats in the last election; it enjoyed an impressive voting rate among the Arab public, its highest in the past two decades at 64.8%. The Arab public hung great hopes on Gantz and on the opportunity to form a center-left government that would send Netanyahu home. Thus, the Joint List unanimously recommended to President Reuven Rivlin that Gantz be charged with forming a government.

Gantz’ decision to join the next Netanyahu government greatly disappointed the Arab community, where people once again argue that Israeli politics is Jewish politics, as if there were no Arabs in the country and no significance to the number of mandates gained by the Joint List.

“There’s no doubt that Gantz’ joining the Likud government caused great disappointment among the Arab public,” explained author and publisher Odeh Bisharat in conversation with Al-Monitor. “The voting rate in the Arab community rose because [voters] believed they have an opportunity to impact the political map in Israel. Gantz’ move is tough blow to their hopes.”

It’s too early to know how Gantz’ decision will influence the political picture in the Arab community, but it seems that he greatly damaged the will of many Arab citizens to be a part of Israeli society and participate in the political game. “Gantz’ move only strengthens the growing consensus among Arab citizens in Israel that every vote for the Zionist parties on the center-left is a potential vote for the formation of a right-wing government,” explained journalist Mohammad Magadli in conversation with Al-Monitor. “Gantz also proves that the vote of Arab citizens for Arab representatives keeps their vote in the right camp: the camp opposing the Likud and Benjamin Netanyahu.”

On the other hand, journalist Wadea Awawdy clarified, “This is a big challenge for the Joint List in light of the failure of its campaign that claimed it has the power to send Netanyahu home and that there’s a difference between Blue and White and the Likud. In the end, it turned out that they are all the same. There’s no doubt that some people and streams among the Arab public will use this opportunity to attack the Joint List and to argue that there’s no place for the Arab public in the political game in the Knesset, and thus we have to recalculate the route.”

Here lies the great challenge for anyone who seeks to court the Arab vote in the future: how to convince the Arab public that its voice is meaningful and that it is part of the political game, even though since the second Yitzhak Rabin government Arab parties have not been an influential factor in shaping the leadership in Israel. For this to be achieved, two things must happen.

The first is that the Joint List should conduct itself with full transparency and stop functioning as an exclusive club of four parties. The Arab public should be allowed to influence the composition of the Joint List, including the inclusion of new names, even those serving Knesset members find threatening. After all, in a political world without Netanyahu the Joint List will have few tools to get out the Arab vote.

The second is the integration of Arab candidates in Jewish parties. The center-left should learn that Arab citizens and candidates are its only chance to create a revolution and to gain control of the government, just as Likud Prime Minister Menachem Begin identified the potential in Jews from Arab lands and established an alliance with them.

“Since the Joint List finds it difficult to draw media attention to issues that aren’t foreign affairs, in my opinion, it’s important that its members cooperate with opposition parties on domestic issues. Increasing exposure on these issues will gain points for them among their voters,” explained attorney Amjad Shoufany from Ilabun in a conversation with Al-Monitor.

There is another person who has benefitted from the breakup of Blue and White: Yair Lapid. After eight years in the political field, Lapid has finally succeeded in establishing himself as an alternative to the Likud and Netanyahu, thanks to Gantz’ move. Lapid tried every way to get to the top such as shaking off Arabs, excluding Arabs from his party, disguising himself as right-winger and joining the Blue and White platform, but none of it worked. His maintained his spine and did not join Netanyahu’s government, in contrast to his former ally.