Israeli-Bedouin students left behind over coronavirus

Israeli high schools and colleges offer online courses for students who are confined due to the coronavirus, but these initiatives are worthless for the Bedouin pupils who have little access to computers or fast internet in their villages. 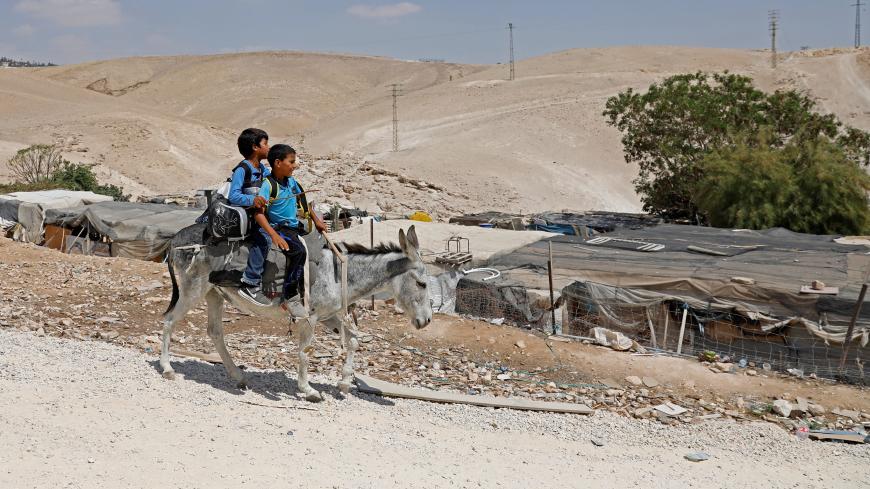 Palestinian Bedouin pupils ride a donkey on their way to school in the village of Khan al-Ahmar in the Israeli-occupied West Bank, Sept. 6, 2018. - AHMAD GHARABLI/AFP via Getty Images

The coronavirus pandemic is hurting everyone in Israel — rich and poor, Jews and Arabs — but poorer communities face much greater difficulties in dealing with its ramifications, including in education. When the whole education system in Israel — from preschool to high school to higher education — moved to remote learning by means of the internet, the gap between rich and poor grew wider because of the latter's lack of access to technology. This phenomenon is especially notable among the Arab Bedouin population in Israel.

Most of the Bedouin, about 250,000 (2017 figure), live in the south of the country. A fifth of them live in unrecognized villages without infrastructure. They are the poorest group in Israeli society, and as a result, their educational achievement is especially low. According to data of the Council of Higher Education published in February 2019, relating to the academic year that started in 2017, the rate of Bedouins who started studying for a bachelor’s degree was only 14%, compared to 46% of Jews. The rate of Bedouin students among Arab students was only 28% that year. While this is a large increase compared to the previous decade, this rate is still exceptionally low. According to Knesset data, the rate of matriculation among Bedouin students is 32% compared to 68% among the general population (excluding Bedouins and ultra-Orthodox Jews).

In recent years, there has been an increase in the number of Bedouin students who receive a full matriculation certificate, as well as in the number of Bedouin students in higher education. But they still lag behind the entire population. One of the main problems of the education system in the Israeli-Bedouin society is the lack of infrastructure in general and the lack of technology in particular. The internet network is old and thus very slow in many of the more distant villages and especially in those that are unrecognized. The internet is supplied only via cellular networks, and there are hardly any PCs and laptops in residents’ homes.

According to data by the nongovernmental organization Abraham Initiative, there are about 102,000 school-age children in the Negev. Of those, 36,000 live in unrecognized villages or in the villages of the Neve Midbar or Al-Kasum regional councils, which lack internet networks or other infrastructure. Twenty-thousand students live in neighboring towns, also with no infrastructure. Thirty-thousand pupils live in neighborhoods with infrastructure but are part of families with at least eight children and only one computer at home. From this, we learn that half of the Negev’s Bedouin students do not have access to an internet network.

On March 12, it was decided to fully suspend the education system for at least five weeks, until after the Passover break, over the coronavirus crisis. Schools and academic institutions moved to online learning, relying on programs and applications like Zoom. These programs, which integrate video and educational materials sent online, require strong and reliable internet connections — exactly what is lacking in the Bedouin villages in the Negev. As a result, most Bedouin pupils are practically cut off from their schools while their peers throughout the country continue to learn. The Abraham Initiative told Al-Monitor that because of the coronavirus crisis, the Ministry of Education opened a comprehensive educational portal for students in the Hebrew language but made far less material available in Arabic.

Attempts have been made in higher education to deal with this problem. Marah Agbaria, who is in charge of Arab students at the Student Union of Ben-Gurion University of the Negev, tells Al-Monitor that the university prepared special computer rooms for Bedouin students so that they could participate in classes. But then restrictions on movement began because of the coronavirus, and these students had to stay home. According to Agbaria, the union got cellular modems for some of them that enable distance learning, but the number is not enough. And there is no solution for students who do not have computers.

Hundreds of Bedouin students also study at Sapir College in the Negev. Regarding distance learning, Haytham al-Nabari — a social work student who lives in Tel Arad — told Sapir student website Spirala correspondent Hasin Aldada, “It requires fast internet, and we don’t have internet infrastructure like in other places. If I go to an online class with a teacher, I do it through the phone. But the internet is weak or doesn’t work.”

Rafif Abu Hajaj, a public policy administration student who lives in the village of Al-Furah, told Spirala that “homes in the Bedouin villages rely on solar energy, which depends on the sun. But since the weather in recent days has been chilly and rainy and there wasn’t much sun, we didn’t have electricity for several days.”

The Mossawa Center (the Advocacy Center for Arab Citizens in Israel) has raised the issue of cellular overload in a letter to Minister of Communications David Amsalem. According to a January 2018 report by Asmaa Genaim from the Israel Internet Association, about 90% of Arab citizens in the country use the internet through their cellphones. Now, when most citizens in the country are staying in their homes, there’s greater internet use, which overburdens networks that are already weak in Arab towns and villages. In the letter, the center asked that the Ministry of Communications act immediately to strengthen and broaden the internet and cellular networks in the Arab villages and especially the unrecognized villages in the Negev by requiring media, cellular and internet providers to increase their networks in these locations.

Adalah, the Legal Center for the Rights of the Arab Minority in Israel, announced March 12 that it will submit a petition to the Supreme Court along with the Follow-Up Committee on Arab Education and other organizations to ask that internet services and distance learning be made available to Bedouin villages in the Negev. In the announcement, shortly before the petition was submitted, the group wrote, “The difficult situation now exposed in this emergency situation is a result of the state’s systemic negligence of the essential needs of unrecognized villages in regular times. In the realm of education, discrimination is expressed in the low achievements of students, as arises from the stark data that are well known to decision-makers. Despite our requests, we have not received any sign that the authorities are doing anything in order to find solutions to replace the closed education system, which is supposed to serve children in these villages, and it seems that the state is simply leaving them behind. Thus, we must turn to the courts.”

The government offices charged with these issues have responded slowly to these requests. The Ministry of Education has increased the amount of digital educational material in Arabic but has not found an immediate solution to the problem of students in the Negev. The Ministry of Communications has said that the problem of infrastructure cannot be solved in the short term.

The bottom line: About 100,000 Bedouin school-age students and about 2,000 Bedouin college students from the Negev will likely lose half a school year, and the gap between them and other Israeli students will only grow.

Proper disclosure: The writer is a lecturer at Sapir College, which is mentioned in the article.