Back to the future on US-Iraq strategic dialogue

The announcement of US-Iraq talks in June is considered by many Iraqis and observers as overdue, and comes as there appears to be backing for continuing the partnership, under adjusted terms. 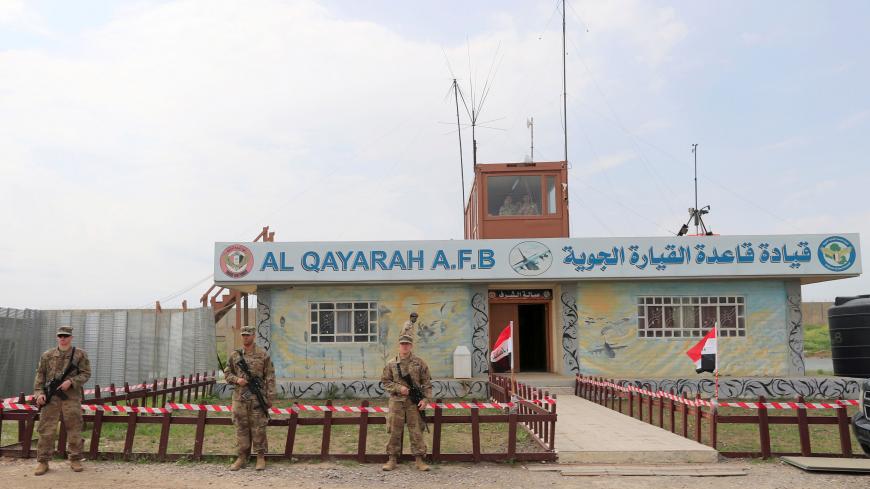 US soldiers stand guard during the hand over of Qayyarah Airfield West to Iraqi Security Forces, south of Mosul, Iraq, March 26, 2020. - REUTERS/Thaier Al-Sudani

It looks like Baghdad and Washington will try once again to settle their differences over the presence of US troops in Iraq. Both sides have agreed to resume talks in June to reframe their relationship.

“The resumption of the strategic dialogue with the US is an important matter that the new government will undertake,” Iraqi President Barham Salih told CNN on April 15. The new government he referred to is that of Prime Minister-designate Mustafa al-Kadhimi, director of Iraq's National Intelligence Service, who is expected to submit his Cabinet nominations for approval this week.

Salih said that “US-Iraqi relations need to be put in the right context.” His statement coincided with Kadhimi revealing April 15 his country's “readiness for a serious dialogue with the US on the nature of its presence in Iraq.”

Those remarks seem in line with those of US Secretary of State Mike Pompeo, who said during an April 7 news conference, "All strategic issues between our two countries will be on the agenda, including the future presence of the United States forces in that country, and how best to support an independent and sovereign Iraq."

In an April 12 article, Washington Institute senior fellow Michael Knights wrote that resetting ties under the 2008 Strategic Framework Agreement (SFA) is “long overdue.” He added, “When US and Iraqi leaders gather under the rubric of the SFA later this year, their first priority should be an honest airing of grievances. This should then give way to recognition of mutual interests.”

Speaking to Al-Monitor, Ihsan al-Shammari, head of the Iraqi Center for Political Thought, said, "The US request to discuss the future of the US-Iraqi relations is not something new. There were bilateral talks under Haider al-Abadi [who was prime minister from 2014 to 2018], and there was high-level understanding to the point that the US was convinced of the advantages of withdrawing its troops. Indeed, Washington scaled down its troops from 11,000 to 5,500.”

He noted that this positive understanding deviated after Adel Abdul Mahdi assumed the premiership in 2018, and particularly when the United States assassinated Iran's Quds Force commander and the head of Iraq's Popular Mobilization Units in Baghdad in January.

Shammari anticipates that the two sides will now “readjust the strategic framework agreement to their updated relations at all levels, and there will not be an end of US military presence as much as a redrafting of the agreement’s annexes.” He added, "The Iraqi government will be keen on a common cooperation field, and will not ask for the US troops to fully withdraw, so as to maintain balanced relations between the two countries. That is unlike the Abdul Mahdi government, which, in Washington’s eyes, was behind the deteriorating relations as it failed to protect the missions and troops that are present in Iraq.”

Shammari continued, "There is a chance for new strategic understandings in mid-June, as a new government with a different vision is being formed. … Iraq, which is governed by many equations, is going for permanent and strategic relations with Washington, as a powerful ally against the challenges terrorism causes.”

Baghdad and Washington are worried about a possible revival of Islamic State (IS) forces in Iraq, and the United States also wants to maintain a presence there as its tensions build with neighboring Iran.

Parliamentarian Abdul Hadi al-Saadawi spoke to Al-Monitor about “practical steps regarding the future of the US presence in Iraq." Those steps will include setting up a security committee that will revisit the SFA after the new government is formed, and amend its security provisions. "Thus, it will be deciding on whether the US troops will stay or withdraw," Saadawi added.

"Parliament perceives the multiple military bases [that host US forces] and huge number of US troops to be illegal, which is embarrassing for the US side. … Kadhimi, as an intelligence man with a good security team, is capable of negotiating the US presence with Washington and renewing the competences of the remaining troops in Iraq.”

Abbas Abboud, former editor-in-chief of Iraqi newspaper al-Sabah, told Al-Monitor that Iraq has only made minor gains under the SFA, yet sustained major losses. "This is while Iran managed to fill the US vacuum in Iraq,” he said.

Abboud also said, "The local equation favors the US military presence in Iraq. … The Sunnis welcome the presence of US troops, which ensures them greater interests and rids them of the Shiite domination they fear. Also, the Kurds are not [averse] to the US and welcomes [its presence], which gives them the strength to influence Baghdad.”

The Shiite political forces are required to listen to the public. That is true particularly since, in addition to the Sunnis and Kurds, there are many Shiites who believe it's important not to risk Iraqi security and economic conditions to serve Iran's agenda, and that Iraqi security forces still need US support.