Tension between Tehran and Washington has some Iraqis worried about foreign troops withdrawing from Iraq, although the United States had said it has no intention of leaving the country in Iranian hands. 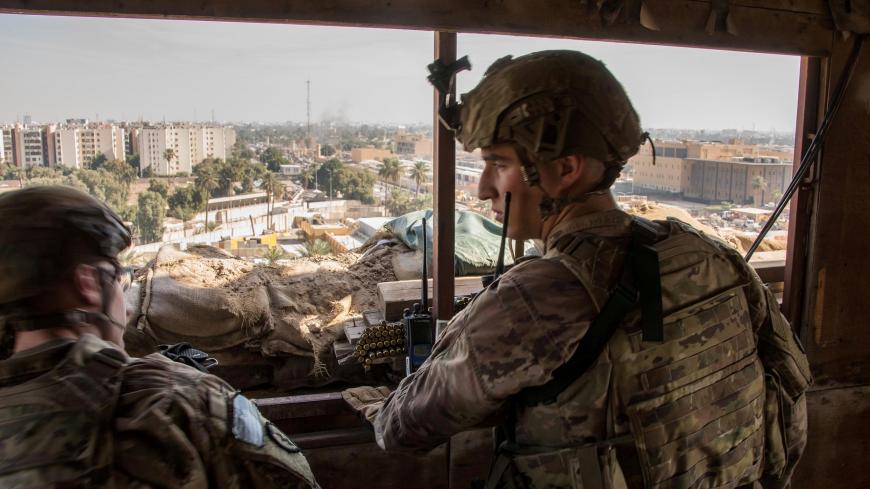 For the security of its personnel, NATO has temporarily suspended its training activities in Iraq, given the recent violence there. Iraqis seem divided over what that will mean for their safety.

The United States on Jan. 3 assassinated Iranian Quds Force commander Qasem Soleimani and the deputy head of Iraq's Popular Mobilization Units, Abu Mahdi al-Muhandis, in a drone attack near the Baghdad airport. Iran retaliated by firing missiles at military bases in Iraq where US troops are stationed. There are also mass protests taking place in Iran and Iraq.

The NATO announcement raised concerns among some Iraqis that the United States and its allies would withdraw from Iraq, which would allow Iran to increase its influence. On the other hand, Iraq's parliament voted Jan. 5 to end the foreign military presence in Iraq.

Some NATO troops are being relocated within Iraq, and some to other countries. However, NATO Secretary-General Jens Stoltenberg said training of Iraqi security forces will resume when the situation is deemed safe enough.

Also, US Defense Secretary Mark Esper announced Jan. 6 that the Pentagon has no plans to leave Iraq, and US Secretary of State Mike Pompeo said the United States is not willing to bow to Iraqi demands to withdraw its troops. The United States instead is only willing to discuss force reconfiguration with the Iraqis, and a greater contribution by NATO forces.

Addressing the potential significance of a NATO withdrawal, Iraqi military expert Fadel Abu Raghif told Al-Monitor that NATO's move “is not of paramount importance because NATO’s role in Iraq has become modest, even as far as training is concerned." He said, "There are common tasks in exchanging information between NATO and the Iraqi authorities, but the alliance benefits the most from the information provided by the Iraqi intelligence services on terrorists.”

Asked about Iraq’s weapons supply, Raghif said, “Iraq can diversify its sources away from NATO. Iraq actually acquired Russian Mi-25 and Mi-28 helicopters after the US refused to equip it with Apache aircraft, and found an alternative to the US Viper system F-16s, which NATO refused to provide.”

Asked whether it would be possible to dispense with the training provided by NATO, Maj. Gen. Abdul Karim Khalaf — spokesman for Iraq's commander in chief, caretaker Prime Minister Adel Abdul Mahdi — told Al-Monitor, “The work of the international alliance forces will be limited to advice, armament and training, while the armed forces will withdraw from Iraq.”

Hisham al-Hashemi, a researcher at al-Nahrain Center for Strategic Studies, spoke with Al-Monitor about “the importance of NATO forces staying in Iraq for both Iraq and the US,” and said, “Washington is counting on this presence to block the land route from Tehran to Beirut. Also, if US forces and their allies in NATO and the West stay in Iraq, they would be helping in harnessing terrorist groups in both Iraq and neighboring countries.”

At the political level, Hashemi said, NATO “imposes the authority of the US axis on the tools of power in Iraq.” He added, “Iraqi interests are linked to the NATO influence and its securing of economic aid as well as weapons to the army.”

Ahmed al-Sharifi, a military analyst and former member of the United Iraqi Alliance, said security arrangements with the United States "have nothing to do with NATO decisions.”

“Even if Iraq officially decides to expel all forces, including NATO, from Iraq, the Iraqi decision would not be binding because NATO troops were deployed based on an international decision that was made after Iraq was found to be a threat to peace and security due to continued Islamic State activity,” he told Al-Monitor.

Current developments show that Shiite political parties known for their pro-Iranian stances are pushing for the withdrawal of foreign forces from Iraq, including those of NATO.

Parliament member Hussein al-Aqabi told Al-Monitor, "Security forces have acquired the power and tools to respond to foreign threats and enhance internal security. This means that no foreign forces are needed inside the country.”

Fatah Alliance leader Hadi al-Amiri agreed with that assessment, announcing Jan. 6, "The armed forces are capable of maintaining the security of the country following the withdrawal of foreign forces.”

Yet if NATO forces withdraw from Iraq, the country will face its toughest political and security conditions since 2003, when the US invaded. This is especially true as US President Donald Trump threatened to impose tougher sanctions on Iraq than those imposed on Iran. If that happens, Baghdad might need to turn to Tehran, with the support of Iraq's pro-Iran political forces.

The assassinations of Muhandis and Soleimani will continue to have repercussions for Iraq’s relations not only with the United States, but with others in the West as well.

On Jan. 5, the German army suspended operations aimed at replacing soldiers participating in the global coalition against the Islamic State in Iraq. On Jan. 6, Britain announced it was reducing the number of employees in its embassies in Iran and Iraq. Meanwhile, the leaders of France, Germany and the UK condemned “the [Iranian] attacks that targeted the foreign forces in Iraq" after the assassinations. This leaves Iraq to deal, once again, with the specter of violence and issues of safety.