Armed militias in Iraq will have to determine whether their loyalties lie with their neutral government or against the United States in a standoff with Iran. 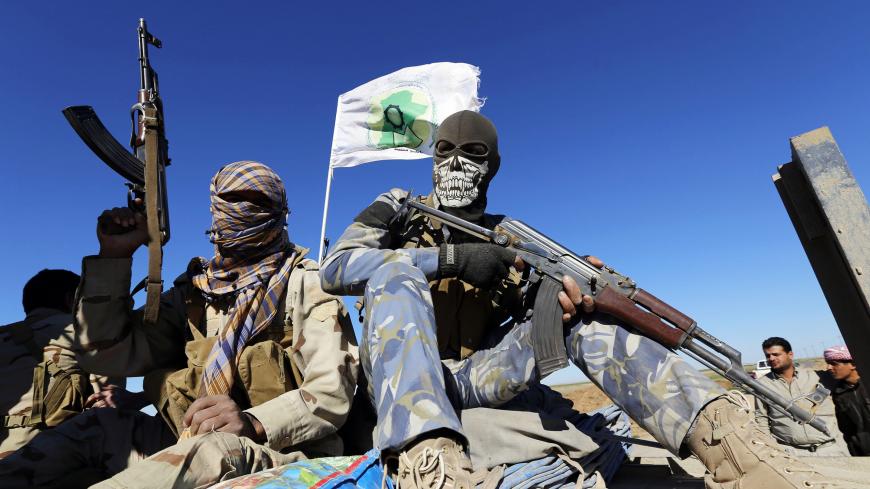 BAGHDAD — It's hard to tell what's really on the minds of Iranian and US officials in the flurry of words they've exchanged this week, but Baghdad has been perfectly clear about any potential confrontation between the two: not in my backyard.

Amid prolonged dares and double-dares between Tehran and Washington — punctuated with claims from both sides that they don't want a war — Iraq has made it known it won't become a proxy battleground.

The issue becomes a bit murky, however, when factoring in Iraq's pro-Iranian armed military factions.

For example, Harakat Hezbollah al-Nujaba, a radical Shiite militia in Iraq, has long been demanding that US troops leave Iraq. The pro-Iran group, an affiliate of Iraq's Popular Mobilization Units (PMU), defines itself as “a faction of the Islamic resistance in Iraq, which aims to defend the homeland and sanctities in both Syria and Iraq.” Nujaba has been working with the Iranian military's elite Islamic Revolutionary Guard Corps for a long time. United States recently declared the IRGC a terrorist organization.

On March 7, the US State Department added Nujaba to the US list of global terrorist organizations. Later that month, the US sanctioned Nujaba and its leader, Akram Kaabi.

So perhaps it was no surprise when Nujaba announced May 13 that Iraqi resistance factions are ready to target US interests whenever they deem appropriate. "Confrontation with the United States will only stop once it is eliminated from the region, along with the Zionist entity,” it said, referring to Israel.

In response to these threats and others, the US State Department on May 15 ordered US nationals not working in emergency fields to leave Iraq immediately. Germany and the Netherlands then suspended military training operations in Iraq. The Netherlands has 169 military and civilian personnel in Iraq, and Germany has 160 military personnel there training Iraqi forces.

Yet Naim Aboudi, a parliament member for the Sadikun bloc — the political wing of the PMU-affiliated Iraqi Shia military group Asaib Ahl al-Haq (AAH) — told Al-Monitor, “There are no military preparations against the United States in Iraq.”

Aboudi added, “There is a deliberate attempt to ruin facts and claim the PMU factions are operating outside the state’s control and preparing to attack US institutions in Iraq.”

On the other hand, Hassan Salem, another parliament member representing the Sadikun bloc, told the media May 9, “Washington’s [verbal] attack against Iran is a direct attempt [to inflame] Islamic countries. It's a fact that Islamic movements will stand against the United States by all means."

Political analyst, researcher and secretary of the Iraq Media Observatory Mahmoud al-Hashemi told Al-Monitor, “Positions remain unclear regarding a possible confrontation because Iran doesn't want the factions to take any military action against the United States at this time. Rather, it wants to wait until the situation becomes clearer since Iran believes that, given the long borders between them, Iraq is important when it comes to strategy, trade and security.”

Hashemi added, “Factions in Iraq are also facing a conflict of wills."

The United States has a good relationship with Iraqi Prime Minister Adel Abdul Mahdi and has no interest in provoking the factions, which could weaken his government, Hashemi added.

Nasr al-Shammari, Nujaba's assistant secretary-general, told Al-Monitor, “Nujaba is taking into consideration the Iraqi government's position regarding the US-Iran confrontation.” Another consideration is that the government "needs to repay the Iranian people who made many sacrifices in Iraq’s war against the Islamic State [IS].”

Regarding what position the PMU and its affiliates are likely to take, journalist and activist Walid al-Taei, who has sources close to AAH, told Al-Monitor, “Speculations surround the PMU’s role in any confrontation involving Iran; it is always shown as automatically receiving orders from Iran.” He added, however, “The PMU will take into consideration national interests. Statements are not always in line with field action, which is very thought-through.”

Many Iraqi parties, especially the Shiite ones, call for supporting Iran should it come under US attack. This stance allows them to avoid calling for an actual attack on the US presence in Iraq. There's no mention of what kind of support they are calling for.

Meanwhile, the Islamic Dawa Party-Iraq Organization — part of the United Iraqi Alliance — issued a statement May 15 showing clear political support for Iran, saying, “The US administration beat the drums of war against Iran after it washed its hands of the Iranian nuclear deal."

Member of Iraq parliament's Security and Defense Committee Ammar Tohme told Al-Monitor, “[Such claims] were caused by US fears." He ruled out “the possibility of pro-Iranian factions resorting to military action against US interests because they don't want to put the Iraqi government in a difficult situation between Tehran and Washington.”

Stating a similar conviction, security and political analyst Fadel Abu Raghif told Al-Monitor, “There is little chance for armed factions to attack US forces in Iraq given their involvement in the government institution, and if a party hits the interests of any country within the international coalition, it will be subject to prosecution according to Iraqi law.”

Based on their declared political positions, the PMU and its deputies are all in favor of calling for calm but are also all for supporting Iran if a confrontation does break out. However, no one has particularly stated whether it would be moral or military support against the United States, which has been on good terms with the Iraqi government and helped Iraq defeat IS.