In order to reorganize the relationship between the two countries in various aspects, Iraq and the United States are negotiating over a new strategic agreement. 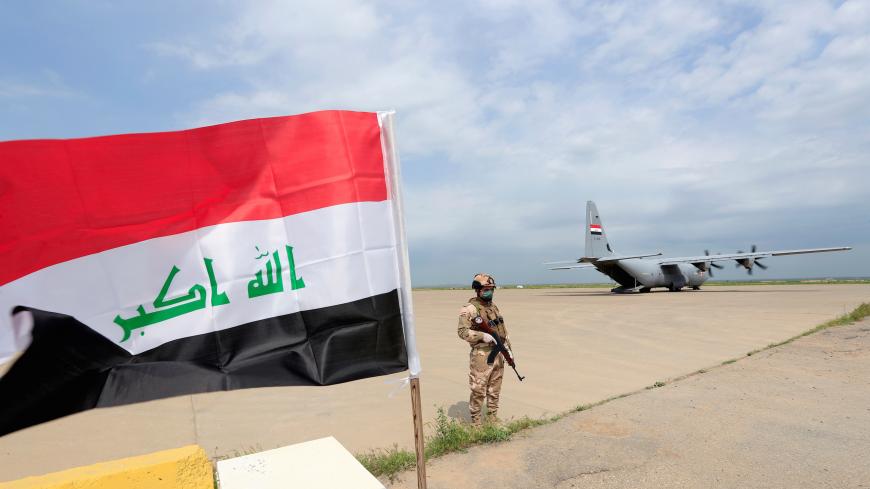 An Iraqi soldier wears a protective face mask and gloves following the outbreak of the coronavirus disease as he stands guard during the handover of Qayyarah Airfield West from US-led coalition forces to Iraqi security forces, in the south of Mosul, Iraq, March 26, 2020. - REUTERS/Thaier Al-Sudani

The United States and Iraq were to begin a "strategic dialogue" June 11, held via video conference due to the COVID-19 pandemic. The dialogue was proposed in April by US Secretary of State Mike Pompeo.

Iraqi security officials said a Katyusha rocket hit the Green Zone the night of June 10, just hours before the talks were to kick off. No casualties were reported.

Although Iraq and the United States previously signed a security agreement that ended the presence of US troops in Iraq by the end of 2011, Iraq requested US military assistance in 2014 when the Islamic State (IS) occupied a third of Iraqi territory. Subsequently, the United States led a coalition in Iraq to help fight IS. After IS' defeat, the United States left about 5,000 troops help Iraq maintain security.

The escalation between the United States and Iraq reached its peak early this year with the US assassination of top Iranian commander Qasem Soleimani, Iran's bombing of US troops at the Ain al-Asad base in Iraq and the vote by Shiite parties in the Iraqi parliament to end the US troop presence in the country. Kurds and Sunnis boycotted the parliamentary session in a sign of objection.

New Iraqi Prime Minister Mustafa al-Kadhimi included the strategic dialogue with the United States as part of his plan of action presented to the parliament. The plan, which was approved by the parliament, does not mention the departure of US troops from the country.

Pompeo said that the US side was to be led by his Undersecretary for Political Affairs David Hale and that “all strategic issues between two countries will be on the agenda, including the future presence of the United States forces in that country, and how best to support an independent and sovereign Iraq.”

The dialogue will not be limited to the US military presence in Iraq and the security cooperation between the two sides, but also will include cooperation in financial, economic, social, political and energy dossiers.

The United States has given Iraq an additional 120-day exemption from US sanctions on importing natural gas and electricity from Iran, while at the same time expecting Iraq to find alternative energy sources. However, Iraq just signed an agreement with Iran to continue importing gas and electricity for the next two years. This could be a big barrier for the reaching of an agreement unless Iraq shows that it has started its search and has a clear timeline and plan.

Other difficult issues will be the subject of ending the presence of US troops and dismantling Iran-backed militias.

Pro-Iran militias in Iraq warned Kadhimi's government that the dialogue must focus only on the departure of US troops from the country and accused the government of making dubious choices in its selection of members for the Iraqi delegation.

On June 10, a few hours before the talks began, the Fatah parliamentary bloc affiliated with the Popular Mobilization Units (PMU) issued a statement about the dialogue.

"Starting from our legitimate and national responsibility, we find it obligatory for us to remind the head and members of the Iraqi negotiating delegation of  the unanimous parliamentary vote that stressed the need for foreign forces to leave Iraq," the statement read, adding that implementation of the parliamentary recommendation is “strategic goal” of the Iraqi people.

The Fatah bloc also recommended that the Iraqi delegation "benefit from the experience of the Iraqi-American negotiations that took place in 2008 and ended with the withdrawal of American forces from Iraq."

On Jun. 8, Abu Ala al-Walai (also known as Hashim Bunyan al-Siraji), commander of Kataib Sayyid al-Shuhada, tweeted, “The primary task of the negotiating team in its current form, which was chosen by the Iraqi government following dubious specifications, is to delay the withdrawal of the American occupier to the end of the year, and this is totally unacceptable.”

Abu Ali al-Askari, a security official for the Iraqi Hezbollah Brigades, tweeted, "We were surprised by the appointment of a group to negotiate with the American enemy where most of them are in line with the American project in the country."

Askari called for replacing some of the members who are “known for their loyalty to the American enemy," calling for "the inclusion of one of the PMU leaders and a tribal figure within the negotiating team."

On the other hand, Ammar Hakim’s al-Hikma movement and former Prime Minister Haider al-Abadi’s Nasr Coalition called for using the dialogue for the interests of Iraq in all aspects.

Hikma reminded the delegation about top Shite cleric Ayatollah Ali Sistani's advice that the decision over ending the presence of US troops in Iraq be left to the next elected government.

Kurds and Sunnis have already expressed their objections to a hasty departure of US troop from Iraq, and have shown interest in further  developing the relationship with the United States in various ways.

Under such circumstances, the strategic dialogue seems to be the beginning of a long-term negotiation that might find a way to end the US troop presence in the country.

This indicates that the strategic dialogue could continue until the end of the year as it tackles problematic issues, including the presence of US troops and the activity of Iran-backed militias in the country.