When Egypt's health minister visited Italy with a shipment of medical supplies, many citizens protested that trade and political ties were not worth the cost. 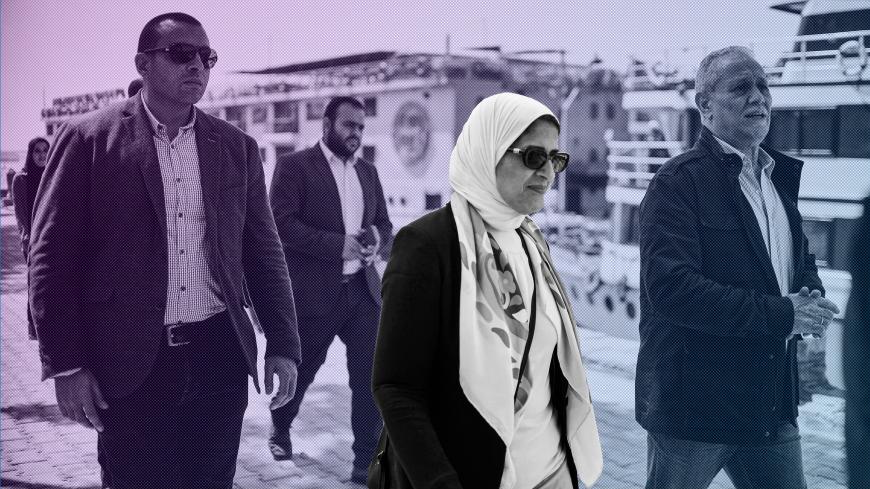 Egyptian Health Minister Hala Zayed sparked controversy on social media and among politicians and analysts after visiting Italy to provide medical aid to the European country amid the novel coronavirus outbreak.

Zayed arrived in Italy April 5 following instructions by President Abdel Fattah al-Sisi, "offering solidarity and support to Italy during this ordeal,” according to a statement released by the Health Ministry. She and a delegation of the Egyptian armed forces brought two military aircraft carrying medical supplies such as protective gloves and disinfection materials.

Zayed's visit was criticized and ridiculed in Egypt and raised questions among political analysts. Social media users criticized the minister for appearing without a face mask, unlike the Italian Foreign Minister Luigi de Maio, who received her wearing one.

Many Egyptians were surprised that Zayed did not wear a mask in violation of the daily instructions from the Egyptian government on social distancing, wearing protective gear and hand-washing. Social media users slammed the minister’s actions as "irresponsible."

They also criticized Egypt’s donation of medical supplies to other countries while they are sold in the Egyptian market at high prices if they are available at all.

“In implementation of Sisi's instructions, the Egyptian Minister of Health is without a face mask in Italy accompanied by the Italian Minister of Foreign Affairs de Maio to provide medical assistance. Doctors of Egypt are performing their jobs without masks and everyone complains about the lack of equipment in the face of coronavirus,” tweeted TV presenter and journalist Osama Gaweesh. “The world is on alert and Egypt is looking for a show,” he added.

Others linked the visit to strained ties between Italy and Egypt since the killing of Italian student Giulio Regeni, suspecting an attempt to improve relations.

Ikram Badr el-Din, a professor of political science at Cairo University, said that Zayed’s visit to Italy is a show of solidarity and standing with the Italian government and people.

“Egyptian-Italian relations have been harmed over the past few years following the killing of Regeni and Egypt is trying to show its support and solidarity with the Italian people — relations that extend back decades,” he told Al-Monitor.

Badr al-Din added that Italy is one of the eastern Mediterranean countries that share important economic, commercial, tourist and cultural ties with Egypt. He stressed that sending two military planes loaded with medical supplies to Italy reflects the depth of relations between the two countries and Egypt's supportive role in this crisis. Al-Din added that there is cooperation between the two countries to explore for gas in the eastern Mediterranean Sea as well.

Parliamentarians have lauded the minister’s visit to Italy, saying that it not only reflects Egypt’s solidarity with other countries but also shows that Egypt is keen to enhance its relations with its trade and economic partners.

Parliamentarian Mohamed Abu Hamed said that Italy is one of the European Union countries that support Egypt and Middle East issues and one of the most important trade partners for Egypt, as the two countries have cooperated in oil and gas discoveries.

“With the help of Italy, Egypt has become a regional center of energy in the eastern Mediterranean. It is also contributing to Egyptian development projects,” he told Al-Monitor.