The possibility of further Israeli annexation of occupied territories has received legitimacy from the Israeli government, pushing even further into the abyss the slight possibility of a two-state solution. 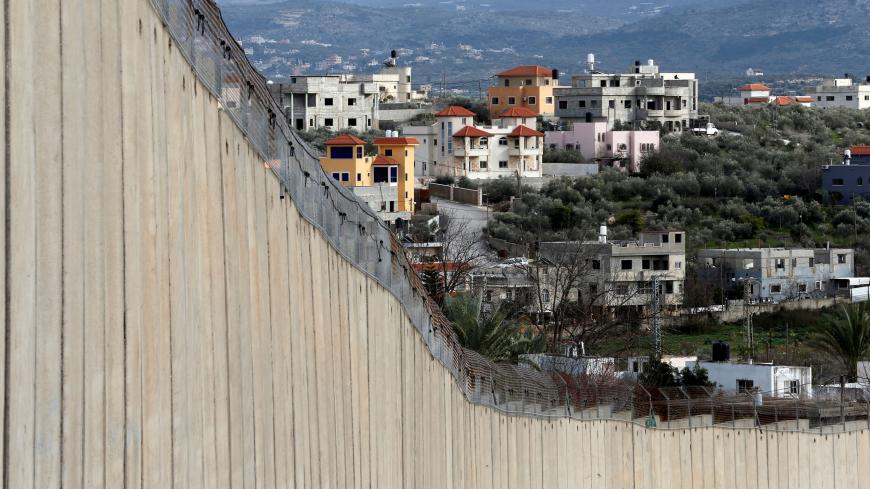 The Palestinian village of Nazlat Isa in the Israeli-occupied West Bank is seen behind the Israeli barrier from the Arab-Israeli village of Baqa al-Gharbiyye, Israel, Feb. 1, 2020. - REUTERS/Ammar Awad

After over 53 years of occupation, an Israeli government is on a path to further annex occupied Palestinian territory. On June 28, 1967, the Israeli Knesset approved a decision to annex East Jerusalem to Israel and on April 20, 2020, the government partnership agreement laid the groundwork for what officials call “extension of Israeli sovereignty.”

The agreement signed April 20 between former Israeli army chief Benny Gantz and caretaker Prime Minister Benjamin Netanyahu places some conditions before this is to take place. Under the deal, the Israeli government or the Knesset can begin annexation proceedings July 1 based on the peace plan of the Donald Trump administration.

PLO Executive Committee Secretary-General Saeb Erekat reacted angrily to the deal, saying it rules out any negotiated peace agreement. “A government coalition based on a commitment to annex more occupied Palestinian territory is a threat to a rules-based world order in general, but to peace, security, and stability in the Middle East in particular,” Erekat said in a statement following the announcement of the new Israeli government.

Hanan Ashrawi, a PLO Executive Committee member, said the Israeli political establishment has united on the agenda of permanent colonization and annexation. “It is now very clear that Israeli political parties are unequivocally committed to the entrenchment and permanence of the conflict as well as the perpetual oppression of the Palestinian people with the full support and backing of the Trump administration, which is clearly intent on implementing its dangerous and objectionable plan.”

The new “emergency government” appears to have given life to the Trump administration’s almost forgotten peace plan for the Middle East, which includes the annexation of Palestinian occupied lands in exchange for a weak Palestinian entity with some land swaps in the Negev desert.

The newly signed agreement refers specifically to the Trump plan, saying, “In reference to the declaration of President Trump, the prime minister and alternate prime minister will act with the full consent of the United States, including in the matter of maps vis a vis the Americans and in international dialogue on the matter, all while pursuing to preserve the security and strategic interests of the state of Israel, including the need to keep regional stability, keep existing peace agreements and pursue future peace agreements,” according to an unofficial translation of items 28 and 29 in the plan obtained by Al-Monitor.

Aaron David Miller, who was a top adviser on Middle East peace in past Democratic and Republican administrations, told Al-Monitor that Netanyahu has avoided acting on annexation these many years. “This [governing] agreement was driven not by the Palestinian issue, but by his determination to defend himself while on trial as prime minister. That’s his main priority now. He will push it to see what’s possible — and some of it may be possible. But he won’t let it jeopardize the current arrangement,” Miller, now a senior fellow at the Carnegie Endowment for International Peace, said.

The head of the Arab Joint List, which had recommended Gantz to become prime minister, expressed disappointment and frustration, calling the deal a “slap in the face” to the majority of Israelis. “Gantz and Netanyahu's government of surrender is a slap in the face of the civilian majority who go to the polls time and time again to oust Netanyahu. Gantz was not courageous enough to triumph and chose to legitimize annexation, racism and corruption," Ayman Odeh tweeted in Hebrew. The list has 15 members in the Knesset.

Political analysts saw in the wording of the Gantz-Netanyahu deal a loophole that could prevent the possibility of annexation provided Arabs are united.

Fadi Elsalameen, a Palestinian American academic at Johns Hopkins University, told Al-Monitor that both Egypt and Jordan, which have signed peace deals with Israel, could threaten to end those pacts if the annexation is carried out. He said, “For Jordan, it threatens its national security as it implies Palestinians should seek statehood in Jordan instead of a future Palestinian state. There is an opportunity for Jordan and Egypt to work closely with the Palestinians to coordinate an international refusal of annexation.”

The annexation threat could be a perfect opportunity to Palestinians to unite and make sure that the Arab world is also united in refusing the taking of Palestinian occupied territories and the destruction of the little that is left of the possibility of a negotiated peace agreement.