Pompeo’s gift to Netanyahu might bring about new Israeli annexation

US Secretary of State Mike Pompeo’s legitimization of Israeli settlements is seen as giving a green light to Israel’s prime minister to annex the Jordan Valley if a government is formed. 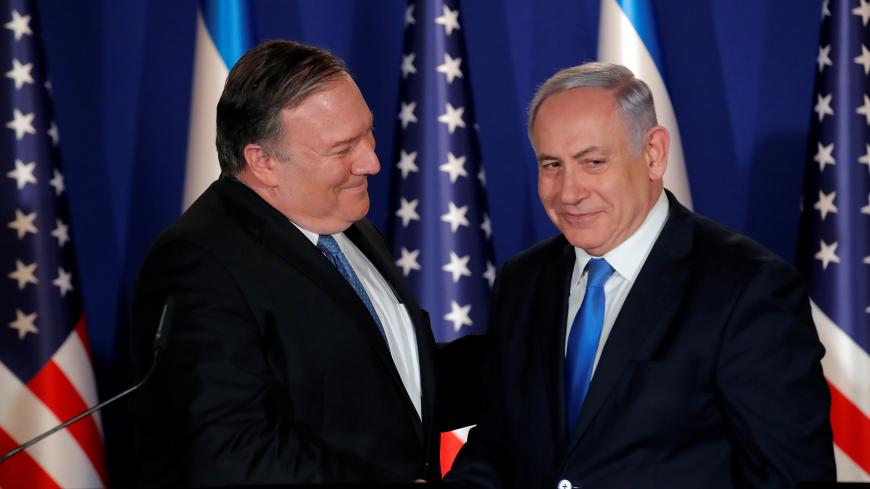 The political gift made by US Secretary of State Mike Pompeo on the eve of the expiration of the deadline for forming an Israeli government is seen by some as paving the way for Israel to further annex Palestinian occupied territories.

Pompeo reversed a longstanding US position that had declared settlements to be illegal by saying Nov. 18, "After carefully studying all sides of the legal debate ... the establishment of Israeli civilian settlements in the West Bank is not, per se, inconsistent with international law."

Pompeo’s statement directly contradicts international consensus that has existed for over five decades. The International Court of Justice ruled unanimously in 2004 on the illegality of settlements in the occupied Palestinian territories; in 1978, a US State Department legal opinion hled that the settlements were "inconsistent with international law." In December 2016, the UN Security Council vote 14-0 to approve Resolution 2334, with the Barack Obama administration abstaining and coming under domestic criticism for not having exercised its veto. The resolution referred to Israeli settlement activity as a "flagrant violation" of international law that has "no legal validity."

Husam Zumlot, former head of the Palestine mission in Washington and now Palestinian ambassador to the UK, told Al-Monitor, “We are seeing US politicians destroying world order for personal reasons. This is not a problem for Palestinians only but for the entire world.” Zumlot told Al-Monitor that for the first time, all Arab ambassadors to the UK agreed to his request to send a strongly worded statement to Washington in opposition to Pompeo's settlement declaration.

Hani al-Masri, head of the Palestinian Center for Policy Research and Strategic Studies-Masarat in Ramallah, told Al-Monitor that the Pompeo statement simply encourages radicalism. “This will encourage Israel to accelerate its settlement activities and if Netanyahu forms a coalition government and continues to be prime minister, he might very well bring about annexation of Palestinian territories.”

In the heat of the last Israeli elections in September, Netanyahu promised his right-wing supporters to annex the Jordan Valley and part of the Dead Sea, territories that fall within Palestinian areas occupied by Israel in 1967.

Fadi Elsalameen, an adjunct senior fellow at the Washington-based American Security Project, told Al-Monitor that the Pompeo statement “absolutely encourages settlers to not only steal more Palestinian land but also to act violently against Palestinians with full immunity from the US.”

Elsalameen, who comes from Hebron, fears that the Trump administration’s relaxation of the US stand on settlements will encourage Israeli governments to carry out radical actions against Palestinians. “Is a full transfer of Palestinians the next step by Israel? Will Israeli settlers who are known for their violence against Palestinians use this to further expand?”

Elsalameen, a fierce anti-corruption activist, called for national unity. “Palestinians must unite to form a national civil disobedience movement that protests nonviolently in every town, around every settlement until a fair solution is put forth by the international community. The mere existence of Palestinians is under full assault and we have to act for things to get better. This is a serious and dangerous period for all Palestinians.”

Andrea Prasow, the acting Washington director at Human Rights Watch, described, in a press release received by Al-Monitor, the existence of Israeli settlements as a war crime. “President Trump can’t wipe away decades of established international law that settlements are a war crime. The US has long benefited from adherence to the laws of war and should not abandon that, especially at the expense of Palestinian civilians.”

Uri Dromi, a former head of the Israel Democracy Institute and now director-general of the Jerusalem Press Club, told Al-Monitor that the US declaration is “a lone voice” and will not move Israel closer to annexation. “The US is a lone voice in the global community which believes that the settlements are illegal; this [statement] will not move Israel one inch toward annexation, not because Israelis care so much about international law but because they realize that annexation means one, bi-national state, where, because of demography, Israel will either lose its Jewish character or its democracy.”

Dromi noted that two out of every three Israelis still support the two-state solution. “While they are skeptical about the prospect of such solution to materialize, they will not support a government which will bury it altogether,” he added.

The former Palestinian minister of labor and now professor, Ghassan Khatib, also expressed skepticism about the fear of annexation. “Had Netanyahu become a fully empowered prime minister or part of a coalition government, annexation would have been inevitable. But if he is out, as seems to be, then the probability is much less. I believe breaking this unholy combination (Trump-Netanyahu) by the falling of either is bad news for what they stand for and represent,” he told Al-Monitor

Writing for the Washington Jewish Weekly on Nov. 20, Ori Nir, the director of communications for Americans for Peace Now in Washington, called Pompeo’s statement an overreach. “Legitimizing settlements is yet another step that Donald Trump and his foreign policy team has taken — one in many — to wreck prospects for a two-state Israeli-Palestinian peace settlement.”

Regardless of whether Pompeo’s statement will bring about annexation or not, it clearly represents a major setback to a realistic US-led fair plan to solving the Palestinian-Israeli conflict. The Trump administration has proven more than any previous US administration that it is totally in bed with right-wing expansionist Israeli ideologues. Whether it is pandering to Christian Zionists in America or trying to give Netanyahu and right-wing Israeli a free political gift, Washington is acting against peace and justice and delaying rather than speeding up the chances for peace.