Palestinian and international experts and politicians are convinced that the extraordinary statements made by Prime Minister Benjamin Netanyahu about annexing all settlements come from the realization that he has support from US President Donald Trump for his radical call. 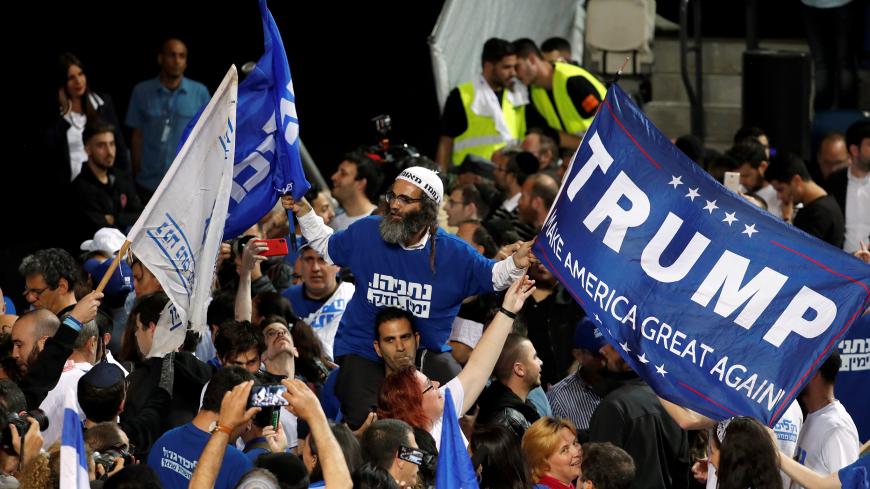 The statement by Israeli Prime Minister Benjamin Netanyahu on the eve of the elections about his intent to annex West Bank Jewish settlements to Israel will most likely resonate for a while, despite claims by some that this was simply electioneering rhetoric.

Speaking with Reuters on April 7, two days before the elections, Netanyahu made it clear that he is talking about annexing all Jewish settlements in the West Bank to Israel.

“You are asking whether we are moving on to the next stage — the answer is yes; we will move to the next stage. I am going to extend [Israeli] sovereignty and I don't distinguish between settlement blocs and the isolated settlements,” he told Reuters.

There is a general consensus among Palestinian and international experts and analysts that the Israeli leader would not have made this radical statement without the encouragement of the White House.

US President Donald Trump has reversed the long-standing international principle of the “inadmissibility of acquisition of territory by war.”

When he recognized Israel’s annexation of the Golan Heights, he set a serious precedent that appears to have given the green light to Netanyahu. By talking about annexing all settlements, Netanyahu has gone much further than all previous Israeli leaders who have hoped for annexing some of the settlement blocs that are close to the Israeli borders.

Tayseer Khaled, a member of the PLO’s executive committee, told Al-Monitor that Israel is acting without accountability. “Their statements and actions continue to escape accountability and justice given the support they get from the US, and this proves day after day blind bias to the expansionist and aggressive [Israeli] policy.”

Khaled also called on UN Secretary-General Antonio Guterres “to assume his responsibilities, to play a role in pushing UN institutions and to provide international protection for Palestinian citizens under occupation.”

Netanyahu’s pre-election promise was also seen as a “reckless act” as a result of the alliance between the far right-wing elements of Israel and the Trump administration. Azmi Bishara, director of the Doha Institute for Graduate Studies and former member of the Israeli Knesset, told Al Araby TV on April 8 that Netanyahu is taking advantage of his alliance with a US leader who deals with politics from the point of view of a “real-estate developer.”

The US role in encouraging Netanyahu is also considered a violation of US commitments made upon signing the Israeli-PLO declaration of Principles in 1993.

Ghassan Khatib, a lecturer at Birzeit University, said the United States had responsibility for making sure Israel does not carry out its annexation threat.

Khatib told Arab News on April 9 that if the Israelis carry out the annexation threat, the United States would be complicit in this act because it would be violating the principle of the integrity of Palestinian territories. This is clearly stated in the 1993 declaration of principles, of which Washington was a witness and a guarantor.

Palestinians are sick of the continuous Israeli occupation and siege and believe that Israel is taking advantage of the Palestinian division to railroad extremist measures that had been waiting for the right moment to emerge.

Meanwhile, Sarah Yerkes, a fellow in the Carnegie’s Middle East program, believes that the annexation of any parts of the West Bank “would not only kill any chance of reaching a peace deal that the Trump administration has made a top policy priority, it would also invite severe blowback from key regional allies such as Jordan, Egypt, and Saudi Arabia.”

The close connection between the Trump administration and Netanyahu appears to be greenlighting the Israeli leadership to do what it wants in Palestine/Israel.

Washington’s unprecedented steps and political gifts offered to the Israelis reflect a dangerous US policy that appears to expect a Palestinian surrender. Such attempts reflect a sense of naivete and no understanding or knowledge of the resilience of Palestinians and their refusal to leave their land; they will not change their political aspirations. Palestinians aspire to be free and to have equal rights in a state of their own.