While Palestinian-Israeli cooperation has been revved up to the highest level for some time due to the coronavirus outbreak, some problems persist. 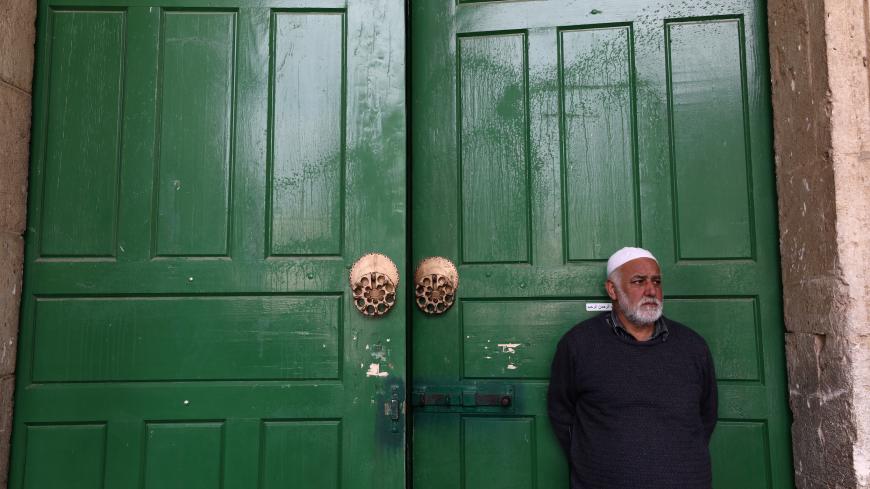 An employee of the Islamic Waqf stands in front of the closed doors of Al-Aqsa mosque in the compound known to Muslims as Noble Sanctuary and to Jews as Temple Mount in Jerusalem's Old City, after Muslim clerics shut the mosque until further notice as a precaution against coronavirus March 15, 2020. - REUTERS/Ammar Awad

The coronavirus outbreak has done what local and international politicians and activists have been unable to do. It has sparked an extraordinarily high level of cooperation and coordination between Palestinians and Israelis.

Ahmed Deek, a senior Foreign Ministry official in the Palestinian goverment, told Al-Monitor that the cooperation at the present time is “necessary and important as it serves a humanitarian [purpose] because [the outbreak] is a danger to all.”

Hussein al-Sheikh, the key Palestinian official in charge of coordination with Israel, told Al-Monitor that the relationship has improved a lot. Sheikh, who is the civil affairs minister in the government of Mohammad Shtayyeh, said a call by Israeli President Reuvlin Rivlin to his Palestinian counterpart Mahmoud Abbas was an important sign of this cooperation. “President Rivlin initiated the call to President Abbas to thank him for the high level of cooperation and coordination,” Sheikh said.

Anees Sweidan, director of the Arab Affairs Department in the PLO, told Al-Monitor that while the focus of the cooperation is on the health crisis, there are many other areas that overlap. “There is the issue of Palestinian workers in Israel, the Palestinian funds still held up by the Israelis, the need to end the security incursions into the Palestinians areas and to have older prisoners released.”

Sheikh confirmed that the agreement with the Israelis regarding workers has ensured that 45,000 workers will stay in Israel for at least one month. “We are not willing to have the workers come and go every day so we have asked and the Israelis accepted that the employers provide sufficient and reasonable accommodations for the workers during their stay,” he said. At the same time, Palestinian workers have been asked not to work in Israeli settlements and Prime Minister Shtayyeh has ordered all Palestinians to refrain from entering settlements.

Times of Israel West Bank reporter Jacob Magid said a handful of settlements have confirmed cases of coronavirus. He told Al-Monitor that there are four confirmed COVID-19 cases in the northern West Bank settlement of Einav, where "an emergency medic contracted the virus and unknowingly gave it to his wife and kids who wandered around the community before they started noticing symptoms." Magid added, “Most neighborhoods in the settlement have subsequently gone under lockdown with hundreds in quarantine.”

Sheikh said the focus of Palestinian efforts has been on prevention, saying. “If, God forbid, we have a large spread of the disease, we don’t have the means to deal with it. Our hospitals can’t handle such an outbreak and our financial situation is very limited at the present time; we have asked the Israelis to release our funds that have been held up for some time because of the current circumstances.”

The issue of all the frozen funds is problematic, Magid acknowledged. “With parliament currently shut on the orders of the Likud Knesset speaker over a spat with the Blue and White Party, the Knesset cannot even meet to consider amending the law that has frozen the funds." Passed by the Israeli parliament in 2018, the legislation orders the deduction of monies given to Palestinian prisoners and says no Israeli official can approve the release of all Palestinian funds.

Magid, who said Israeli and Palestinian finance officials met this week, said that while the Knesset is not currently in session, the Cabinet could carry out measures that could help ease the Palestinians' financial burdens. "The difference this time, though, is that Naftali Bennett is currently now defense minister and he has long pushed back on the notion that the collapse of the [Palestinian Authority] would pose a security risk to Israel. He's had no issue with pushing Ramallah to the brink."

Despite the high level of cooperation and coordination, Israeli security officials are not making any adjustments to their behavior and are not easing up their policies.

Sheikh complained that Israeli security forces broke into Bethlehem in the dawn hours of March 18 in order to make an arrest in the Dheisheh refugee camp. The governor of Bethlehem, Kamel Hmeid, called the Israeli actions “nasty.”

But Magid told Al-Monitor, “I think for the Israeli authorities it is largely business as usual. Demolitions were carried out against two makeshift buildings outside of Izzariyeh Thursday and the nightly arrests also continue to take place as usual, except now you're seeing soldiers arriving at Palestinian homes in full protective gear.”

Jibril Rajoub, the secretary of the Fatah movement, told Al-Monitor that Israel should make a serious review of its policy about imprisoned old and young Palestinians. “Due to the real danger of the situation in prisons and the potential of the spread of the virus, the Israelis should have the courage to review the situation of prisoners.” Rajoub, a possible successor to Abbas, wondered what Israel gains by keeping in prison someone such as Foad Shobaki, who is nearly 80 years old. Rajoub said, "What do they need him in prison for? The same can be said about children, women and administrative detainees, this should be an opportunity to let them go home and be safe in their own familiar settings.” Rajoub called on the international community to push Israel to release the prisoners on humanitarian grounds, "especially during this extraordinary health crisis.”