The Palestinian president’s daring visit to Israel to meet at the home of Defense Minister Benny Gantz has brought a huge storm to both of them, but Abbas and his aides insist that the visit was a final warning to Israel before things explode due to settler violence and absence of any political horizon for Palestinians. 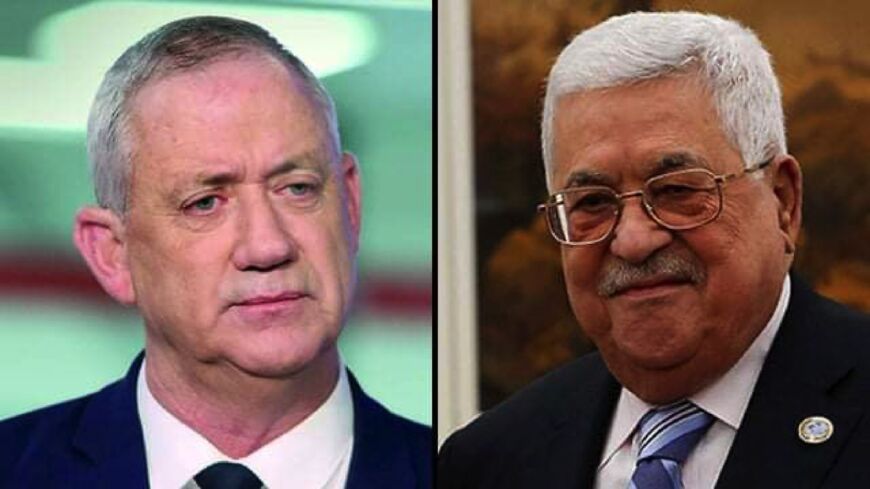 In a daring move that has produced sharp attacks from all sides, Palestinian President Mahmoud Abbas agreed to an invitation by Israeli Defense Minister Benny Gantz to visit him at his home south of Tel Aviv on Dec. 28. The meeting drew criticism of Gantz from his own prime minister and against Abbas from a wide range of Palestinian leaders.

But Hussein al-Sheikh, the lead Palestinian official responsible for liaison with the Israelis, told Al-Monitor that the visit was intended to send a final warning to the Israelis. “President Abbas made it clear to Gantz that we are witnessing the last opportunity before an explosion takes place, and that without a political formula the situation could easily blow up,” Sheikh said.

While the visit produced a financial bailout for the nearly bankrupt Palestinian government and a marked increase in family reunification cases and permits to Palestinian businessmen to enter Israel, Sheikh insisted in his interview with Al-Monitor that the bulk of the two-and-a-half-hour meeting was focused on political issues and the need to revive the political process.

Sheikh says that Israeli efforts under the guise of improving living conditions are nothing more than “cosmetic” efforts that will not be helpful if things turn badly. US State Department spokesperson Ned Price appears to have agreed, tweeting positively about the meeting.

“The U.S. is very pleased Defense Minister @Gantzbe hosted PA President Abbas at his home in Israel. We hope confidence-building measures discussed will accelerate momentum to further advance freedom, security, and prosperity for Palestinians and Israelis alike in 2022.”

But Hussam Badran, a member of the Hamas politburo, told Al-Monitor that such a visit is not accepted on either the popular front or the faction level, calling it “a continuation” of the failed path of cooperation with the occupiers. “We are against this visit in principle but also because its timing follows the increase in settler attacks against our people in the West Bank. These attacks are protected by the Israeli army headed by the criminal Gantz,” he said.

Hasan Asfour, an opposition leader affiliated with former Fatah leader Mohammed Dahlan, told Lebanese-based Al Ghad TV that Palestinians should boycott the upcoming Palestine Central Council Meeting. “Whoever goes to that meeting is a partner to the attempt of the Judaization of the Palestinian cause whose foundations were laid out in the Ras al-Ain meeting.”

Asfour, who was one of the architects of the Oslo Accord, said that the meeting “equates the popular national Palestinian resistance and the popular violence and terror.” The Central Council is expected to be held next March.

But an Israeli observer of the Middle East conflict says that the meeting is helping to reintroduce Abbas to Israelis as a source of stability.

Ofer Zalzberg, director of the Middle East Program at the Herbert C. Kelman Institute in Austria, told Al-Monitor that the visit comes after long years of nearly total neglect by Israeli leaders. “The PA is re-emerging among Israelis as the Palestinian address for civil and security coordination. It is too soon to say whether the parties would leverage this shift to overcome the deep factors that have been preventing more ambitious Israeli-Palestinian progress of a political nature, or whether they would suffice with narrower, stability-oriented steps.”

In a separate matter, the Palestinian Foreign Ministry issued a strong statement calling on the International community to bear the responsibility of the protection of the two-state solution. Ahmad Deek, director-general of the Foreign Ministry, told Al-Monitor that the silence of the international community to the Israeli settler crimes is deafening. “We call on the Quartet (the United States, Russia, the EU and the UN) to hold an immediate and emergency ministerial meeting that will prepare for an international peace conference based on the vision presented by President Abbas at the UN.”

While the Abbas-Gantz meeting has shaken the ground politically on both sides of the conflict, it is clear that it wouldn’t have happened had the Palestinian government not been in dire economic straits. Although Abbas knew beforehand that he would be criticized, he went ahead with the visit. What the visit represents is his own weakness and the difficult choices that lay ahead, as the political option has been closed shut by Israel with the Americans and Arabs agreeing to keep discussions only on economic and security issues.

The best Abbas can do in such a situation is gather as many benefits for Palestinians as possible and ensure that salaries and other essentials basic to keeping his government afloat are met.