Israeli incursions into Ramallah, along with the absence of a political horizon for Palestinians, portend a continuation of recent violence. 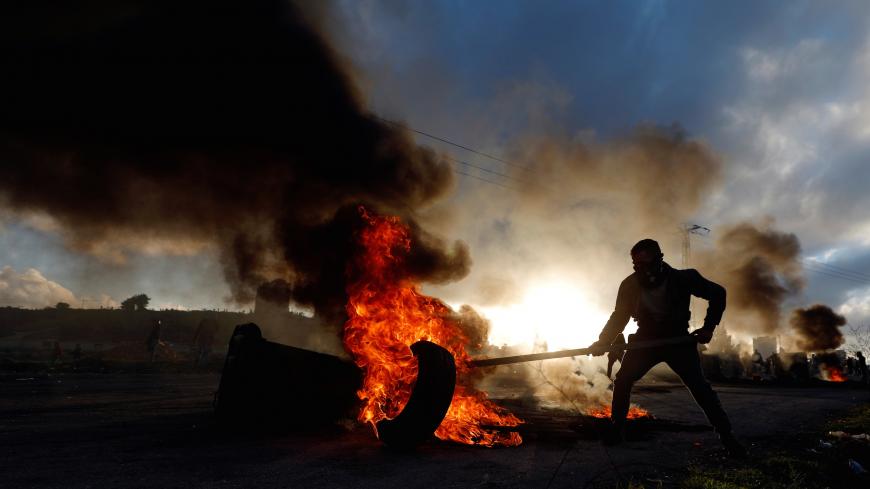 A Palestinian moves a burning tire during clashes with Israeli troops near the Jewish settlement of Beit El, near Ramallah, in the Israeli-occupied West Bank, Dec. 13, 2018. - REUTERS/Mohamad Torokman

It might be hard to pinpoint a single event or act that led to the current uptick in the cycle of violence in Palestine. The sudden rise in deaths of Israelis and Palestinians around Ramallah during a 48-hour spree is being seen as connected to the Israeli army's incursions into the city of Ramallah.

The situation has become so dire that a crisis cell was set up at the Palestinian Foreign Ministry in Ramallah Dec. 13 to “help fend off the Israeli violence.”

Many Palestinians believe that the heavy-handed Israeli army incursion into the center of Ramallah on Dec. 10 is the most important reason behind this escalation. While the Oslo Accord forbids Israeli soldiers from unilaterally entering areas that are under full Palestinian security and administrative control — known as “Area A” — Israeli security forces have repeatedly breached that agreement.

Eyewitnesses told Al-Monitor that a very large army convoy entered Ramallah Dec. 10 and headed for the offices of the Palestinian News Agency WAFA, which is located a few hundred yards from the home of President Mahmoud Abbas and across the street from the official Palestinian presidential headquarters, Al-Muqata. The Israelis barged into the state-run news agency and confiscated copies of the security camera footage.

Israel says it was searching for a car that reportedly drove by that location and was most probably in the camera archives. The sought-after driver had participated in a drive-by shooting Dec. 9 that left seven Israelis injured.

Wasef Erekat, a strategic analyst and former senior official in the Palestinian Ministry of Interior, told Al-Monitor that what the Israeli army did on Dec. 9 really shook people up. “People are asking one simple question: Who will protect us? Will it be the Palestinian security forces, or will it be the youth activists? The situation is nebulous, and things can easily erupt into a major violent confrontation or another intifada.”

“After the resignation of former Israeli Defense Minister Avigdor Liberman, Netanyahu is now serving as the minister of defense, and he is trying to divert attention from his problems. His situation has become worse after his failures in Gaza and the north [of Israel], so he is now ratcheting things up in the West Bank,” Zakout said. Netanyahu is facing multiple charges of corruption and is being blamed for the way he handled the recent cease-fire agreement with Hamas.

Zakout, who was one of the leaders of the first intifada, believes that the Palestinian leadership’s lack of action also contributed to the current situation. "The leadership has to answer people's questions and give them hope. It must be close to the people, listen to their aches, and try to understand and address them.”

The statement noted that they hold the Israeli army responsible for the death threats against Abbas, which — according to the statement — are being made by right-wing Jewish terrorist groups that are being protected by what it called Netanyahu’s “fascist” right-wing government.

The PLO’s verbal escalation was followed by calls on the part of the Fatah movement for protests across Palestinian territories. A Fatah statement issued Dec. 13 called for national unity and said “the occupation forces and the settlers are the main enemy.”

It is unclear whether the PLO's words and the potential actions of Fatah activists will actually bring Palestinians closer. Most reports state that the individuals responsible for the shootings that targeted Israelis are either members of the Islamic Hamas movement or individuals close thereto.

Hamas issued a statement praising the attacks on Israeli soldiers. Other movements, including the Islamic Jihad movement and the Gaza-based Popular Resistance movement, followed suit.

These statements shouldn’t come as a surprise amid heightened tensions and the daily crimes committed by the Israeli occupiers. The Democratic Front for the Liberation of Palestine called on Abbas to "withdraw Palestine's recognition of the occupiers [Israel] and end the security coordination as a response to the occupiers’ crimes."

The escalating violence has clearly weakened the security coordination. The Israel army's incursions into Area A, which many believe are aimed at humiliating the Palestinian president, have badly eroded — although not stopped — the coordination.

Abbas Zaki, a member of the powerful Fatah central committee, told Arab News Dec. 14 that the intrusions are meant to humiliate Abbas. “What more do people need to see to let them give up on a process when Israelis are willing to humiliate in such a way the father of Palestinian peace?” Zaki said, in reference to Abbas.

Israelis and Palestinians appear to be returning to the tense period that brought about the siege on Al-Muqata in 2003, which eventually ended in the death of Yasser Arafat in November 2004.

The repeated Israeli incursions into what is expected to be the nascent Palestinian state on the one hand and the absence of a political horizon on the other are clearly a major cause behind the current escalating violence.