Death of Ziad Abu Ein could work to Abbas’ advantage

The death of Palestinian Minister Ziad Abu Ein could aid in taking the spotlight off President Mahmoud Abbas' recent problems and also reinforce use of nonviolent resistance, which he supports, as a strategy for ending the occupation. 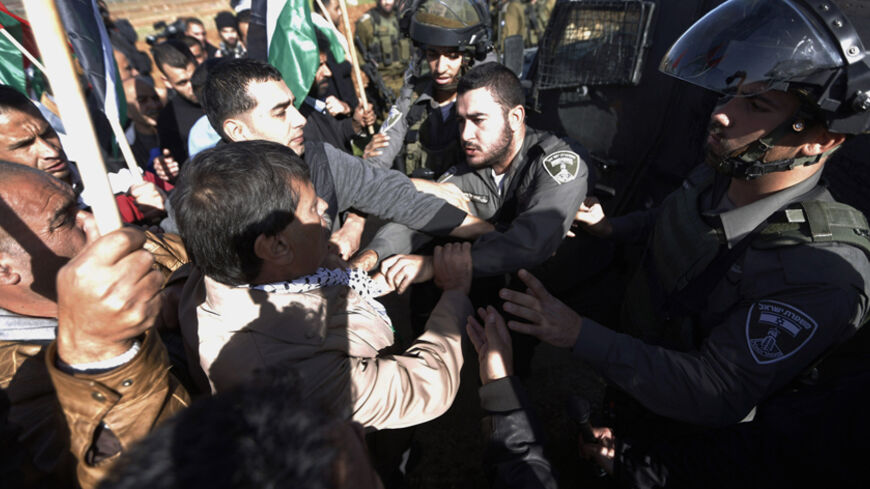 The death of senior Palestinian official Ziad Abu Ein, while he attempted to plant olive trees in Palestinian territory, is sure to reignite calls for a major discussion of Palestinian resistance tactics and strategies. Palestinian nonviolent efforts have been going on for years without producing concrete results.

At a time when negotiations had reached a dead end and armed resistance had proven extremely costly in human and other terms, an alternative strategy was sought. Palestinian President Mahmoud Abbas and others in the Palestinian national camp advocated nonviolent popular struggle as the most effective means to force Israel to end its 47-year occupation. The Israelis, who recognized how lethal responses to popular protests fueled the first intifada, have confronted the various efforts with just enough violence to try to deter, but without major fatalities.

Israel's oppressive efforts to stifle Palestinian resistance have been seen in places like Ni’llin, Nabi Musa, Nahalin and other villages where protests have been taking place every Friday for years. The demonstrations, largely against the separation wall and confiscation of Palestinian lands, have included Israeli peace supporters and international solidarity activists. Media have also had a presence, regularly filming and reporting on Israeli actions, although with time the impact of these actions diminished, in part because of the absence of fatalities. A Dec. 10 confrontation between Palestinians and Israeli forces, however, did result in a fatal injury to a senior Palestinian official.

Abu Ein had been a minister without portfolio in the Palestinian government and head of the Commission Against the Separation Wall and Settlements. Abu Ein, also a member of the Fatah Revolutionary Council (FRC), was declared dead at a Ramallah hospital after suffering serious injuries in a confrontation with Israeli troops.

Senior Fatah leader Abbas Zaki told Al-Monitor that the Palestinian leadership met late Wednesday and decided not to make any decisions until Dec. 12. “In honor of our martyr, we have decided to wait until he is properly buried,” he said in a phone interview after the rushed to a meeting at the Muqata, the Ramallah headquarters of the Palestinian presidency.

Amira Hass of Haaretz quoted Israeli sources as announcing that the autopsy on Abu Ein revealed that he had died from a heart attack, but Zaki remains adamant that he was killed by Israeli troops. “We know for certain that Ziad was killed by the Israeli army,” he said. “He has wounds in the chest, in the leg and in the neck. The camera recorded all this.” TV footage and interviews with Abu Ein minutes before the confrontation show a tall, well-built man without any outward traces of physical problems.

Possible responses to Abu Ein's death include the suspension of Palestinian security coordination with Israel, speeding up the process calling for a vote on Palestinian statehood at the UN Security Council and joining the Rome Statute. Jibril Rajoub, a senior Fatah official who has been suggested as a possible successor of Abbas, announced the immediate suspension of coordination with the Israeli army, but it was unclear whether his statement to the press was a call for a suspension or an actual decision.

When pressed on the issue raised by Rajoub, Zaki simply restated that no decision had been taken by the Palestinian leadership, but he did indicate that decisions would be forthcoming in two areas. “We will decide Friday both on what will be done outside of Palestine and what will be done inside Palestine,” he told Al-Monitor.

The issue of security coordination is perhaps the most sensitive and powerful tool in the hands of Abbas and the Palestinian government. In recent weeks, Abbas has hinted that this political weapon would be used if the peace efforts at the UN Security Council fail. Some have questioned whether Abbas would actually carry out this threat. Internal pressure from cadres for a strong response to the martyrdom of their heroic minister confronting the Israeli occupiers might prove to be stronger than a failed UN Security Council effort.

It is therefore not surprising that right-wing Israeli Defense Minister Moshe Ya’alon expressed “regret” over the death of the Palestinian minister, a sign that the Israelis are worried about the possible repercussions of the incident, including a new wave of protests and the possible suspension of security coordination.

Security coordination is an integral part of the Oslo process that gave birth to the Palestinian Authority. Abbas and key PLO officials believe security coordination to be the bridge toward Palestinian statehood. If the Israelis are clearly not open to ending their occupation, and as it becomes clear that the Israelis are opposed to both the armed resistance of Hamas and the nonviolent resistance of the PLO, it means this supposed bridge to statehood can no longer provide hope for the future.

Palestinians will most likely make the continuation of security coordination conditional on a clear time line for the end of the occupation. The only question that remains is whether the political vacuum in Israel at present can produce a guarantee for such a time line. A likely scenario therefore might be a temporary suspension to send a strong message, with perhaps a more permanent suspension after Israeli elections in March if the new government fails to honor the Palestinians' demand for a time line.

Whatever happens, and whatever the Palestinian leadership decides, there is no doubt that the Abbas presidency — which has been shaken in recent months, losing public trust — might receive a positive boost. Accusations of Abbas leaning toward a more autocratic leadership will now be forgotten temporarily, as all eyes turn to the response to the death of a senior official.

On a strategic level, the death of Abu Ein will certainly help Abbas and Fatah demonstrate that their policy of nonviolent resistance is a serious strategy that needs to be encouraged and expanded. Fatah is holding its seventh congress on Jan. 2 in Ramallah, and there is no doubt that the story of the new martyr and his effort to save Palestinian land with his body will resonate and produce a much more serious plan for Palestinian statehood based in large part on the need to support nonviolent popular resistance.