Senior Fatah officials blame Israel for the death of Palestinian Cabinet Minister Ziad Abu Ein, as does Jibril Rajoub, who says that in spite of the death of a “man of peace,” the nonviolent uprising will continue, while Israel fears escalation. 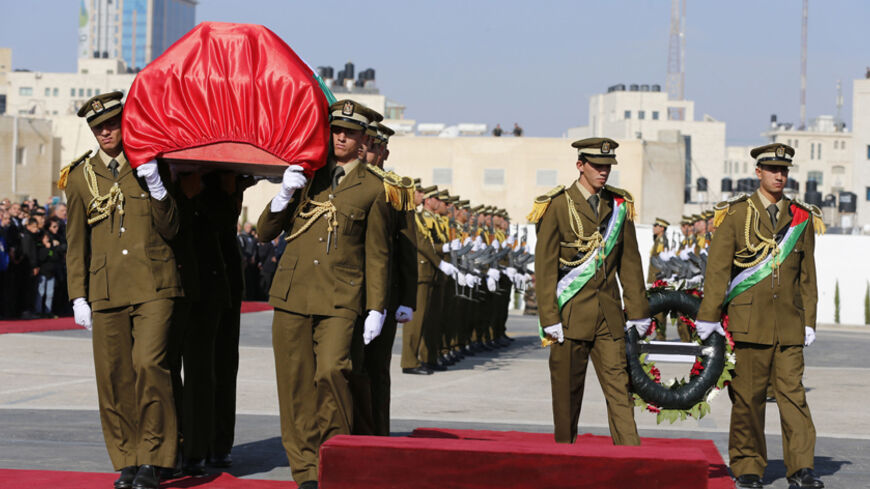 In an unusual move, the State of Israel expressed sorrow over the death of Palestinian Minister for Settlement Affairs Ziad Abu Ein, even before the autopsy results had been released. The reason was clear: Israel is concerned that Abu Ein’s death will rekindle the unrest in the territories now that the recent wave of violence has been curbed.

“We regret Abu Ein’s death and the matter is under investigation. We have proposed to the Palestinian Authority [PA] to conduct a joint inquiry, and a joint autopsy of Abu Ein’s body will be carried out. Security stability is important to both sides and we will pursue this coordination vis-a-vis the [PA],” Defense Minister Moshe "Bogie" Ya’alon said in a press release.

On the morning of Dec. 10, Abu Ein joined a demonstration near the illegal West Bank outpost Adei Ad, located in the Mate Binyamin regional council area. The minister of settlement affairs and for the struggle against the separation wall intended to show up with a few dozen Palestinians to plant olive trees near the outpost, where settlers had previously uprooted olive trees. Arriving at the scene before noon, they were stopped by Israeli border police forces stationed in the area. Video footage of the incident taken at the scene and posted on the web documents an altercation between Abu Ein and one of the soldiers, who, according to eyewitnesses, struck him with his rifle butt. The video does not show the strike, only the soldier forcefully shoving the Palestinian minister.

After collapsing and then slightly rebounding, Abu Ein managed to express to the camera of one of the reporters his anger over the disproportionate force the soldiers used in his opinion against the demonstrators. “This is a terrorist state that uses force against a nonviolent demonstration,” he said before losing consciousness. He was taken in serious condition to a hospital in Ramallah, where he died.

That night after the incident, an autopsy of Abu Ein’s body was conducted. Following the forensic procedure, Israel claimed that he had suffered a heart attack and that he was in frail health. The Palestinians, on the other hand, claimed that the examination showed that the cause of death was trauma.

In a conversation with Al-Monitor, Qadura Fares, a senior Fatah member and friends with the deceased Palestinian minister, said: “I’ve known Abu Ein for many years. He was not sick and never complained about any illness. What you Israelis are trying to do is to justify the murder. Even if we assume that he suffered a heart attack, how did he get it? He got it from the rifle with which the soldier struck him.”

The Palestinian street will likely react to this serious incident, Fares said, adding: “In my opinion, there will be a reaction, especially now when everything is so tense and so much time and effort was needed to calm the unrest on the ground. I think it’ll be hard to keep people at bay at this time, especially after the funeral.”

Active on the issue of Palestinian prisoners, Abu Ein was also a militant against the settlements in the West Bank. Arrested by Israel in 1980 after carrying out a terror attack in Tiberias that killed two Israeli teenagers, he was released five years later in the Jibril prisoner exchange deal. Within the PA he was considered as a person with much support, and as being a power focal point for young people, whom he rallied around him for popular resistance activities in the territories.

Palestinian President Mahmoud Abbas summoned the entire Palestinian leadership for an urgent meeting to discuss a response to the incident. Before and during that meeting, Fatah leaders in the West Bank as well as members of its executive committee demanded that Abbas announce immediately the discontinuation of the security coordination with Israel. According to Palestinian officials who attended that meeting, the president had to repel the heavy pressure that was wielded on him. “We need to wait for the results of the autopsy and the investigation,” the president urged, but he did not reject their demands out of hand.

One of the people who implored the president of the PA to take steps against Israel was Jibril Rajoub, a member of the Fatah Central Committee. Shortly after the meeting of the Palestinian leadership in Ramallah, Rajoub told Al-Monitor that the Palestinian reaction would remain within the confines of the unarmed popular protest, so that the world can see who is the aggressor and who defends itself and suffers. “Anyone who saw the images from the scene understands everything,” Rajoub said. “I got updates from foreign and Palestinian volunteers who attended the demonstration. They told me that there was no confrontation. Suddenly they ran into border police soldiers who started shoving and hitting everyone. In the end, Abu Ein was injured by [tear] gas, or by a rifle or by both. Sometimes when you take down somebody so violently, he ends up having a heart attack.”

The Israel Defense Forces beefed up troops in the West Bank ahead of the funeral, although Rajoub emphasized that violence from the Palestinian side was not expected. “We won’t do anything. We will continue to behave as a responsible authority in the areas that we control. But we clearly turn to our people for a popular nonviolent uprising so that the world will know that there’s a people that’s suffering, and that it’s time to put an end to Palestinian suffering. What happened to Ziad is just another example of it.”

According to Rajoub, Abu Ein was a man of peace. “He was one of the supporters of the Geneva Initiative for a just peace arrangement with Israel. He supported the two-state solution and yet was active in an unarmed manner. Ziad is a loss to the peace camp from both sides. He was in favor of coordination and cooperation between the peace camps from both sides but fell victim to violence. It is high time you drew conclusions and realized that this cannot go on for much longer.”