Rajoub: an agreement with Israel is within reach

In an interview with Al-Monitor, Fatah senior official Jibril Rajoub is optimistic on peace talks: "If the Israelis are willing, creative solutions can be found for everything.” 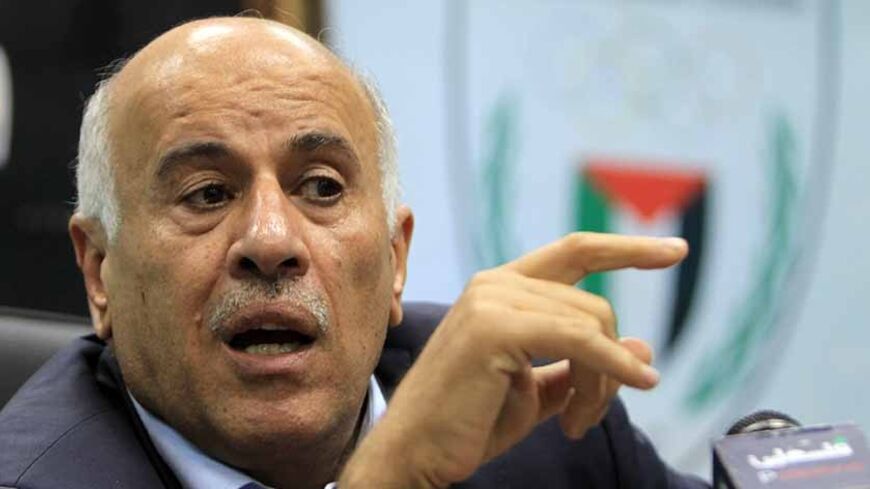 Fatah's Central Committee Deputy Secretary Jibril Rajoub is optimistic. As one of the people closest to Palestinian President Mahmoud Abbas, he is intimately aware of all the enormous hurdles and obstacles along the way to a diplomatic agreement with Israel. But in his view, Secretary of State John Kerry’s guideline will ultimately lead to a peace agreement based on a two-state solution. It is not because the Israeli leadership, headed by Prime Minister Benjamin Netanyahu, is interested in a compromise with the Palestinians, but because of international pressure on Israel, which has been intensifying over time.

“Netanyahu is the neighborhood bully,” he kept repeating every few moments during a phone call this week on Feb. 10 with Al-Monitor, “but the expansion in the West Bank, the settlements, the racism and the annexation of land — all that is over.” Rajoub explains that even Netanyahu now realizes that the rules of the game have changed, and what two intifadas and a violent struggle against Israel have failed to achieve, the international Boycott, Divestment and Sanctions movement (BDS) will. “It should worry the Israelis. Israel has become an extremist state. What is happening with the settlers in the West Bank is a black stain on the Jews, and I don’t want to use any worse terms to describe it.”

According to the senior Fatah member, “If the Israelis want to ensure their future and the future of their grandchildren, the way to do that is through a Palestinian state. Netanyahu is now facing the entire world, and he is no longer able to dictate his will. He knows that he must accept international norms, because the world has changed. Everyone is fed up.”

Rajoub returned to the West Bank this week after attending the opening ceremony of the Winter Olympics in Russia in his capacity as chairman of the Palestinian Olympic Committee and as someone who is trying to promote various branches of sport in the Palestinian Authority (PA). However, his most important visit recently was to Tehran on Jan. 28. In an interview with Ali Hashem, Rajoub said that he arrived for talks in the Islamic Republic at the request of Abbas, to open a fresh page in the Palestinians’ relationship with the Iranian regime. He received a warm reception from Iranian Foreign Minister Mohammad Javad Zarif and returned to the West Bank feeling that closer relations are possible and will be happening soon. Palestinian Foreign Minister Riyad al-Malki will also be going to Tehran in the near future. Rajoub is not worried about the Israeli response to the change in diplomatic direction among the Palestinians. “Iran is different today,” he explains. “The Americans have already realized that, and it is a good idea for the Israelis to internalize it, too.”

Rajoub rebuffed every effort to discuss reports, published here as well, that former Fatah senior Mohammed Dahlan is planning to return to the West Bank. He is unwilling to talk about the man who was once his closest friend, but who became his most bitter enemy over time. Over the years, the two men followed a common path alongside the late PLO Chairman Yasser Arafat, once they were released from Israeli prison at the start of the first intifada and expelled from the occupied territories. In Tunisia, they were jointly appointed to the position of commanders of Fatah’s Western Front. After the Oslo Accord was signed, Rajoub was appointed commander of Preventative Security in the West Bank, while Dahlan was appointed to the same position in the Gaza Strip.

But while Dahlan, who was once considered to be Arafat’s heir, feuded with Abbas and found himself shunned by Fatah and the Palestinian leadership, Rajoub grew closer to the chairman of the PA and became one of his confidants, as well as one of the people with the greatest influence on him in all matters pertaining to the diplomatic process with Israel. Abbas’ inner circle reports that these days Rajoub is urging the chairman not to give up hope, and to make every effort to reach an agreement with Israel on the basis of a two-state solution.

“I was born optimistic,” he said, when I asked him what made him think that an agreement was achievable, despite conventional wisdom in Israel and the PA. “We appreciate Kerry and the effort he is investing to achieve peace and coexistence.”

The Palestinian leadership has a long tradition of deep distrust for American emissaries to the region, and always considered them to be biased mediators. Ever since the visits of American emissary Dennis Ross in the early stages of the fulfillment of the Oslo Accord, Secretaries of State Warren Christopher, Madeleine Albright and Hillary Clinton as well as various other emissaries, were perceived as promoting Israeli interests while discriminating against the Palestinians at the negotiating table. But that has since been turned upside down. Kerry has been subjected to harsh criticism in Israel but is praised in the PA. Rajoub is convinced that Kerry isn’t wasting his time. The pressure he is exerting and has yet to exert on Israel will eventually bear fruit.

"The Americans are also fed up with all the nonsense,” Rajoub explains. “The US administration will lead us to peace and security based on the only possible alternative: a two-state solution. All the other issues, like security, Jerusalem, the settlements, are all on the negotiating table. If the Israelis are willing, creative solutions can be found for everything. I said it once and I’ll say it again: Netanyahu can’t keep acting like a bully.” Will it be possible to include Hamas in the agreement? According to the senior Fatah member, the answer is yes: “It is possible. Many people in Hamas are pragmatists and are willing to live within the 1967 borders.”

In just a few weeks, Kerry will be presenting the framework agreement that will serve as the basis for future discussions between the Israelis and the Palestinians. Meanwhile, differences between the sides are enormous. Disputes over security control of the Jordan Valley, over Jerusalem and over the right of return are still far from being resolved. But if the person closest to the chairman of the PA is asked, he’ll say that everything is within reach.