Both Fatah and Hamas have nominally supported nonviolent resistance, but that might change should the current peace talks fail. 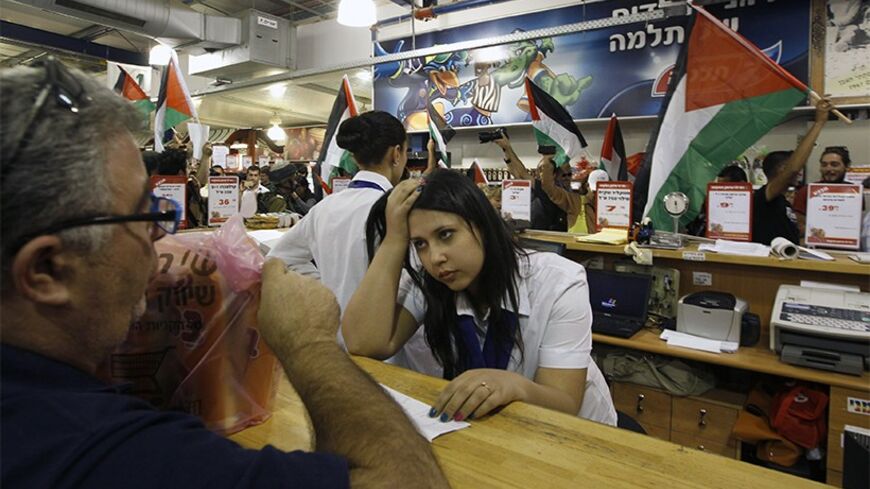 An Israeli worker holds her head as foreign and Palestinian activists march through a supermarket in the West Bank Jewish settlement of Modiin Illit, Oct. 24, 2012. - REUTERS/Ammar Awad

As Palestinian and Israeli negotiators struggle to extend the peace talks beyond the April 30 deadline, the need for a shift in liberation strategy is quickly becoming a priority.

Two distinct movements are emerging as a possible Palestinian plan B. Neither is based on violence as a viable way to reach independence — a reflection of a lack of faith in the armed struggle. Military resistance groups still remain, but they don’t appear to have any serious, workable plans to change the status quo.

Inside Palestine, various nonviolent popular resistance movements are actively working to highlight oppressive Israeli practices with a focus on the wall built deep in Palestinian territory. Outside Palestine, the most active movement is the Boycott, Divestment and Sanctions (BDS) movement. Both kinds of movements include Palestinian and non-Palestinian supporters, and both operate under a decentralized leadership, allowing autonomous activities for those expressing solidarity with it.

Neither the BDS movement nor the anti-wall resistance have reached the strength to become an actual game changer. But this can shift quickly if the peace talks collapse and the bulk of Palestinian anti-Israeli efforts are shifted to these movements.

The Palestinian leaders of Fatah and Hamas have praised both movements, although while President Mahmoud Abbas expressed his support for the boycott of Israeli settlements, he opposed the idea of boycotting the State of Israel to further the peace talks.

The attitude of some BDS leaders to the State of Israel and its existence has been the Achilles' heel of this young and highly successful group. BDS leaders in Palestine and those who follow them insist they are not anti-Semitic, but that the fundamental problem is the State of Israel's denying Palestinians their rights and maintaining an illegal military occupation. BDS leaders, many of whom believe in the one-state solution, say that it is Israel and not the settlers who are denying Palestinians the right of return, which is enshrined in UN Resolution 194. The focus on boycotting Israel has allowed Israel's defenders and apologists to claim that the movement is delegitimizing the state and is even anti-Semitic and bigoted. Nevertheless, BDS has been making impressive gains, especially in Western universities and trade unions.

Nonviolent resistance on the ground in Palestine has not had the same success. Although major Palestinian nationalist and Islamist movements publicly support and endorse what they call the “popular resistance,” there is little evidence that this support is more than lip service. Neither the PLO nor Hamas has developed any action plans that reflect the public's enthusiasm for nonviolent resistance. The PLO is still basically committed to the negotiations, while Hamas is unwilling to give up the armed struggle and its ability to deter Israeli incursions into Gaza by threatening to use rocket launchers that disturb, but don't really hurt, the Israelis.

Two other problems have prevented nonviolence from becoming the major force in Palestine. While their actions are relatively nonviolent, leaders of the movement have been unable or unwilling to show the kind of discipline that Mahatma Gandhi or Martin Luther King Jr. showed in keeping the movement totally nonviolent. This partial nonviolence that features throwing stones at Israeli troops — often at the end of a mass demonstration — not only results in a brutal Israeli crackdown, but more importantly, it weakens the stance of a nonviolent movement. By resorting to this slightly violent approach, the movement fails to enlist and retain huge crowds at its rallies.

The second problem that hampers the nonviolent movement has been its inability to involve Israeli peace activists. While some of the demonstrations against the wall do include Israeli supporters, the lack of clarity about cooperating with Israelis and the ready accusation of “normalization” has denied this movement a potentially powerful element that could have an impact on internal Israeli politics.

Perhaps because of the widely held attitude that negotiations will not produce positive results for Palestinian independence, very little effort has been made to support the peace negotiators. Activists often have a negative attitude toward the leadership’s commitments, and the leadership has a poor record of support for BDS and nonviolent resistance. The collapse of the talks could give both movements a boost. But without a clearly articulated strategy that can unite large segments of the Palestinian people and their supporters around the world, it is difficult to see how such alternatives to peace talks can produce results and improve the hands of the Palestinian negotiators.