At Mandela funeral, Abbas says he opposes boycott of Israel

Palestinian Authority Chairman Mahmoud Abbas' public criticism of the international movement of boycott, divestment and sanctions (BDS) of Israel reveals an absence of any clear strategy within his government. 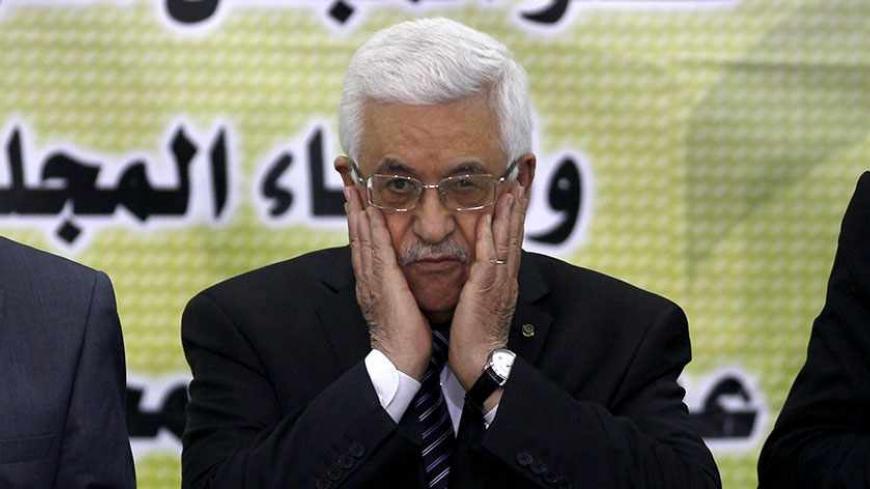 The question to Palestinian Authority Chairman Mahmoud Abbas was appropriate in time and place. At a news conference in Johannesburg where he was attending Nelson Mandela's funeral, Abbas was asked about his position regarding the international campaign for boycott, divestment and sanctions (BDS) of Israel.

Abbas’ answer, while not surprising for many considering that he's involved in negotiations, angered supporters of the BDS movement. The Palestinian leader said flat out that he doesn’t support the boycott of Israel, but that he calls for people around the world not to deal with Israeli settlers and their products. “No, we do not support the boycott of Israel,” Abbas said. “But we ask everyone to boycott the products of the settlements. Because the settlements are in our territories. It is illegal.”

Abbas’ statement reflects the reality on the ground where Palestinians without control over their land and borders have little choice but to deal with Israel. Palestinians import from Israel more than $800 million worth of goods a year.

The Palestinian leader is also locked in a nine-month negotiation process that he can’t get out of without losing at least one major promise he has made — namely to obtain the release of veteran Palestinian prisoners. Israel has agreed to release 104 prisoners over four stages, two of which have been carried out.

The statement in Johannesburg naturally has angered many Palestinian and international supporters of the BDS movement. Ali Abunimah published a scathing column calling Abbas “the de facto leader of the Ramallah-based Palestinian Authority.” In the column Abunimah quotes a South African supporter of Palestinians as being “shocked’ at the statement and comparing what Abbas said to what Bantustan (any of the former black homelands in South Africa) leaders used to say.

But this statement reflects mere lip service to the idea of nonviolent popular resistance. What made the South African liberation movement work was the international solidarity and support it received from around the world. The idea of boycotts and divestments has been seen by many as a “textbook” example of a successful international campaign.

The Palestinian leader has been consistently clear in his policy and tactics. He has rejected, before and after being elected president, any military resistance to Israel while publicly supporting popular nonviolent resistance. But Abbas’ critics have questioned his genuine support for popular resistance. On the boycott of the Israeli products campaign, Abunimah referred to the campaign website that the Palestinian government initiated under former Prime Minister Salam Fayyad, calling for a boycott of Israeli settlement products, but which is not kept up-to-date. The subtext is clear, that even on this issue of boycotting settlers, the Palestinian leadership is not really serious.

Abbas’ statement in South Africa, however, is revealing of a much deeper problem within the Palestinian national movement. The statement, more than any other, reflects the absence of any clear strategy from the Palestinian political leadership except for negotiations.

The PLO under Abbas seems to have put all its eggs in the negotiations basket. And if that does not work, they plan to use diplomatic means such as joining UN agencies, rather than any genuine nonviolent struggle inside and outside of Palestine.

It is unclear whether the reason behind the Palestinian leader’s public attack at the BDS movement is a result of trying to protect the Palestinian elite or not wanting to anger the Israelis and their US allies.

At the very least, Abbas could have stayed mute on the issue of the international campaign without giving further comfort to Israelis, who seem to like having a counterpart who will go along with them in the endless rounds of unproductive negotiations.