A Champion of Non-violence on Palestine's Tactics

As hundreds of Palestinians jailed in Israel go on hunger strike to mark "Prisoners' Day" on April 17, Al-Monitor talks to Mustafa Barghouti, an MP, the leader of Al-Mubadara and a long-time advocate of civil resistance about the effectiveness of the non-violent movement. Are boycotts working? Will Hamas renounce the armed struggle? And is a two-state solution possible? 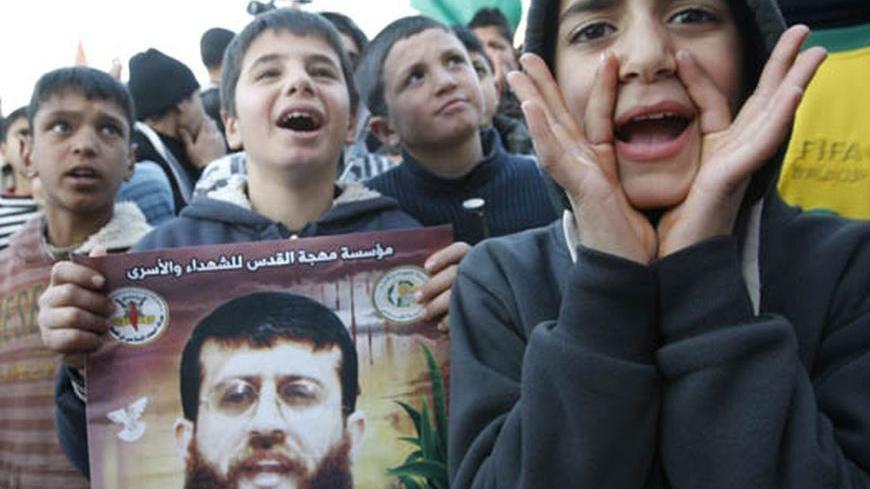 A Palestinian boy holds a poster with an image of Islamic Jihad member Khader Adnan during a news conference announcing his upcoming release outside Adnan's home in the West Bank village of Arabeh, near Jenin February 21, 2012. - REUTERS/Abed Omar Qusini

With a huge, open-ended hunger strike planned for April 17, in which all Palestinian prisoners will follow the example of Khader Adnan —who was released after a 66-day strike earlier this year—questions about the Palestinian non-violence movement have become pertinent again. Among the reasons that led Palestinian militant groups to renounce large-scale violence, one could cite the wall that Israel started building in 2002 around the West Bank to thwart suicide bombings, or Israel’s massive assault on Gaza in December 2008-January 2009 to stop rocket attacks. Hunger strikes, peaceful demonstrations against the wall and house demolitions and a fledging boycott against Israeli goods are among the new non-violent tactics adopted by Palestinians seeking an end to the occupation. To find out more about this movement, Al-Monitor spoke to Mustafa Barghouti, a medical doctor, MP, the leader of Al-Mubadara (“The Initiative”) and a long-time advocate of civil resistance.

Al-Monitor: Have Palestinians opted for non-violent resistance as a new strategy?

Mustafa Barghouthi: It has become clear that non-violent resistance is the best way. First of all, because it is the most effective way. We need to change the balance of power. Israel has a clear military superiority and non-violent resistance provides a challenge Israel is unable to meet as it exposes the real nature of the conflict, that Palestinians are the victims. Second, because it allows us to have what we need so much for the success of our struggle, which is moral integrity. And third, because it is a form of struggle that allows everybody to participate.

AM: Can you give us examples of Palestinian peaceful resistance?

MB: First, we want to break the siege of Gaza with peace flotillas, for example. Second, it involves demonstrations against settlements and the wall. Third, it includes the boycott of Israeli products and not only products from Israeli settlements. Only boycotting Israeli settlements’ products is defeating since we have found a lot of them are laundered on the Israeli market. Fourth, we support hunger strikes. On April 17, there will be a huge, open-ended hunger strike in which all Palestinian prisoners will participate following the example of Khader Adnan. There are many other ways. I have long been a proponent of building a school or a clinic in Area C [part of the West Bank under full Israeli military and civil control], which is also an act of resistance. So is staying in your home in places like East Jerusalem or Hebron when you are threatened of eviction and demolition. Going to pray in the Ibrahimi mosque in Hebron [shared by Muslims and Jews] or in Jerusalem is also an act of resistance.

AM: Is it possible to boycott Israeli goods considering the Palestinian dependence on Israel’s economy?

MB: I know we cannot boycott all the products, there are products that cannot be substituted for because our inability to control our borders. But I think 80 to 90 percent of Israeli products can be substituted with local products or products from other countries.

MB: I think it is. Two or three years ago, I didn’t think it would extend past demonstrations [against the wall] in Bil’in or Na’alin. Gradually it is becoming a style of life. We now work a lot on boycotting Israeli products mainly to bring back to people’s minds the spirit of resistance, which unfortunately was weakened after the failed Oslo agreement. Three months ago, we conducted a campaign against an Israeli brand of juice and we managed to bring down the sales in the occupied territories by 70 percent. Now we are going to target another product. We find it is more efficient to go after one product at a time. Israel does not know how to handle this change of tactics and is still using violence against our peaceful demonstrations like it did on Land Day [on March 30] when I was myself injured.

AM: The Palestinian leadership is split over civil resistance. President Mahmoud Abbas still believes in negotiations while he supports a boycott of Israeli settlements’ products and Hamas has not formally renounced the armed struggle. How can your movement be a success?

MB: The real challenge is how to have a unified and organized leadership. In terms of the acceptance of this type of resistance, I believe it is a unifying factor. Every political group, including Hamas, agreed on non-violent resistance during our last meeting in Cairo, which I participated in. Outside this agreement, there are people that want to pursue negotiations with Israel like Fatah, there are people that want to continue the armed struggle like the Islamic Jihad, but the common denominator we found during the meeting was non-violent resistance. And Hamas has given me personal assurances it would not engage in military action.

AM: Do you support jailed Palestinian activist Marwan Barghouti’s call for suspending negotiations and all cooperation with Israel and engage in popular civil resistance?

MB: Of course, I agree with that. Negotiations are deceitful and have been for a long time. It is very important that someone popular like Marwan Barghouti [no relation to Mustafa Barghouthi] would also make that call as it reflects a large opinion within Fatah.

AM: Let’s now turn to the Boycott, Divestment and Sanctions (BDS) campaign against Israel, which you support. Can you briefly describe its goals?

MB: The goal is very similar to what was done to bring down the Apartheid regime in South Africa. This is not about hurting the Israeli people; it is about hurting the system of occupation and apartheid in the Palestinian territories. We will not be able to change the balance of power only through local struggle; we need external support because Israel is widely supported internationally: economically, financially and militarily. Israel is the third largest exporter of military equipment in the world and we think that the BDS campaign provides a very important instrument to pressure Israel to end the occupation. We are asking governments to stop buying or selling military equipment, we are asking governments and companies to divest from Israeli companies that profit from the occupation, the construction of the wall and the settlements. This is also a form of non-violent resistance.

AM: Is it gaining momentum?

MB: The biggest achievement so far was the formal declaration of support to the BDS campaign by the Trades Union Congress in Britain. COSATU, [South Africa’s largest trade union federation] also endorsed the BDS call and so did the Presbyterian Church in the United States. Some companies doing business with Israeli settlements suffered as a result. Another big achievement was when the French company Alstom lost a $10 billion dollar railway contract in Saudi Arabia over its involvement in building a tram in occupied East Jerusalem that serves the Israeli settlements. I can’t say that the BDS campaign has reached a point of big change but we are moving in the right direction and we are determined to continue.

AM: How do you respond to the accusation that BDS is inciting hatred against Israel?

MB: We are not only struggling for Palestinians here but also for Israelis because the Israelis themselves will never be free unless the Palestinians are free. It is not about hatred against anybody, it is not about delegitimizing a people; it is about delegitimizing the wrongdoings of the occupation. You have to understand that we have reached a point where Israel cannot hide behind the claim that they are the victims of this conflict. It does not work anymore.

AM: But Israeli private companies or universities do not represent the government…

MB: Any company or university that supports our rights to end the occupation will not be boycotted. On the contrary, we cooperate with many Israeli institutions, which support our rights to freedom like Physicians for Human Rights.

AM: Are you hoping that the Israeli social justice protest movement last June will end up denouncing the occupation of the Palestinian territories, which happens to cost money to Israel?

MB: Up until now they haven’t. They said it would divide the movement. I believe we could help this movement because the cost of occupation in terms of military and security expenditures is hurting Israel. That said, there is already a group of wonderful Israeli activists that join our demonstrations and activities. And there are Jewish people outside Israel joining BDS. I see the creation of a new alliance. I don’t know how long it is going to take, but for the first time I see a real hope as people are joining us. We are showing the world that one thing we will never accept is to live under occupation and in a system of apartheid.

MB: My heart tells me we need two states, my brain tells me it is almost becoming impossible. If the two-state solution vanishes it will be Israel’s responsibility and it is happening with every settlement it builds. Then we only have one alternative, which is a one-state solution with a democratic system and full equal rights.