How the Palestinian Boycotts Can Work

Former Israeli Ambassador, and peace activist, Ilan Baruch asks the Palestinian leadership to exercise caution. A boycott that attempts to undermine Israel in a sweeping manner also undermines any chances for stabilizing a significant peace camp in its midst. 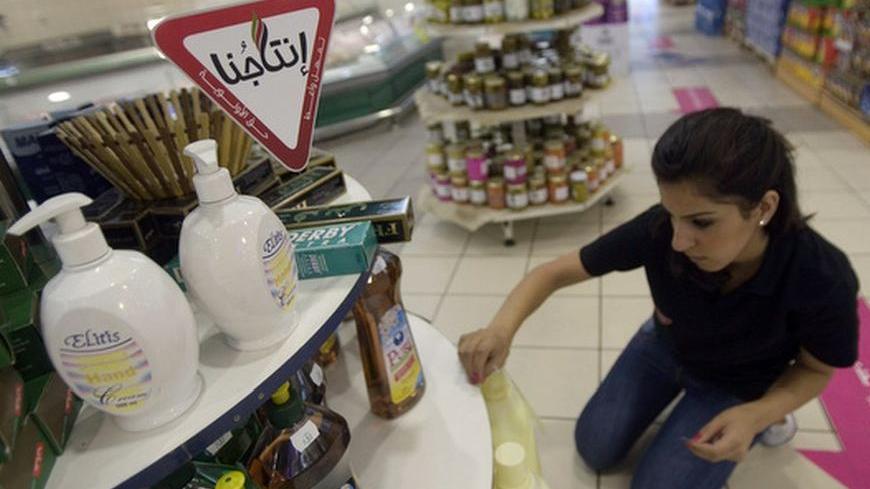 A Palestinian worker sticks Intajuna ("Our Products") stickers on Palestinian goods displayed in a supermarket in the West Bank city of Ramallah. - REUTERS/Fadi Arouri
May 29, 2012

About a year ago I left the foreign ministry after 36 years of diplomatic work. I left for political reasons: I felt that I could no longer faithfully represent a government striving to achieve political ends that I viewed as unrealistic and immoral, a government intent on abandoning the goal of ending the occupation by coming to an arrangement based on “two states for two nations.”

The day after my resignation I joined those demonstrating solidarity with the residents of the Arab Sheikh Jarrah neighborhood who were forcefully removed from their homes to vacate them for Jewish settlers. This solidarity movement expressed the joint protest of Palestinians and Israelis and intensified pressure on the State of Israel in the local court houses as well as in the international arena. This was a non-violent, joint protest based on solidarity that crossed national lines — solidarity that should be encouraged to achieve joint objectives. Another example is the regular weekly demonstrations near the separation barrier in Bili’in that were transformed into a powerful joint narrative. The decision of the High Court of Justice to instruct the IDF to change the delineation of the fence to the benefit of the village residents and the implementation of the decision represent an important moral victory for the Palestinian side of the conflict.

On the other hand, the dimensions of the Palestinian initiative for a global boycott on Israel (Boycott, Divestment and International Sanctions, or BDS) are becoming clearer day by day. They are doing this in an attempt to balance out Jerusalem’s advantages in the political arena and its success in preserving the “zero-movement” situation in the political/diplomatic arena while systematically eroding the chances for achieving peace based on “two states for two nations.”

The Palestinian hope is to generate an extensive boycott of Israeli products, of consumers of Israeli culture, of Israel’s academic reputation, and of Israeli society in general. All this, under the rubric of a non-violent struggle against the occupation, aims to de-legitimize Israel politically and morally in the eyes of the world as an occupying state.

Moreover, this struggle is also expressed by deliberate avoidance of (or even threats to) Palestinians involved in cooperative civil ventures with Israelis — even initiatives promoting the peace process and peaceful relations between the nations.

Those who support the boycott on Israel in order to impel the country to bring the occupation to an agreed-upon end want to link their struggle against the [Israeli] occupation to the struggle that brought down the apartheid regime in South Africa. Thus they paint the international boycott they are trying to implement with the colors of a moral struggle against governmental racism.

South Africa is currently celebrating 18 years of its historic victory over the apartheid regime. The removal of the apartheid government after many years of struggle and negotiations was viewed by the world as a universal victory of justice over evil. After the historic victory in the 1994 general elections, the African National Congress (ANC) leadership returned from exile to Pretoria. Thus, those countries that had hosted the ANC leaders of the anti-apartheid struggle were granted citations of honor by the new, proud South Africa. The South African narrative bestows honor on the international civil society that imposed economic, academic, cultural, political and moral boycotts on the apartheid regime and disgrace on those governments that cooperated with it. In this narrative Israel is a striking, isolated example of a country that signed political, economic and military treaties with the South African government in those dark days.

However, the instigators of the boycott against Israel are ignoring an important fact: Israel is not an apartheid state. The Zionist vision and the ethical basis uniting the communities in Israel do not at all resemble the distorted moral basis on which South Africa’s political regime was based during the apartheid era. Accusing Israel of apartheid lowers the chances that important sectors of the Israeli public will be willing to listen to the political message that the boycott is trying to send. The economic and cultural harm resulting from the boycott was not what defeated the apartheid government in South Africa. President  F.W. de Klerk went to negotiations to dramatically change the character of the state because of other factors, including dramatic geo-strategic changes in the international arena, the collapse of the Soviet empire, the emergence of Washington as a world leader — all these facilitated important changes in regional arenas and in political paradigms. One of the changes was the peace process in the Middle East that led to the Oslo Agreement, the collapse of apartheid as a political prescription and the liberation of South African states from the yoke of colonialism.

Moreover, during the current age of globalization (unlike South Africa during its apartheid era), Israel’s international status is almost immune from major damage by Palestinian boycott initiatives. Israel’s academia, culture, art, media and politics interface broadly and dynamically with the world in a mutually productive manner.

This begs the question: Why do the Palestinians insist on a boycott? There are two important motives that should not be discounted. First, the very efforts to intensify the struggle of civil society against Israel by means of imposing a world boycott is a legitimate and understandable expression of popular frustration against the Palestinian Authority for its lack of vision. Thus, the boycott is a vital initiative to mobilize Palestinian society. Second, diverting the popular uprising from violence to the boycott route gives the political movements a “second chance” for Palestinian society to shake themselves free of the Israeli occupation, given the dimensions of destruction caused by the Second Intifada as well as by the Hamas missile attacks on Israel.

As mentioned, another factor behind the boycott is the growing public and political opposition by Palestinians for continued cooperation of Palestinian civil groups with Israeli peace organizations. Yet the activities of these organizations are vital in order to counter the continuous exposure of each society to the other’s positive side on a basic human level.

While the reasons for the anti-normalization process are understood, we must understand that the damage it causes is unimaginable. For one thing, the texture of vital relationships is becoming undone. In addition, as the vision of peace dims and the conflict sharpens, contributors in Israel and abroad are less inclined to donate resources to these Palestinian organizations.

Palestinian leaders such as Mustafa Barghouti must stand up bravely to their public and sharpen the distinction between the struggle against the State of Israel and the fostering of solidarity with those parties in Israeli society (and these are not numerous or strong) that strive to assist the Palestinian struggle for freedom and dignity.

Therefore I turn to the Palestinian leadership and ask you to exercise caution. A boycott that attempts to undermine Israel in a sweeping manner also undermines any chances for stabilizing a significant peace camp in its midst. This kind of camp is crucial to continue the joint struggle for peace and to set its tone in the future.

Ilan Baruch is a career diplomat with the Israeli Ministry of Foreign Affairs with postings in  Singapore, Copenhagen , London , and as Ambassador in Manila and finally Pretoria. He headed the Multilateral Peace Process coordination, and founded the Palestinian Autonomy department at MFA and was a member of the Israeli negotiating team for the Oslo Interim Agreement signed In Washington in 1995. He chose an early retirement from MFA in 2011 on grounds of principle at age 61. A peace activist in various organizations, such as the Geneva Initiative and the Peace Now movement, he presents a weekly “political hour” on the radio "All for Peace" and is a political columnist.