The Palestinian reconciliation deal could provide an opportunity for the divided Palestinian diaspora to heal rifts. 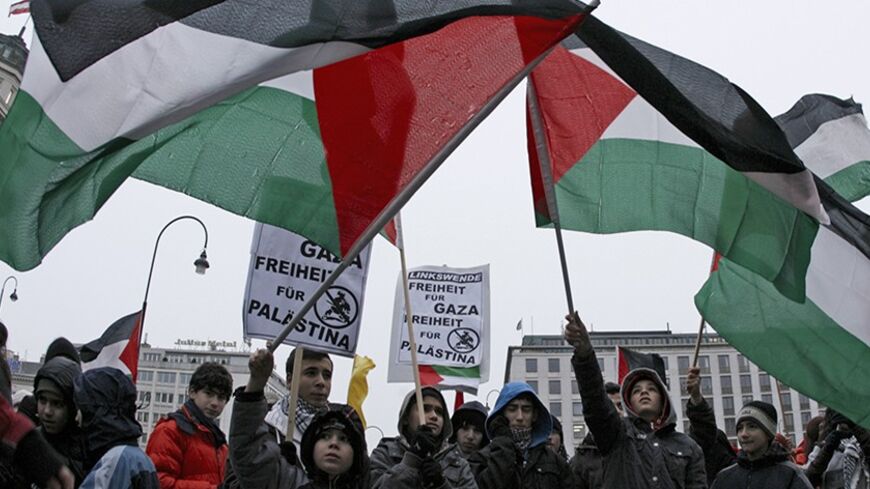 Demonstrators wave flags and hold up posters to protest Israel's military actions in Gaza, at a rally in Vienna, Jan., 5, 2009. - REUTERS/Heinz-Peter Bader

The PLO-Hamas reconciliation agreement signed in the Shati refugee camp in the Gaza Strip on April 23 is forcing Palestinians everywhere to revisit their own divisions and start working together for the common Palestinian good.

For years, Palestinians living outside the occupied territories have been divided over many fronts. Not only was the PLO-Hamas split reflected in almost every diaspora community, but there has also been a generational split and a more intense ideological one.

Palestinians and their supporters might agree on their opposition to the Israeli occupation, but they have been unable to agree as to what they are aiming for, and how they want to get there.

While the PLO-Hamas split is often reflected in radical versus moderate terms, and violent versus nonviolent resistance, a different and more intense ideological battle has been brewing. Within the largely secular, liberal diaspora, a huge split has evolved not on how to achieve independence, but what kind of Palestinian state it should be. Supporters of the two-state solution are dismissed as "appeasers" and as "traitors to the cause of the right of return," while supporters of the one-state solution are accused of preaching an ideology without providing any details on how they plan to convince Israeli Jews to come around and accept it.

The two-state versus one-state ideological divide is much more intense among Palestinians in the diaspora, especially among the young. Younger generations of Palestinians have lost hope in the Ramallah-based older generation who they feel is abandoning Palestinian national goals to stay in power. Secular Palestinians opposed to President Mahmoud Abbas and his political positions have found themselves aligned with Islamists, even though they do not see eye to eye with them on the Islamist social agenda. They also do not share the call for a purely Islamic state, nor do they — in general — support their use of violence or the targets they choose.

Perhaps this ideological division was best seen recently when Abbas was asked a simple question while visiting South Africa: "Do you support the boycott of Israel?" Instead of diverting the question, Abbas — who was deeply involved in the negotiations with Israel — said that he recognizes Israel on the 1967 borders and that he is in favor of boycotting the products of the settlements in the West Bank, but does not favor boycotting Israel. This answer might have been welcomed by Israel and the United States, but it did not bode well with many Palestinians and their supporters who see the Boycott, Divestment and Sanctions (BDS) movement as a key mechanism to bring justice to the Palestinian cause.

The BDS movement does not have a unified and agreed-upon political policy regarding a two-state or one-state solution. On the record, they are in favor of ending the 1967 occupation of Palestinian lands and equality for Palestinians who are citizens of Israel. Irrespective of the individual position of BDS leaders, it is clear that they firmly believe that sanctions must not be limited to settlers and settlements, but to the State of Israel which has been prolonging the occupation and protecting settlers living in the occupied territories.

By bringing the PLO-Hamas split to a close and by reinvigorating the PLO it is hoped that Palestinians in the diaspora would also put aside their ideological differences and work together for a common goal of ending the occupation, irrespective of what type of state will replace it.

The unity and support of a successful movement such as BDS could go a long way in improving the imbalance that has been in favor of the Israelis. Once the occupation and its continuation becomes costly and painful to Israel its days will be shortened, BDS supporters believe.

While the idea of reconciliation between nationalists and Islamists was possible due to the fact that they each had well-identified leadership structures, unity between Palestinians in the diaspora is much more challenging. It will require an honest and inclusive approach to peacemaking and would need a firm commitment to issues such as the right of return, which has been largely sidelined by the Ramallah leadership. In its zeal to persuade Israelis to support the peace talks, Abbas and his team have bent over backward to assure Israelis — in the words of Abbas — that Palestinians do not intend “to flood Israel with refugees.”

While public support for BDS and commitment to the right of return are important elements in forging ahead a newly united effort, such an effort will not happen with the current older leadership that has largely been discredited. An effort to introduce new blood as well as new and alternative ideas is badly needed if Palestinians plan to use the great reservoir of activism they have among Palestinians and their friends in the diaspora.