Shifting diaspora affairs from the purview of the PLO to the Palestinian Foreign Ministry has ruffled a number of feathers. 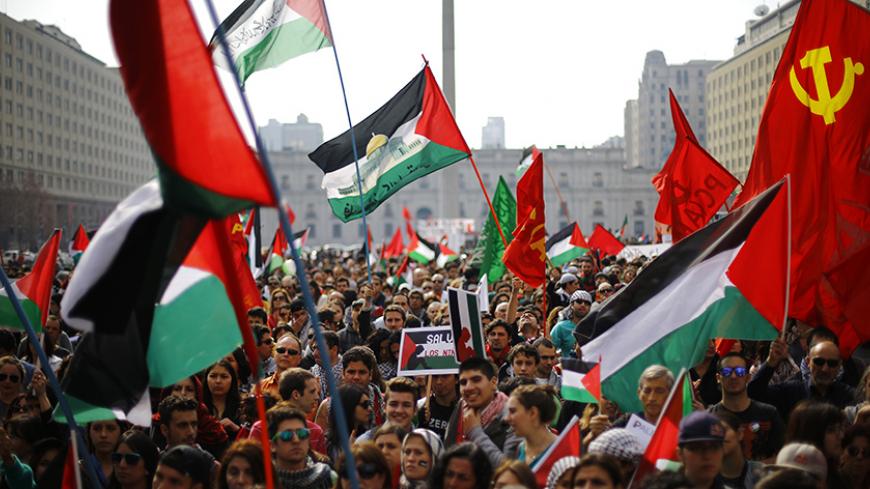 Members and supporters of the Palestinian community in Chile attend a rally for peace in Gaza, in Santiago, Aug. 9, 2014. - REUTERS/Ivan Alvarado

Since the founding of the Palestine Liberation Organization (PLO) in 1964, the group's main objective has been the unity and defense of Palestinian refugees. Diaspora Palestinians were invigorated and given a purpose by an organization dedicated to liberating Palestine and allowing them to return to their homeland.

With the signing of the Oslo Accords in 1993 and the return of the Palestinian revolutionary leaders to Palestine, the relationship between the PLO and the Palestinian diaspora began to suffer. The establishment of the Palestinian Authority, the election of a president and a legislative council, and the creation of quasi-governmental bodies reflected a change in the PLO's priorities. Going forward, its priorities would focus more on state building than raising awareness of diaspora Palestinians.

The change has been strongly felt in Latin America, home to one of the largest Palestinian communities. Hanna Safieh, the secretary-general of the Confederation of Palestinian Communities in Latin America and the Caribbean (COPLAC), told Al-Monitor, “Generation after generation, our people are proud of their Palestinian origin and have never ceased to be a full part of our people in Palestine, their pains and aspirations.”

According to official Palestinian statistics, some 450,000 Palestinians live in Latin America, including in Chile (250,000), Honduras (100,000), El Salvador (50,000) and Brazil (30,000). COPLAC, an independent civil society organization, has been the regional body unifying these communities and helping to coordinate activities there between the diaspora community and the homeland.

Despite the change in priorities in Palestine, the Latin American diaspora, through COPLAC, planned to hold a major conference on Aug. 11. All delegates from Latin American diaspora communities as well as the Palestinian leadership were informed of the event. “We were hoping that this event would invigorate the community and at the same time, we, the older Palestinians, can use it to pass the baton to the new generation of Palestinians in the diaspora,” said Safieh.

According to Safieh, the issues to be discussed included how to strengthen ties to Palestine and how to respond to anti-Islamic and anti-Arab, including anti-Palestinian, hate speech, which has been on the increase in Latin America. The plan for the gathering, however, ran into trouble. The PLO’s diaspora department, headed by Executive Committee member Tayseer Khaled, wanted to be involved and began making requests that Safieh and his colleagues felt crossed a line.

“They began asking us to change the date, to change the speaker’s roster and the topics of discussion,” Safieh said by phone from Brasilia, the Brazilian capital. Safieh and Khaled held two phone calls, but they failed to reach agreement on how to move forward to iron out their differences.

The disagreement between the PLO and COPLAC deteriorated even more when Palestinian President Mahmoud Abbas issued a presidential decree on May 24 adding “and Expatriates Affairs” to the name of the Palestinian Foreign Ministry. The decree became law after its publication in the official gazette June 18. The move made the Foreign Ministry responsible for all follow-up with Palestinian diaspora communities.

Safieh said he was surprised when he heard from heads of the different diaspora groups in Latin America that Foreign Minister Riyad Malki had written asking them to side with the PLO against Hamas, to hold new elections for their communities and to postpone the COPLAC conference until the end of 2017. Safieh then received his own missive from Malki on June 22. He said that was the last straw.

In a response to Malki, Safieh wrote that the August conference could have been held had it not been for the undermining of COPLAC's work, and that he would be submitting his resignation to the local communities, citing the "many interferences in our internal affairs.” “The serious level of intervention in our affairs was too much to take, and therefore, the conference was scrapped, and I submitted my resignation to the COPLAC secretariat,” he said. Hassan Amleh, COPLAC's president, is extremely ill, however, and that has further complicated the situation. Thus, Safieh's resignation has not been accepted or rejected.

Malki and senior officials did not respond to queries by Al-Monitor about the charges of excessive interference. A source at the Foreign Ministry, however, explained on the condition of anonymity that the reason behind the intervention was to avoid a hostile takeover by radical Islamists close to Hamas. A diaspora conference had been held in Istanbul in February and featured many Islamists and anti-Abbas representatives, according to the names and backgrounds of the main speakers and guests. At the time, the PLO described the conference as partisan and urged people not to attend, but that failed to stop it from being held.

The Foreign Ministry's name change has produced bad blood between the official in charge of the PLO's diaspora department, Khaled, and the ministry. Khaled took to the media in a scathing attack against the move, charging that the issue had not even been discussed in the PLO and that the majority of diaspora Palestinians reject the idea of having the Foreign Ministry as their point of contact. He has refused to relinquish his post, claiming that Abbas has no authority to cancel an important PLO department and arguing that a PLO department is under less pressure than a governmental ministry.

“A ministry that is under the Israeli thumb, like the Foreign Ministry, for example, can’t make a public call to Palestinians around the world to boycott or divest from Israel,” Khaled told the Gaza-based daily Felesteen July 5. He argued that the PLO, with offices around the world, has more flexibility and is under less direct pressure than a ministry operating under Israeli occupation.

Ahmad Deek, Malki’s chief of staff, issued a statement July 7 criticizing Khaled's “emotional” outburst and calling on him to stop living in “denial.” Deek noted that the Palestinian diaspora community needs a much more serious effort to unify it and to build a strong case for solidarity with Palestine. In other words, what is needed is more than what had been emanating from the PLO’s department.

A senior PLO source in Ramallah who asked to remain anonymous told Al-Monitor that the budget of the PLO’s department of expatriate affairs is a mere $2,000 a month, which barely covers Khaled’s expenses, leaving little to be spent on a serious effort to unify Palestinian diasporas and stay in contact with them around the world.

The situation in general between the PLO and the Palestinian government is in need of serious review. Retrenching the organization and its departments in this manner could prove troublesome if things do not work out well in Palestine. The situation could be extremely difficult if the Palestinian Foreign Ministry is unable to work freely as a result of the occupation.

Moving expatriate affairs from the PLO to the Foreign Ministry is also bound to be seen as a partisan act aimed at consolidating power for the Fatah movement and the Palestinian president, who also leads Fatah, rather than a unifying act.