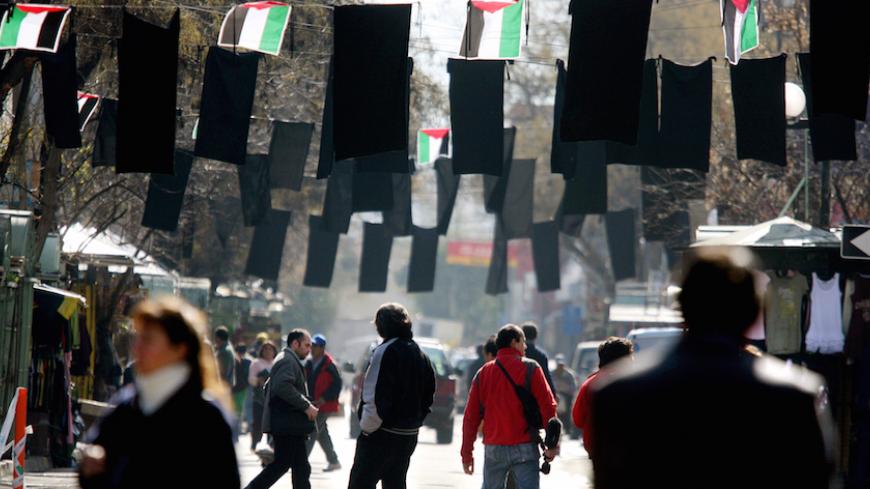 Pedestrians walk on Aug. 7, 2006, along a street decorated with black and Palestine flags next to an Orthodox church in the Patronato neighborhood in Santiago, Chile, where members of the Palestinian community attended a Mass against Israel's military offensive in Lebanon and Gaza. - REUTERS/Ivan Alvarado

As external donor support is being reduced and Israeli restrictions are increasing, Palestinians are turning to another source of support: Palestinians in the diaspora, especially those living in Latin America.

According to the Palestinian Central Bureau of Statistics, diaspora Palestinians in non-Arab countries numbered 624,824 in 2010​. By 2015, the numbers had increased to 700,000 in Latin America​, leading Latin American researcher Cecilia Baeza told Ma'an News.

Chile and Honduras have 350,000 and 280,000 of Palestinian origin, respectively. There are so many Palestinians in Chile that Mario Nazal, the director of the Palestinian Foundation Bethlehem in Chile, often says that every village in Chile "is sure to have three things: a priest, a policeman and a Palestinian.”

In Palestine, especially in the town of Beit Jala, the relationship with Chile is very evident. You can find Chile Square and the School of Chile in Beit Jala, reflecting the generous support from successful Palestinians in Chile for their ancestral town.

For the most part, those of Palestinian origins living in Latin America are highly successful in their countries, where they run thriving businesses such as banks and factories. They are active in political and social affairs, and their social and sports clubs are popular.

The success of Palestinians in the diaspora is not lost on Palestinian officials. Jihad al-Wazir, a former governor of the Palestine Monetary Authority, told Al-Monitor that during his two terms, he made several visits to South America and helped connect diaspora leaders and Palestine.

As a political breakthrough still seems far off, the efforts of Palestinian officials as well as leaders in the diaspora have been focused on finding ways to network fellow Palestinians, especially those financially successful in Latin America. For the diaspora business leaders, the desire to invest in Palestine is not open ended and a minimum requirement of good business practices and legislation is needed to encourage them to take the risk of investing in Palestine.

Wazir, now an assistant director at the International Monetary Fund in Washington, is optimistic that these efforts will produce positive results. “We have already seen investments in Palestinian banks, and we are sure others will find an appropriate business for them to invest in. While the investment must be economically sound, the Palestinians in the diaspora have special interest in Palestine’s future,” he said.

The importance of Palestinians in the diaspora, especially in the Americas, is not lost on Rateb Rabie, the president of the Washington-based Holy Land Christian Ecumenical Foundation (HCEF). Speaking to Al-Monitor by phone, Rabie said that his foundation is working hard both in Palestine and the Americas to bring about this coordination. “The majority of Palestinians in Latin America are Christians, and we are working hard to help reconnect them with cities like Bethlehem and Ramallah and to try and involve them in tourism-related investments,” he said.

As part of its efforts, the HCEF has organized a Know Thy Heritage program that urges young people of origin to visit Palestine. On July 16, the HCEF organized its 5th annual Palestinian Diaspora Conference in Ramallah. The conference was addressed by Hanan Ashrawi, a member of the Palestine Liberation Organization’s Executive Committee, who endorsed the organization for “creating a space for the collective Palestinian experience, which is important to all Palestinians, and for contributing to the revitalization of the Palestinian collective as a whole.” Ashrawi stressed that peacemaking and nation-building are not mutually exclusive, saying, “A state cannot be built under occupation.”

For his part, Rabie said he is pleased with the high level of support his organization has seen from the Palestinian leadership. “We have been well received and our coordination is at the highest level,” he said, adding, “Every relevant ministry has a department that focuses on the potential support of Palestinians in the diaspora.”

The HCEF is already planning its 18th annual international conference in Washington, scheduled to begin Nov. 14. Rabie expects it to be a unique opportunity for networking and encouraging the diaspora to visit and invest in Palestine.

Wazir said that in the first years after the Oslo Accord, the wave of Palestinians wishing to invest in Palestine faced major problems and difficulties. However, he said, “These problems have been resolved now and the government has shown a high level of support and transparency in dealing with this important asset.” Wazir was referring to accusations of corruption and of government officials receiving kickbacks from investors in the early days of the Palestinian Authority.

Efforts to bring diaspora investment to Palestine have focused on two sectors: banking and tourism. Both Rabie and Wazir stressed that the Palestinian government must do a lot more to improve the legal and administrative investment atmosphere in Palestine. According to the World Bank, Palestine is ranked 129th in the world in terms of ease of doing business.