How Palestinian security forces are cracking down on their own people

The Palestinian security forces in the West Bank are often put in an unenviable position when having to suppress their own people, particularly when it comes to protecting Israelis. 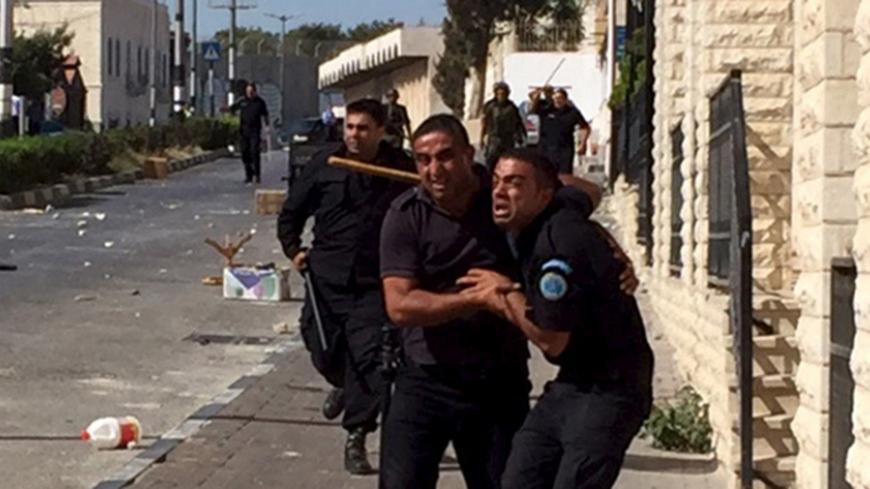 A Palestinian policeman reacts next to fellow police officers as he tries to prevent Palestinian demonstrators (not pictured) from reaching an Israeli checkpoint during a protest against the Israeli police raid on Jerusalem's Al-Aqsa Mosque, in the occupied West Bank city of Bethlehem, Sept. 18, 2015. - REUTERS/Luke Baker

It began as a demonstration against Israel on Sept. 18 following the recent incidents at Al-Aqsa Mosque, but it soon became an internal Palestinian problem that gripped the political and security leadership in Bethlehem.

The Palestinian police order to quell the protests against Israel suddenly became the focus of public attention because of the police violence against one of their own, the son of a police officer. A video taken Sept. 18 from a nearby restaurant captured Palestinian security members run after, capture and badly beat a Palestinian youth, Mohammad Radwan Hamamreh. His brother was also beaten, and both were arrested and abused on the way to the police station. The video posted on Facebook went viral and resulted in further demonstrations, which included stone throwing later that evening at the site of the Palestinian security headquarters in Bethlehem. Protesters were also recorded on video outside the police headquarters as calling for the ouster of the head of the Palestinian police, Hazem Atallah, and shouting verbal accusations against President Mahmoud Abbas, accusing him of being a “coward” and “an agent of the Americans.”

The speed with which the video was uploaded and the ensuing anti-police and anti-Abbas protests brought quick results. Prime Minister Rami Hamdallah appointed a high-level investigative committee Sept. 19 headed by Bethlehem Gov. Jibrin Bakri and instructed it to take severe punishment against anyone “who carries out violence against our own citizens.”

The Fatah movement in Bethlehem also pitched in to condemn the attack on the Palestinian youth. Mohammad Masri, the secretary of Fatah in Bethlehem, said that what had happened is contrary to the clear instructions of the Palestinian leadership and security forces. In a public event held Sept. 20, he, along with other Fatah officials, called for the removal of those involved in the police abuse.

In record time, the investigative committee produced what appeared to be impressive results. The National Security Forces Command issued a detailed statement Sept. 20 holding both the abusive policemen and their commanders responsible for the violence against Hamamreh. Nine Palestinian officers and policemen were turned over to disciplinary committees. Five policemen involved directly in the beatings were given an immediate prison sentence of three months, and four senior officers were suspended from the police force pending the end of the proceedings.

Foad Jabarin, a sports reporter from Dahriyeh village near Hebron, who works in Bethlehem, told Al-Monitor that the Palestinian police abuse is not new. “We see this all the time at sports stadiums, but what is new is the presence of video and the courage by those who took the video to post it online.” Jabarin believes that new technological development allowing Facebook users to easily upload videos played a big role in the spread of the damning footage. Palestinians in the occupied territories account for more than 1.6 million of Facebook subscribers.

On the other hand, Ali Adani, a project manager at a Bethlehem-based nongovernmental organization, the Qarya Media Institute, said that the main reason why the abuse case was quickly resolved was political. “The case was moving quickly into a mutiny against the Palestinian leadership, even members of the left-wing Popular Front [for the Liberation of Palestine] activists were jumping on board to join in the protests,” he told Al-Monitor.

Adani said that the situation in Palestine is very “fragile and tense.” The talk about the resignation of Abbas and the possible end of security coordination with Israel worries many people. “Many projects are being suspended, and people are keeping money in their pockets waiting to see what will happen when Abbas speaks at the UN next week,” he said.

A left-wing political activist from Bethlehem’s Dheisheh camp, Najeeb Farraj, blames the Palestinian security of having taken the unusual step of standing between the demonstrators and the Israelis. “In other Palestinian districts, the Palestinian security retreated, but in Bethlehem they intervened and, therefore, they became the problem,” he told Al-Monitor by email. Farraj said that the video only increased the anger of the Palestinians who are upset at what is happening at Al-Aqsa Mosque.

After the Palestinian security leadership announced the disciplinary action, a delegation of all Palestinian national leaders in Bethlehem held a press conference Sept. 20 announcing that the problem has been resolved and warning the Palestinians to refrain from attacking the public offices, and that they will no longer be protected. Hamamreh also visited the Palestinian police headquarters and posted Sept. 22 on his own Facebook page a photo of him with the police commander announcing that the case has been settled and pleading for a reduction in the sentences of the policemen involved.

While the situation in Bethlehem was quieting down, the political battle raged on in Ramallah and elsewhere in Palestine. Palestinian police spokesman Adnan Dmeiri blasted Sept. 21 Tayser Khaled, a member of the PLO’s Executive Committee from the Democratic Front for the Liberation of Palestine, for having described members of the Palestinian security as “gestapo police.” Dmeiri reminded Khaled that as a member of the PLO’s Executive Committee he is responsible for setting the policy for the Palestinian police and for holding any rogue member accountable.

The absence of a peaceful solution in the near future and repeated talks about the possibility of an end to the security coordination with the Israelis coupled with the escalation of the situation in Jerusalem has the potential of causing major unrest in the occupied territories. If the Palestinians — especially the youth — can’t see a silver lining at the end of the dark tunnel of occupation, what happened in Bethlehem last week will be children’s play as the anger and frustration will cause major havoc everywhere and to all involved.