Hamas prisoners have chosen not to join the hunger strike led by the currently imprisoned PLO leader Marwan Barghouti, making both the PLO and Barghouti look good. 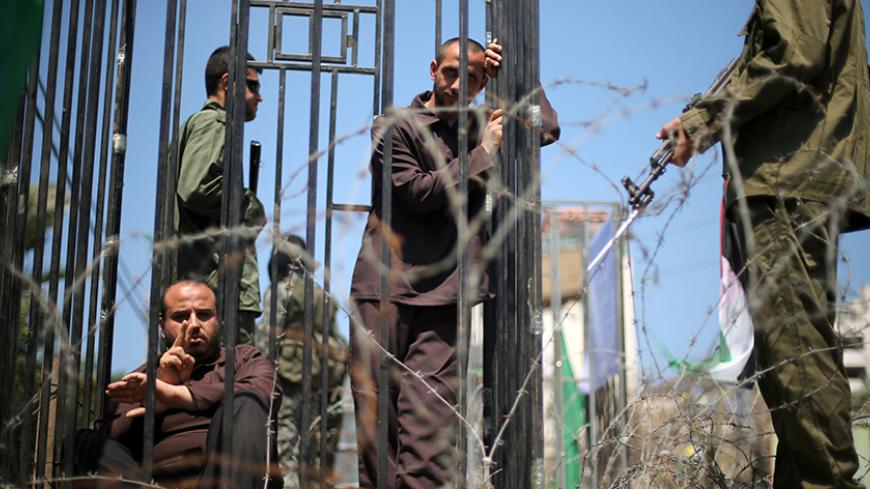 Men play the role of jailed Palestinians and Israeli soldiers during a rally in support of Palestinian prisoners on hunger strike in Israeli jails, Gaza City, Gaza, April 17, 2017. - REUTERS/Mohammed Salem

The decision by the Palestine Liberation Organization’s imprisoned leader Marwan Barghouti to lead a mass hunger strike is a political gamble that could pay off well if it succeeds. Some 1,500 prisoners held in Israeli jails, mostly belonging to the PLO secular factions, Fatah and left-wing groups, have refused to eat anything since April 17.

The hunger strike comes on the eve of Palestinian President Mahmoud Abbas’s visit to Washington on May 3 and at a sensitive time between Abbas and the Hamas leadership in Gaza. The Palestinian president appears poised to put an end to the Gaza-West Bank division, even if it requires financial and other means of pressure on Hamas.

For their part, the prisoners in Israeli jails belonging to Hamas were not enthusiastic about joining the hunger strike. Monjed Jado, the editor-in-chief of the Bethlehem-based Palestine News Network, told Al-Monitor that the vast majority of Hamas prisoners chose not to participate. “They don’t want to give any credit to Fatah and the PLO for making any tangible results, even though their demands are almost all humanitarian,” Jado said.

While a small number of Hamas prisoners have indeed joined the hunger strike in a symbolic show of unity, the majority of the movement’s members didn’t. Jihad Abufalah, a producer with the London-based Al Hiwar TV, which is close to the Islamic movements, told Al-Monitor that Hamas prisoners have chosen to stay out of the strike.

“There are about 2,000 Hamas prisoners and they have yet to decide whether or not to participate since the hunger strike is led by Fatah,” Abufalah said.

Abufalah believes that if the decision not to join the hunger strike persists, it will further fuel the internal Palestinian division rather than heal the wounds between the two major Palestinian movements.

Jado confirms that Hamas prisoners have not participated in the hunger strike, and he believes the reason is the leader of the protests. “They are concerned that any success in the hunger strike will give its leader Barghouti more popularity, and, as a result, they have taken a negative position on the hunger strike even though its demands are largely humanitarian and not political,” Jado said.

Meanwhile, Abbas is dialing up the pressure on Gaza with the aim of dislodging Hamas from its control. The Ramallah-based government has cut back on much of its spending, leaving government workers with slashed salaries in March and electricity needs without the money to pay for its fuel.

Anees Sweidan, a PLO foreign affairs officer in Ramallah, told Al-Monitor that Hamas’ problem is much bigger than the prisoners' strike. “Wednesday [April 26] will be a key day because the Fatah Central Committee is holding a crucial meeting and President Abbas will make an important speech about the future of the renegade authority in Gaza.”

Sweidan’s prediction of a gloomy situation for Hamas proved correct when supporters of the Islamic movement suffered a loss in the largest Palestinian university student council elections. Supporters of Fatah and other PLO factions handily won the student council elections at An-Najah University on April 18. The Fatah-affiliated Shabiba bloc won a total of 41 out of 81 seats while Hamas won 34. Seven seats were won by student blocs affiliated with the leftist PLO.

Municipal elections slated for May 13 will take place in the West Bank and not in Gaza, which is run by Hamas, and pro-PLO councils are expected to do much better than supporters of Hamas. In a February 2017 public opinion poll conducted by the Jerusalem Media and Communications Center, general support for Fatah was higher than for Hamas. “In general, the biggest percentage of respondents, 35.4%, still said they trust Fatah the most among the Palestinian political and religious factions, as opposed to 16.3% who trusted Hamas the most,” stated a March 2 press release.

The Palestinian hunger strike, which began with 1,500 prisoners refusing to accept any food since April 17, has escalated, with more members joining the strikers. Twenty-three Jordanian prisoners in Israeli jails joined the hunger strike April 23 as protests outside the jail have also increased.

It is unclear whether the prisoner strike will still be on when Abbas heads to Washington for an important meeting with President Donald Trump and his foreign policy team. Regardless of what happens by then, the fact that Hamas is not involved and is losing political support, as well as possibly losing control of Gaza, will certainly improve the standing of Abbas as he meets with Trump.