President Mahmoud Abbas' speech to the UN General Assembly showed that he has no credible strategy for obtaining Palestinian statehood. 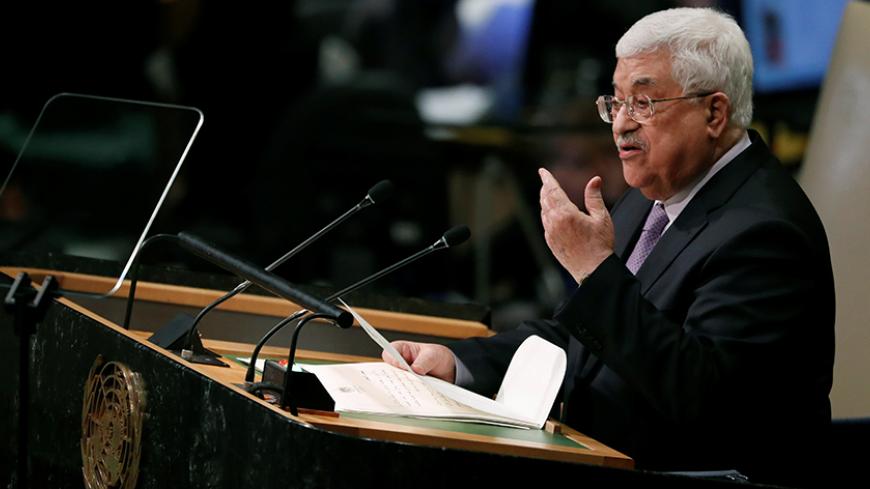 In the week before President Mahmoud Abbas’ speech to the UN General Assembly on Sept. 22, a number of Palestinians were shot and killed or injured by Israeli soldiers. On Sept. 20, Hazem Kawasmi, a Palestinian activist, made a profoundly insightful statement on his Facebook page: “We are neither in an intifada nor are we involved in civil disobedience. We have no idea where we are going.”

Kawasmi, who works with the Arab World Democracy & Electoral Monitor, told Al-Monitor that unlike the two previous intifadas, at present there is no clarity in vision. “Palestinians are not happy with the situation, because there is no vision or strategy toward liberation while the Palestinian Authority appears to be able to coexist with the current conditions on the ground.”

In his UN speech, Abbas did not reference violent acts of resistance or the possibility of a nonviolent protest movement coupled with an international boycott, divestment and sanctions campaign. He did, however, try to connect the past with the future by talking about the 100-year-old Balfour Declaration, the 71-year-old UN partition plan and the nearly half a century of Israeli occupation.

Nowhere in the speech of the Palestinian leader was there any hint of a grand strategy for Palestinian liberation. Abbas talked about the need for reconciliation and national unity, offered a peaceful and neighborly future between an independent Palestinian state and Israel, but said very little about the mechanism that Palestinians need to adopt to reach the elusive liberation that they desire.

The distance between New York and the occupied Palestinian territories is huge both in terms of geography and political relationships. What is voted on or discussed in the UN General Assembly rarely has any direct influence on Palestinians in Nablus or Hebron.

Perhaps the occupation is Israel's Achilles’ heel, as it was one of the issues US President Barack Obama touched on directly in his General Assembly speech. Israel would be better off if “it didn’t permanently occupy and settle Palestinian land,” Obama told Israelis and world leaders Sept. 21.

Continued dependency on diplomacy and expectations that Western countries will pressure Israel to attend an international conference and concede to the acceptance of a free Palestine seems to be the all that Abbas expects from his current trip to the United Nations. About the French initiative to convene an international peace conference, he said Palestinians and others are hopeful “that such a conference will lead to the establishment of a mechanism and defined time frame for an end to the occupation.”

Abbas' over-dependency on diplomacy appears to be the result of the pomp and other trappings of the presidency that he and his team have constructed around political life in Palestine. Diplomacy has become the exclusive path to liberation simply because it allows for the leadership’s political survival. Diplomacy without any means of applying pressure on Israel, however, is unlikely to produce results at the negotiating table.

Of course, it is impossible for President Abbas and his team to support any kind of violent resistance, including “low tech” violence, such as using knives and car ramming. If they did indicate serious support for violent acts of resistance, they would end up jailed or deported by Israel. That they are not condemning such acts is being used by Israel to attack them.

Nonviolent acts of resistance, however, have at times been endorsed by the leadership, with reservations. Both Abbas and Hamas leader Khaled Meshaal have publicly called for mass popular resistance, but neither has done anything to support nonviolent protest. More important, in the absence of a national strategy that Palestinians can unify behind, such ideas amount to nothing more than lip service. The Palestinian leadership has even thwarted the worldwide boycott efforts by Palestinians and their supporters by failing to get fully behind them.

During the funeral of South African leader Nelson Mandela in 2013, Abbas was confronted on the boycott issue. He insisted that his government approved of the boycott of settlement products but not the boycott of the State of Israel. Such talk shows the lack of a consistent Palestinian position on nonviolent campaigns, such as the BDS movement. The Israelis are sufficiently worried about BDS to the point of shifting resources and manpower to fight it internationally, but the Palestinian leadership remains silent about it. Some Palestinian officials, among them Hanan Ashrawi, a member of the Palestine Liberation Organization’s (PLO) Executive Committee, have expressed their support, but Abbas has yet to publicly endorse it.

The absence of a credible, unified Palestinian strategy for liberation has seriously eroded support for Abbas as well as all the established Palestinian factions. While part of the problem is the ongoing split between the two main movements, Fatah and Hamas, the problem goes much deeper.

Kawasmi's short post on Facebook reflects the thinking of most Palestinians in regard to the lack of leadership, unity and a credible national strategy for liberation. The weakened support for the organized movements, including those in the PLO, is largely because they have dropped the term “liberation” from their political program.