In a recent interview Palestinian envoy to the UN Riyad Mansour stipulated that if the Israeli-Arab conflict is not addressed, any plan for peace in the region is futile. 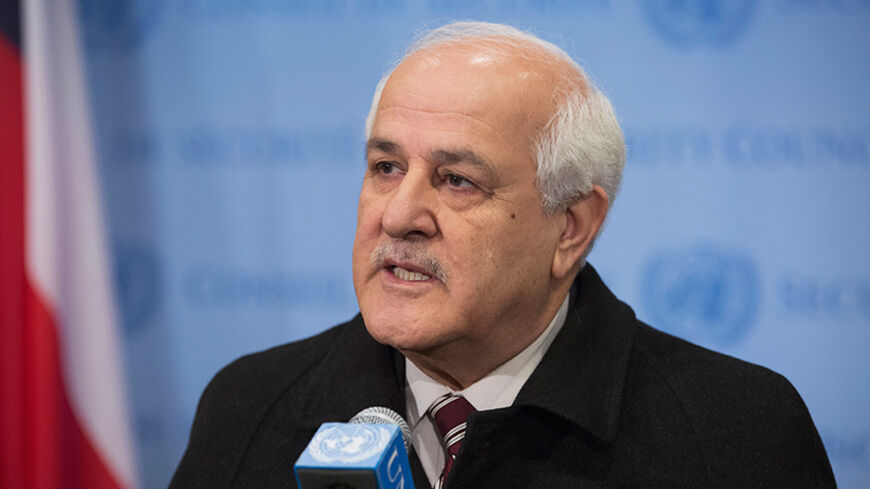 Permanent Observer to the State of Palestine to the United Nations (UN) Riyad Mansour speaks during a news conference at the UN headquarters in New York, Jan. 2, 2015. - REUTERS/UN/Evan Schneider

“The thinking is to find a way to expand the scope and the working style of the Quartet, as well as to add some countries to it that can make a valued contribution to its efforts,” said Mansour.

Mansour admitted that world leaders are totally preoccupied with the war on the Islamic State (IS), but he signaled that this effort would be a waste if it didn’t include an attempt to solve the Israeli-Arab conflict.

Mansour related Palestine’s intervention Sept. 29 in a US-initiated meeting on countering violent extremism on the sidelines of the UN General Assembly. “We made it clear that no effort to end extremism will work without dealing with the Palestine issue because the Israeli violations and occupation are poisoning the atmosphere.”

The head of the Palestinian mission at the UN also expressed support for the worldwide boycott, divestment and sanctions (BDS) efforts against Israel. “We consider the BDS to be a positive movement; we feel that the time has matured for an effective, worldwide campaign against Israel, and we will be using the UN forum at the right moment to give this effort an international impetus."

Al-Monitor spoke with Mansour a day prior to Palestinian President Mahmoud Abbas’ address before the UN General Assembly on Sept. 30. In this speech, Abbas signaled that he plans to walk away from the 20-year-old Oslo Accord. “So long as Israel refuses to commit to the agreements signed with us, cease settlement construction and release prisoners, Israel has left us no choice but to insist that we will not remain the only ones committed to these agreements,” he said to world leaders from the UN podium.

Mansour conceded that the raising of the Palestinian flag is a symbolic act, but he said that the Palestinian people are in bad need for signs of hope. "Raising the flag of Palestine is a source of pride, and we hope Palestinians all over will join us by raising our national flag.”

Below is the full text of the interview:

Al-Monitor:  With the lack of progress on the peace process and intransigence from both sides, do you expect a bigger role for the UN in the coming months and years?

Mansour:  The world’s most important forum, the UN, is an important avenue for us. We have strong support for Palestine around the world. The majority of the world community supports the need for the resolution of the conflict on the basis of the need for a Palestinian state on the 1967 borders with Jerusalem as its capital and with the need to fulfill the rights of Palestinian refugees in accordance [with] international resolutions.

Al-Monitor:  You talk about the world community, but the leaders of the most influential countries, such as Barack Obama and Vladimir Putin, didn’t even mention Palestine or the Israeli-Arab conflict in their UN speeches.

Mansour:  It is true that neither President Obama nor [President] Putin mentioned Palestine in their main speeches. The issue of Daesh [the Islamic State] has preoccupied everyone these days. We, as the Palestine mission, were invited along with 100 countries to deal with the problems of violent extremism, and we made it clear that no effort to end extremism will work without dealing with the Palestinian issue, because the Israeli violations and occupation are poisoning the atmosphere.

Al-Monitor:  What is the status of the French proposal for a UN Security Council resolution mandating the creation of a Palestinian state, and what does the Palestinian mission think of it?

Mansour:  In light of the international success in getting the Iran nuclear deal resolved, there is serious thinking by the French at following that example by creating an effective, unified, international effort and creating an acceptable mechanism that can work to find a permanent resolution.

Al-Monitor:  You mean something like what happened with the P5+1 group that hammered out the Iran deal?

Mansour:  Absolutely. The thinking is to find a way to expand the scope and the working style of [the] Quartet, as well as to add some countries to it that can make a valued contribution to its efforts.

Al-Monitor:  So is it true that US Secretary of State John Kerry has asked Abbas to delay his resignation for six months until this new process can find a way out?

Mansour:  I read about this issue in the Palestinian and Israeli press, but I don’t know where it comes from. The truth is that we have a serious problem: The peace process has been stalled and the political horizon has been blocked.

Al-Monitor:  Jordan submitted a similar resolution at the Security Council last December, yet it failed to gather the minimum nine “yes” votes required for adoption. In retrospect, does the Palestine mission regret having pushed on that issue without the necessary preparation and lobbying?

Mansour:  We have no regret about the effort deployed on Dec. 30 at the UN Security Council. The most important accomplishment of that effort was that we succeeded in getting France and Luxemburg to support the resolution publicly. We always knew from the Americans that they were going to oppose it, but we needed to move to the International Criminal Court [ICC], and therefore, when this resolution failed, we had the moral justification to move our case to the ICC.

Al-Monitor:  How can the raising of the Palestinian flag at the UN, set to occur for the first time today [Sept. 30], be translated into something more than another symbolic act?

Mansour:  Flags are important in the struggle for liberation. The symbolism is important in that it gives a clear message about our national goal. When a Palestinian flag is reassigned for the first time along with other sovereign countries, this gives our people a sliver of hope. Raising the flag of Palestine is a source of pride, and we hope Palestinians all over will join us by raising our national flag. Hopefully the weather will cooperate as we expect a high number of world leaders to join us at the flag-raising ceremony.

Al-Monitor:  Does the United Nations have the power to protect the remaining refugees of the Yarmouk camp in Syria?

Mansour:  The situation in Syria is very, very grave. We are working very hard to address the needs of our people in the Syrian refugee camp, especially in Yarmouk, but it is a big problem.

Al-Monitor:  Some expect that this year will be Abbas’ last UN speech. How do you evaluate the Abbas effect in this international body?

Mansour:  I don’t know if this will be his last speech. There are a lot of expectations about his speech and the raising of the Palestinian flag, as well as to the overwhelming world support for Palestinian independence. The president’s speech will be sympathetic to these expectations and will be in sync with the support we feel from the international community.

Mansour:  We welcome all practical actions and efforts to stand up to illegal Israeli acts including their settlements. We consider the BDS to be a positive movement and consider it part of a comprehensive strategy aimed at holding the occupiers accountable. We feel that the time has matured for an effective worldwide campaign against Israel, and we will be using the UN forum at the right moment to give this effort an international impetus.