What is Abbas' mystery proposal?

Palestinian President Mahmoud Abbas has said that he will present a diplomatic plan to John Kerry when he meets him on Sept. 3. 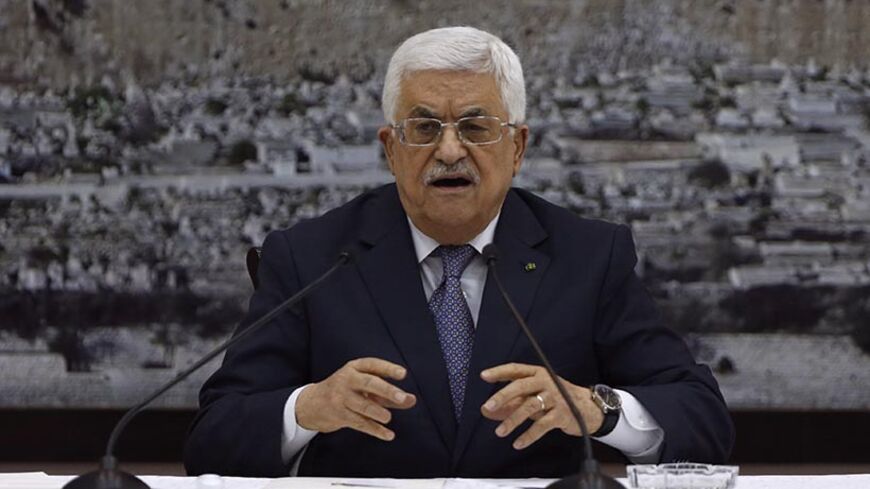 Israeli and international circles are searching for clues as to what the new Palestinian political initiative will contain. In a television interview with Egypt’s Sada al-Balad, Palestinian President Mahmoud Abbas said he was planning a major political surprise that will be made known in the coming weeks. In his victory news conference in Doha, the head of Hamas’ political bureau, Khaled Meshaal, revealed that he was made privy to the Palestinian initiative, but refrained from revealing any details. The plan will be submitted to US Secretary of State John Kerry when Abbas meets him on Sept. 3 and will be also presented for approval to the Arab League in a meeting of Arab foreign ministers on Sept. 7.

So, what is expected in this Palestinian diplomatic proposal?

It is clear that the Palestinian leader wants to take advantage of the newly discovered regional and international interest in resolving the Palestinian conflict. The 51-day war on Gaza created an international outcry, so the world is receptive to a Palestinian peace initiative that goes beyond the permanent cease-fire in Gaza.

Ever since the suspension of the US-sponsored Palestinian-Israeli peace talks in April, tensions have been on the rise and culminated in the war in Gaza. A political process dealing with the underlying issues of peace in the Middle East will certainly be welcomed both for what it will contain as well as the all-important process it may re-establish. As long as there is a peace process, people have hope.

What Palestinians, however, don’t want is an empty peace process that has no end game. Therefore, whatever Abbas has in his diplomatic pocket will most certainly be a time-based proposal. The peace process offered by the Palestinian leader will have an end date so as not to allow the Israelis to drag their feet while dismissing peace.

Another element that will surely be included in the Abbas surprise will be joining international agencies, including the International Criminal Court (ICC). Abbas has succeeded in getting the written approval of all Palestinian factions to join the Rome Statute.

The Ramallah-based leader has said repeatedly that Palestinians are no longer without negotiating assets. Abbas is well aware that both Israel and the United States are extremely opposed to the Palestinians joining the ICC and the court investigating Israeli war crimes in Gaza. Abbas is also aware that there is a strong push by the Palestinian people to hold Israeli war criminals accountable. But since it takes 60 days after legally joining the ICC for such a decision to become effective, Abbas is likely to leverage this issue.

A likely inclusion in the Palestinian offer would be a demand for the United States to join 138 UN countries that have recognized the state of Palestine as a non-member observer state based on the 1967 borders. The United States voted against the resolution, although it has publicly supported the two-state solution based on the 1967 borders. Such recognition doesn’t require the approval of the pro-Israel Congress. US-Israel relations are at an all-time low, and a serious yet clever Palestinian proposal to Washington could, if well-conceived, produce the desired result. A US-recognized state of Palestine will shift the discussion to how to make the state of Palestine free rather than continuous debate as to the purpose of the talks.

The Palestinian offer will also include a reference to the need to suspend settlement activities. This might be difficult for Israeli politicians, but if faced with the threat of being tried for war crimes, it might be the easier of the two issues.

Since the talks were suspended on the issue of prisoner release, one of the more likely elements to be included in Abbas’ peace proposal will be the release of the fourth batch of veteran Palestinian prisoners. At the start of the peace talks in September 2013, Abbas reached an agreement with Kerry that included Palestinians refraining from joining international organizations in return for Israel releasing 104 prisoners held since before the Oslo Accord in 1993. Israel released three batches of prisoners and then reneged on the fourth group, saying that it included Palestinians who are Israeli citizens or residents of Jerusalem.

The war on Gaza and the heroic Palestinian resistance to it have opened up opportunities that had not been previously available. The unity and pragmatism of Palestinians, including Hamas, provide the Palestinian leadership with unique opportunities that must be tested. A peace offer by the Palestinians at the present time will gain local, regional and international support and will have negative consequences on Israel if it rejects it. With the Israeli-Palestinian conflict continuing to poison the air in the region, putting this conflict on the right track will have benefits not only for those directly affected by the conflict, but for the larger efforts to address instability in the Middle East.