Is the Oslo Accord at death's door?

President Mahmoud Abbas maintains that as long as Israel refuses to adhere to some stipulations agreed upon in the 1993 Oslo Accord, then the Palestinians will not be the only ones "committed" to their implementation. 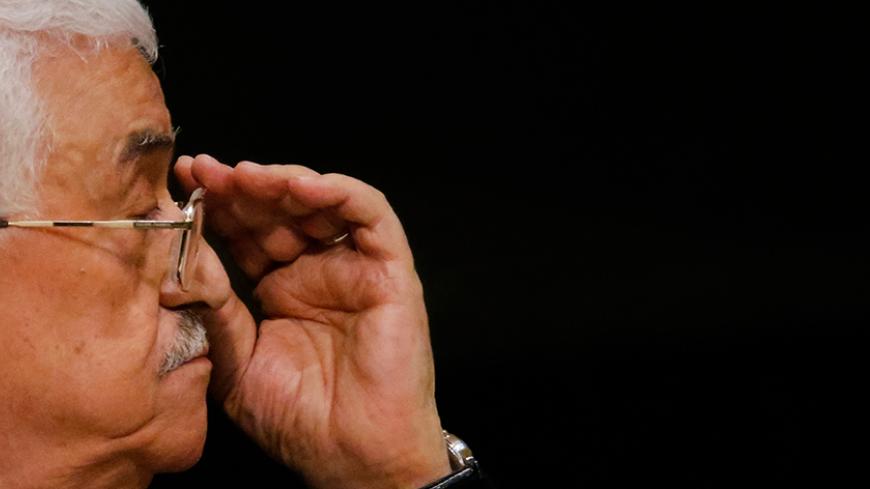 Palestinian President Mahmoud Abbas adjusts his eyeglasses as he waits to address attendees during the 70th session of the United Nations General Assembly at the UN headquarters in New York, Sept. 30, 2015. - REUTERS/Carlo Allegri

Two weeks before Palestinian President Mahmoud Abbas addressed the 70th session of the UN General Assembly, he had warned on Sept. 16 of a "political bomb" he planned to drop in his speech.

Commentators have argued that while Abbas did threaten to end Palestinian adherence to the 1993 Oslo Accord, he didn’t actually detail when and how he plans to end the legal commitment to the US-sponsored agreement.

Abbas’ comments about the agreement were stated in diplomatic terms. “As long as Israel refuses to cease settlement activities and to release the fourth group of Palestinian prisoners in accordance with our agreements, they leave us no choice but to insist that we will not remain the only ones committed to the implementation of these agreements.”

Abbas’ lawyer-like language didn’t translate into a direct and unequivocal abandonment of the accord. Some commentators said that Abbas’ actions are tantamount to exposing a hand grenade but leaving it unexploded on the table without any date of when it might explode. Others said Abbas pulled the hand grenade’s pin but didn’t throw it, implying that it might blow up in his face.

The conditionality of Abbas’ threat is worth digging into. What are the commitments that the Israelis have violated, and what are the clauses of the Oslo Accord that Abbas will stop honoring?

The Palestine Liberation Organization’s Negotiations Affairs Department published on its website an undated document pointing out nine Israeli violations of the Oslo Accord, among them failure to honor the provisions for ending the occupation, settlements, continued restrictions on movement — including the safe passage between the Gaza Strip and the West Bank — and the refusal to release prisoners incarcerated before the signing of the September 1993 agreement at the White House.

Abdelrahman Barqawi, a member of the Palestine National Council and a retired Palestinian Ministry of Health senior official, told Al-Monitor that Palestinians should suspend security cooperation, division of land and economic issues. “The division of our land into Areas A, B and C, which inexorably affects our sovereignty and hurts farmers, must end. We should also end the Paris economic agreement, which has damaged our economy, making it subservient to the Israeli financial system.”

Barqawi added that as of 1999, the Oslo Accord had in fact already “expired” but what has kept it alive has been the uneven balance of power. “At present, the Palestinian Authority and the PLO can’t bypass the Oslo Accord in one step; they must do it gradually,” he said.

Moheeb Barghouti, a poet and cultural editor at the pro-government Al-Hayat Al-Jadida, told Al-Monitor that the idea of suspending security cooperation is a mistake. “I don’t believe Abu Mazen [Abbas] will give up on security coordination, as it will put us all in a big prison and will also make it possible for Hamas to lead a coup against him in the West Bank.”

Barghouti argued that Abbas is more interested in “economic agreements, such as the Paris Protocol, than in the security ones.”

Perhaps the most circulated comments about Abbas’ UN speech were posted on Facebook by the Islamic Jihad member who carried out an attack on Israelis Oct. 3 in Jerusalem's Old City. Muhannad Halabi, from al-Bireh, had posted Sept. 30 on his Facebook page veiled criticism to the Palestinian president in regard to his inability to put a stop to the daily humiliations Palestinians suffer at the hands of the Israelis.

“Until when will we accept this humiliation and shame? How long will we keep silent?” posted Halabi on his Facebook page. Halabi, who was a law student at Al-Quds University, ends his post by asking a rhetorical question: “Is there a chance for peaceful resistance?” He then answers his own question. “The law gives one the right to defend himself and resistance is legitimate,” he argued hours before going to Jerusalem and getting killed after killing two Israelis.

Nasser Atta, a Palestinian journalist, noted that the Oslo Accord actually died back in November 1995 when Israeli Prime Minister Yitzhak Rabin was assassinated by a Jewish extremist. “When Rabin died, the Oslo Accord died with him,” Atta said, in reference to the fact that Rabin was committed to carrying out the agreement to its natural results.

But while Abbas’ speech produced a range of opinions as to what will happen next, a senior Fatah official confided to Al-Monitor on condition of anonymity that Abbas has no serious plans “at present” to abandon the Oslo Accord but wants to improve his position if and when he goes back to the negotiating table.

“Abu Mazen does not believe in anything but negotiations. He is willing to get back to the talks if the Israelis honor their commitment to release the fourth batch of veteran prisoners and to suspend settlement activities,” the source told Al-Monitor.

The source, who asked not to be identified as he is not authorized to speak to the press, added that unlike the late Yasser Arafat, Abbas “doesn’t play games and doesn’t try to shake up the talks using other means.”

The source added that Abbas is having a hard time getting his way in the upcoming seventh Fatah congress, which is theoretically due to be held Nov. 29. “He wants to anoint chief intelligence officer Majed Farraj and chief negotiator Saeb Erekat as part of his succession team, but he is facing resistance from Fatah’s Central Committee,” the source noted.

Abbas’ political efforts might have received an unexpected boost as a result of the sharp escalation of tension this week and especially since early October. As the head of a strong security force, he is able to ensure the Israelis of containing the violence without having had any role in instigating it.

In his speech at the United Nations, Abbas appeared as a leader who is at the edge of desperation and unable to provide protection or freedom to his people. His attitude added to the general feelings of hopelessness among Palestinians and closed even further any political horizon that some might have hoped for. This desperation might not lead to much change on the ground unless the international community gets involved and puts pressure on Israeli Prime Minister Benjamin Netanyahu to make a dramatic policy change.

Few Palestinians are holding their breath waiting for a rather busy international community to pay attention to the Israeli-Palestinian conflict or for the hard-line Israeli leadership to retract its repression position toward Palestinian yearnings for independence.