What were Abbas’ priorities at the Fatah congress?

The importance that Abbas gave to national issues reflects the priorities that the seventh Fatah congress will give in Palestinian affairs for years to come. 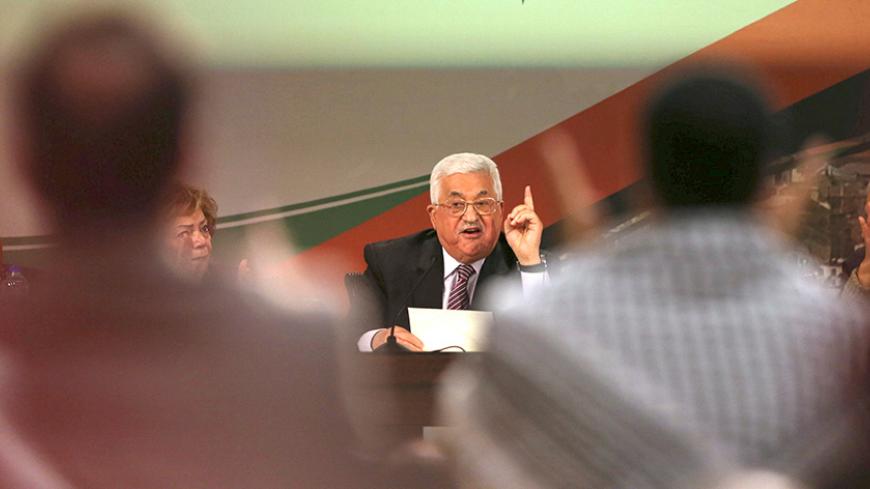 Party congresses are known for two important things: formulating policies and strategies, and electing a new leadership. Palestinian President Mahmoud Abbas dispensed with the leadership issue by getting elected by acclamation and without opposition on the first day of Fatah’s seventh congress, which opened Nov. 29, and then went on to lay out his political views for the way forward.

Abbas’ Nov. 30 three-hour speech laid out the priorities of Fatah and Palestinians and will no doubt become the guiding principles for the movement, as it tries to accelerate the reconciliation efforts with Hamas, hold a Palestinian National Council meeting, appoint a national unity government, and hold presidential and parliamentary elections.

The liberation of Palestine was the top topic in Abbas’ speech. Abbas mentioned Palestine 150 times. He also laid out a series of Palestinian accomplishments in economics, banking, education, health, information technology, commerce, sports, science, housing and various other fields. In outlining the political accomplishments, Abbas stressed that the term “Palestinian Authority” has been scrapped and replaced by the “State of Palestine” after the UN vote. “In 2012, the UN General Assembly voted to recognize Palestine as an observer state with 138 nations voting in favor of Palestine,” Abbas proudly stated. He added that this recognition made it possible for the State of Palestine to join some 522 international agencies: “We have joined 44 organizations, including UNESCO and the International Criminal Court.”

Israel was mentioned 31 times in the president’s speech, mostly in terms connected to its occupation (25 times) and settlement (six times) policies. Abbas referred to the 1993 letters of mutual recognition exchanged between the PLO and Israel, but Abbas cautioned the latter not to take them for granted. Palestinian recognition of Israel is not free of charge, he argued in his speech. “We keep repeating that our recognition of Israel is not free and must be reciprocated with a similar recognition. We also call on countries that have recognized the two-state solution to recognize both states and not one.”

In speaking to some 1,400 delegates, Abbas named all of the past leaders of the movement, including Yasser Arafat (nine mentions throughout the speech). He repeated the name of the movement 21 times as he called on all to respect the movement’s independence. “We hope that all will accept our unique and special situation and respect the national Palestinian independent decision-making process, which we have extracted through huge sacrifices as Fatah has always remained a single unified body committed to its goal and attached to its Arab affiliation and depth,” he said.

Al-Quds (Jerusalem) received 15 mentions. “I am full of hope that our next congress will be held in Al-Quds al-Sharif [Jerusalem], the eternal capital of the State of Palestine,” Abbas told the delegates and guests.

Palestinian prisoners were featured prominently in Abbas’ speech with nine mentions, especially in reference to veteran Fatah prisoners. “Israel refused to release our prisoners who were jailed before the Oslo Accord as had been agreed.” Abbas mentioned specifically Fatah leader Marwan Barghouti, who would later get the highest votes for Fatah’s Central Committee. He also reminded the congress and all Palestinians of Foad Shobaki, another senior Fatah leader currently in prison. Abbas also mentioned other Palestinian leaders and reminded everyone of Ahmad Saadat, the imprisoned secretary-general of the Popular Front for the Liberation of Palestine, as well as the longest-serving Palestinian prisoner in Israeli jails, Karim Younis.

The term “struggle” was mentioned 15 times and “popular resistance” received four mentions. "In every meeting, we repeat calls for peaceful popular struggle. This is our right to practice, and we don’t need one-upmanship on this score. We want popular peaceful resistance, and we extend our hands for peace,” the Palestinian president said.

In referring to Israel, Abbas also talked about participating in Shimon Peres’ funeral in September. “We participated in the funeral of Shimon Peres with the goal of sending a message to all that we are seeking peace and that we are willing to go anywhere to the ends of the world to accomplish the goals of our people in freedom and independence,” he said.

Abbas, the Palestinian leader who signed the Oslo Accord in 1993 on behalf of the PLO along with Peres — didn’t shy away from defending the agreement, which he mentioned nine times. “Many say, publicly or in secret, that signing of the Oslo Accord was an act of treason without knowing what it was. Oslo was a memorandum of understanding; all we did was prepare the way for the return of leaders and our cadres to the homeland. We don’t say that this was the right of return, but 600,000 have returned as a result of it.”

Unlike at the sixth congress held in Bethlehem in 2009, Hamas was not demonized at the 2016 congress. Hamas was mentioned four times in rather neutral or positive terms. “At this critical junction of our national struggle, I again make a sincere call to the Hamas movement to end the split by means of a national democratic process,” Abbas said. Hamas leader Khaled Meshaal sent a message of congratulations to the congress on its opening day. Hamas, which controls the Gaza Strip, allowed Fatah delegates to attend the congress, unlike in 2009 when the movement refused to allow them to leave Gaza.

In the long-awaited speech, Abbas showcased his accomplishments and defended his policies, but made no reference to one of the most important reasons for holding the congress. Mahmoud Dahlan, the renegade Fatah leader supported by a number of Arab countries, was not mentioned once. This reflects Abbas’ success in weathering the internal and external storms, thus ending Dahlan’s place within Fatah. The success of holding the congress and the direction it has taken bodes well for the possibility of the successful implementation of the agreements that were reached with Hamas.