Muslim and Jewish religious leaders in Israel and the West Bank are both guilty of conducting gatherings and prayers in public despite the coronavirus danger. 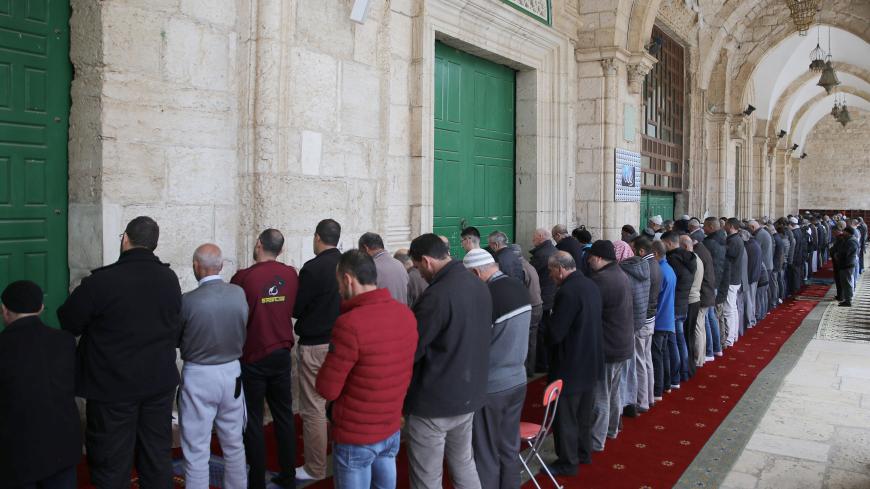 Muslims perform prayer outside the Al-Aqsa Mosque after the Islamic Waqf Department announced to close the enclosed prayer places as a precautionary measure to prevent the spread of the coronavirus (COVID-19) outbreak, Jerusalem, Mar. 15, 2020. - Mostafa Alkharouf/Anadolu Agency via Getty Images

Epidemics, like other natural disasters, have generated real headaches for religious leaders through history. Especially for the three monotheistic religions, where the concept of a one-only-God prevents believers from putting the blame on bad gods or on the devil. The priests, the rabbis and the imams need to explain why the disaster has happened, and why good people were hurt by God.

Since many of these religious leaders have no clue as to why, some of their answers can be quite dangerous. Behavior adopted by zealots who defy instructions by authorities irritates rational people, who worry about the consequences of such conduct and fear that they will be infected by those who disobey orders.

Still, looking at the larger picture, all this could help bring about important new developments in Israeli-Palestinian relations.

While the No. 1 anti-coronavirus instruction all over the world is “Don't gather, keep a distance of a meter or two from one another, wear masks!’’ the main message of the religious zealots is “Keep praying together. Whatever you try doing will not change anything, because the disaster is a God-given phenomenon, and only begging God may change things for the better.’’

Big wall posters in the Jerusalem Mea She’arim ultra-religious neighborhood call upon residents to breach instructions by authorities against mass meetings and to instead gather to pray. The danger here is obvious: Those who are not confining themselves to their own neighborhood might easily infect people outside their narrow streets. In their case, it is not a matter of negligence or economic difficulties involved in distancing themselves from others or because they live in densely populated housing; they simply don't believe that the recommendations by the experts have anything to do with COVID-19.

Ultra-Orthodox Health Minister Yaakov Litzman said in an interview March 22, “We are praying and hoping that Messiah will come by Passover time, and I am sure the Messiah will save us, just like God saved us in Egypt.’’

On the Palestinian side, a group of religious zealots who returned a few days ago from a Muslim event in Pakistan infected their neighbors in the Palestinian territories. The news about the coronavirus cases generated great criticism against the religious leadership, which allegedly dismissed the order to quarantine people who arrived from abroad for two weeks, calling upon believers to ignore the requests of more moderate imams that mosques be shut down and that public prayer not be held.

The coronavirus is triggering doomsday theories in Christianity. John's vision, in the last apocalyptic book of the New Testament (The Book of Revelation), offers a description of the end of the world as a result of epidemics and destruction. Some Christian preachers are now using the coronavirus epidemic in order to point at doomsday. Their followers are encouraged to believe that nothing can be done to prevent the epidemic, since this is the wish of God.

Prophecies that the world would be destroyed in 1666, or later on — in 2000 or even 2012 — were obviously proven false, but this has not convinced believers that the religious interpretation of today's events are just another false prophecy. They don't obey official orders and endanger those around them. The efforts of theologians — such as Ulrich Lehner at the University of Notre Dame in Indiana — to refute such theories are often uphill battles.

Jewish resources such as the Talmud mention that before the appearance of the Messiah, there will be plague all over the world, and the sinister people will die then. In the Jerusalemite Talmud (tractate Kiddushine 84), Rabbi Hanina is quoted as saying that once in 60 or 70 years, a big plague is sent by God to the world, and many people die. For Rabbi Hanina, they are not necessarily the bad people, but those who are selected by God for his own reasons. Human beings should not ask questions about God’s decisions.

Many religious leaders offer different explanations for the phenomenon of the epidemic, but with one common denominator: There is nothing you can do about the plague, other than (in some versions) pray to God.

In the past, rationalists criticized religious zealots mainly for preventing the participation of women in the labor market, or preventing their kids from learning core studies such as English and mathematics. Today, criticism is now focused on the behavior of zealots and how this directly impacts the larger society during the coronavirus pandemic. The Palestinian street is angry with those worshippers who are not refraining from praying shoulder to shoulder. The Israelis were outraged when they saw, on TV, an ultra-religious wedding party with men dancing very close to each other, defying the most important demand by the Health Ministry.

A Palestinian journalist told me about a popular saying in the streets of Ramallah these days, “Nature is much more dangerous than our neighbor.’’ He said people in the West Bank are well aware of the close cooperation between Israel and the Palestinian Authority on fighting the coronavirus threat. Obviously, they understand that the Israeli assistance stems from Israelis' own interest and not from a sudden burst of love for the Palestinians. Still, the journalist believes that in the aftermath of the pandemic, we may discover interesting and intertwined changes within Palestinian society: secularization and also openness to renew dialogue with Israel.