Shavuot is an occasion to consider the many theories regarding the lost Ark of the Covenant that have inspired believers, politicians and Hollywood, and fed the hopes of those yearning for the Third Temple. 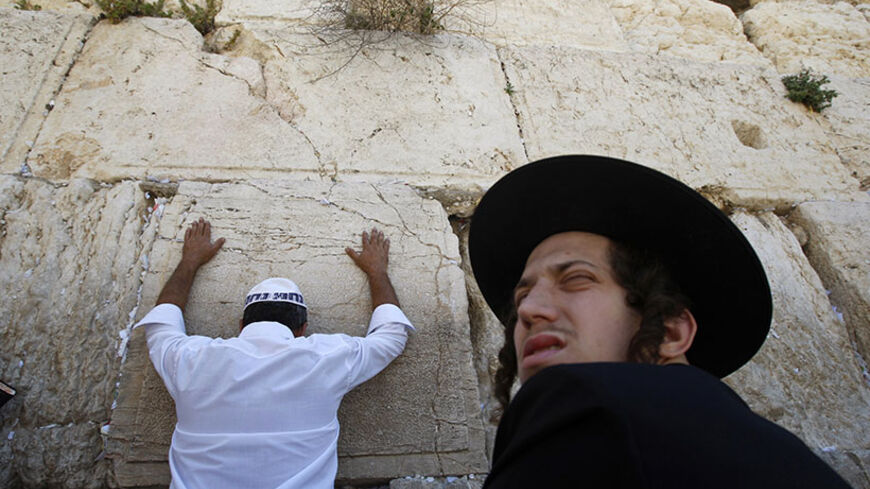 Jewish men pray in front of the Western Wall in Jerusalem's Old City as Jews prepare to mark Shavuot, the annual celebration of God's handing down of the Law (the Torah) to Moses at Mount Sinai in biblical times, according to Jewish tradition, May 28, 2009. - REUTERS/Baz Ratner

It happens relatively frequently. Every once in a while, some daring biblical researcher or pretentious archaeologist emerges to claim that he found a clue that will lead him to the Ark of the Covenant. According to Jewish tradition, the Tables of the Covenant, on which the Ten Commandments are inscribed, were kept in the ark within the temple. On June 4, the Jews celebrate Shavuot, which is identified with the Mount Sinai revelation.

But those who continue to search for the ark are not only Jews. The rest of the world has not yet abandoned the dream of finding the Holy Ark.

In July 2013, in an archaeological dig in ancient Shiloh, traces were found linking the place to the site of the Tabernacle, which housed the Ark of the Covenant until the construction of the temple. Two years earlier, in 2011, it had been argued that a church in Ethiopia was the secret repository of the ark.

If you ask the Temple Mount faithful, the answer is fairly straightforward: The ark is intact and well, securely protected within the Temple Mount itself. When we talked about the timing of the founding of the Third Temple, Rabbi Yehoshua Friedman of the Temple Institute told me, “There are 10 studies about the location of the Ark of the Covenant. We read them and studied all of them, and reached the conclusion that it’s buried in the tunnels under the Temple Mount. When the day comes, we will get to it.”

Friedman is not the only one who believes this. Numerous other Jews have reached the same conclusion, and in 1981 attempts were made to hasten the longed-for day and excavate under the Temple Mount to reveal the ark. This was no underground activity by the obsessed. It was an initiative involving the chief rabbis of the time, including Rabbi Shlomo Goren, Rabbi Ovadia Yosef and Gedalia Schreiber, the director-general of the Ministry of Religious Affairs. The effort ultimately failed amid claims of a Muslim plot to thwart the discovery.

But Friedman errs in at least one way. There are many more than 10 theories regarding the whereabouts of the Ark of the Covenant. Some of them seem totally delusional, but among them are some serious theories by erudite researchers determined to solve the ark riddle in our day.

In Steven Spielberg's classic movie, Adolf Hitler coveted the ark for its purported magical attributes, but the one who actually found it was the titular Indiana Jones. Spielberg’s theory is inherently Hollywoodian and full of holes. Another Jones did more in-depth work on the subject: Archaeologist Wendell Jones argued that the ark was moved to the Dead Sea caves, and that he was the inspiration for the Indiana of movie fame. Obviously, no ark came to light in searches conducted in the Dead Sea area.

“According to the Book of Kings, the Ark of the Covenant was placed in the temple’s Holy of Holies by King Solomon, and from that moment on we have no evidence of its existence,” said Yigal Levin, a faculty member of the department of Jewish history at Bar Ilan University.

While the evidence might have petered out there, the theories were only beginning. As we know, Jerusalem was conquered frequently over the course of history. Nations came and left; kings robbed and religious leaders coveted. There were countless opportunities for the ark to travel to the ends of the world.

“Some claim that the ark was taken by the Queen of Sheba, who came to visit King Solomon,” explained Levin. “This is the basis for the theory that the ark is to be found in Ethiopia, and there are those who claim that it was taken by Egyptian King Shishak. This is the version familiar to us from the film 'Indiana Jones and the Raiders of the Lost Ark.'"

The Ethiopian theory takes a surprising turn in the words of librarian and researcher of popular culture Eli Eshed. In an article he published on the Hebrew-language Reading Reindeer site under the headline “Raiders of the Ark of the Covenant,” Eshed quotes from a book published by Kelly D. Alexander. Alexander claims that during the Operation Moses campaign in 1991 to bring Ethiopian Jews to Israel, a parallel but very clandestine operation was conducted to return the Ark of the Covenant to Israel. According to the story, discussions were held at the highest echelons between Israel and Ethiopian generals, and the latter received some millions of dollars in exchange for permission to take the ark to Israel. Several Jewish millionaires provided the money but the generals, who escaped to Switzerland, did not know that the money delivered was fake. The Israelis were careful to report the counterfeit money to the Swiss banks, and the generals were arrested when they tried to deposit the loot. Afterward, the Israelis turned to the rebel forces that took control of Ethiopia at the time and gave them the real money. This money enabled the new rulers to fund their activities, and in exchange they gave the ark to the Israelis.

“I am very doubtful about the veracity of this story,” concluded Eshed. “It sounds like those fabricated tales that are so massively widespread on the Internet.”

“The most reasonable theory is that the ark remained in the Holy of Holies until the destruction of the temple in 586 B.C.,” said Levin, “As far as we know, the ark was not taken to Babylonia by Nebuchadnezzar, who destroyed the temple, and it does not appear among the vessels returned by Cyrus, King of Persia, who authorized the rebuilding of the Second Temple.”

The argument concealed in the statement above is that it is likely that the Ark of the Covenant was destroyed together with the First Temple. But those who stand by the theory that the ark had been moved will say that it is hard to believe that the builders of the Second Temple did not find the ark if it was really buried there. They, contrary to Goren, did enjoy free access to the Temple Mount. Thus, according to their version, the ark was either destroyed or moved around the world.

But even those who agree that the ark was taken to a secret place do not agree on who took it, when it was taken and to where.

One Jewish allegation connects the temple vessels to Italy. According to this allegation, the Arch of Titus displays the carrying of the temple vessels to Rome, including the Golden Candelabra; some argue that the Talmud also brings evidence of this (Tractate Me’ilot 17b). According to this claim, Rabbi Shimon bar Yochai and his disciple Rabbi Elazar, son of Rabbi Yossi, sailed to Rome (Tractate Gittin 56) and went to Caesar’s palace. There, Elazar glimpsed the curtain (parochet) of the temple and the golden head plate of the high priest, and Shimon bar Yochai saw the Golden Candelabra. This Talmudic story is the basis for the claim that temple vessels are still hidden in the Vatican basements to this very day. If we let our imaginations run a bit further, perhaps the ark is there as well.

This story, too, is chronologically problematic, since many people claim that no Ark of the Covenant existed in the Second Temple. In any case, there are those who took this story very seriously, and in 2009 Jewish right-wing activists asked an Israeli court to issue a stay-of-exit order against Pope Benedict XVI when he visited Israel, with the demand that he return the holy vessels.

Many hold that it is only a matter of time until the whereabouts of the ark will be revealed. The Temple Mount faithful certainly believe that its discovery will be accompanied by the coming of the Messiah and the building of the Third Temple. Others think that its detection will connect Moses and the contemporary Jewish nation once and for all. They believe that it will forge a permanent, indissoluble bond between the State of Israel and the Temple Mount, in other words affirming the right to settle in the land of Israel. Thus, we see that the Ark of the Covenant is not only a religious symbol, but a political tool as well.

“All we have are legends,” summarized Levin. “So long as no new testimonies emerge regarding the whereabouts of the ark, we have, in effect, no way at all of knowing where it is.”