Ultra-Orthodox leaders generally agree that Jews should not ascend the Temple Mount, but a growing number of Orthodox-Zionist rabbis support Temple Mount activists in their campaign to ascend, for nationalist reasons. 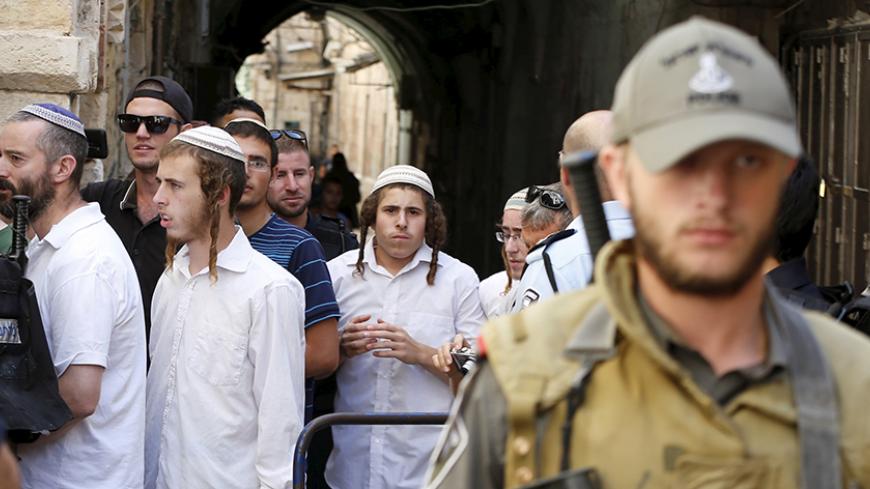 Israeli policemen stand guard as a group of Jewish youths leave after visiting the compound that houses Al-Aqsa Mosque, known by Muslims as the Noble Sanctuary and by Jews as the Temple Mount, in Jerusalem's Old City, Sept. 22, 2015. - REUTERS/Ammar Awad

According to a Mishnah (section) in Masechet Kelim (Tractate of Vessels), ascension to the Temple Mount is permitted only after immersing in a mikvah (ritual bath). But within certain sections of the Temple Mount compound, additional levels of holiness are needed in order for one to enter them, for which ritual immersion is not sufficient. For instance, these include the Hacheil area (part of the temple surrounding some of its courts) and the Holy of Holies. Access to the latter was restricted to the high priest on Yom Kippur. Although the Temple no longer stands, most of the Jewish law adjudicators from the 12th to 14th centuries — mainly the Tosafists and Maimonides (Rambam) — ruled that the sanctity of the site still prevails and the prohibitions apply to this day. After the 1967 Six-Day War, when the Temple Mount question became relevant, most of Israel’s rabbis ruled that Jews should not ascend to the Temple Mount even after ritual immersion. This was because they felt that the locations of the Holy of Holies and Hacheil sections were not definitive enough. Thus, there was real concern over committing a severe religious transgression by stepping anywhere on the Temple Mount.

In recent years, some rabbis of the religious Zionist sector began to appeal this ruling. They argue that they have accurately identified the exact site of the Temple by relying on measurements taken on the spot by Chief Military Rabbi Shlomo Goren after the Six-Day War. (Goren accompanied the Israel Defense Forces troops who first arrived in Jerusalem's Old City in 1967.) Another argument given is that it is important to encourage Jews to visit the site, as part of the commandment of conquering the Land of Israel. They claim that the more Jews who are frequenting the holy site, the more the State of Israel will strengthen its sovereign jurisdiction and supervision over the place. This is, for instance, the claim of Rabbi Eliezer Melamed, head of the rabbinical college of Har Bracha. He is one of the prominent religious Zionist rabbis who support the ascension to the Temple Mount, for this reason.

Opponents of ascension to the Temple Mount reject this argument. They claim that even if we can precisely pinpoint the site of the Holy of Holies, Maimonides prohibited a “needless” ascent to the Temple Mount in any case. Another advocate of this latter view is Jerusalem’s current Ashkenazi Chief Rabbi Aryeh Stern, who actually belongs to the National Religious stream. Stern opposes pilgrimages to the Temple Mount. In an interview he gave in November 2014 to the Kikar Hashabat ultra-Orthodox news site, Stern adhered to his view forbidding ascension to the Temple Mount. He holds that ascension today to the holy site may well transgress religious law, because we are not sufficiently familiar with the exact borderlines of the most sanctified sections.

Now, however, with the Temple Mount right in the eye of a brewing storm, the ultra-Orthodox are also starting to raise security and diplomatic considerations in the struggle to prevent other Jews from visiting the site. So, for instance, the chairman of the Knesset’s Finance Committee, ultra-Orthodox Knesset member Moshe Gafni, launched a sharp attack against extreme-right Orthodox-Zionist Housing Minister Uri Ariel on Sept. 17 for going up to the Temple Mount on the eve of the Rosh Hashanah (Jewish New Year) holiday. Gafni accused Ariel of acting in an irresponsible manner, which could lead to an escalation of violence in the region. “I protest his [Ariel's] going up to the Temple Mount. … From my perspective, it makes no sense diplomatically,” Gafni said. “I don’t see him actually working as agriculture minister. He should take care of the Land of Israel as minister of agriculture and not by going to visit the Temple Mount.”

Three months ago, the ultra-Orthodox Yated Ne’eman newspaper published a scathing editorial that combined halachic arguments with diplomatic considerations as grounds for opposing such visits. The editorial called Jews who insist on visiting the site “wild weeds,” and said, “They make it a point to throw a match into an oil well that could bury the Middle East in smoking ashes.” Surprisingly, the newspaper’s editorial — which represents the position of Rabbi Aharon Leib Shteinman, the ultra-Orthodox community’s most prominent religious authority — reflects claims of the Israeli left, which argues that going up to the site is an act of political provocation. According to the paper, Jews who visit the site have no intention of praying there. Instead, “They present their political program as a religious aspiration, and use their teachings like a spade to dig up new political achievements.” The paper goes on to quote the various religious prohibitions against visiting the site, and concludes that anyone who can must do everything in their power to close the site to Jews.

In a conversation with Al-Monitor, journalist and prominent Temple Mount activist Arnon Segal of the Association of Temple Mount Organizations rejected the claims that visiting the site contentiously constituted a breach of the Jewish law. He showed deep familiarity with the relevant issues from the moment the discussion began, using quotes from numerous sources, ranging from the Talmud to Maimonides to contemporary religious authorities. So, for instance, he cited letters by Maimonides (1138-1204), apparently describing his visit to the Temple Mount. Segal went on to dismiss the halachic arguments by leading ultra-Orthodox rabbis, who prohibit Jews from visiting the site, saying, “I reject the very notion of '[religious] leaders of the generation.' Anyone can rule in matters of Jewish law.” More particularly, he believes that the halachic prohibitions are trifles, and that “the ultra-Orthodox are obsessed with them.” He thinks that the arguments in favor of ascending are stronger.

Segal sees in the debate over visiting the Temple Mount a much wider ideological conflict between the ultra-Orthodox and religious nationalist communities. “The ultra-Orthodox adopt an old-style approach, typical of the Diaspora, and limit themselves to halachic prohibitions. They would rather do nothing, while the religious nationalist community sees the bigger picture and emphasizes the practical realization of our lives as Jews in the land of the Bible. The halachic prohibition against visiting the Temple Mount is marginal, when compared with the larger objective of ‘renewing our days as they once were’ [reference to the book of Eicha (Lamentations) 5:21], of taking charge of our destiny and of striving to build the Third Temple.” According to Segal, “There is a very obvious alliance between ultra-Orthodox and secular groups, which strive to maintain religion as some kind of utopian ideal. This collaboration in itself is hypocritical, because both sides are betraying their core principles. The ultra-Orthodox are betraying their Judaism, and the secular are betraying their secularism, including the basic democratic commitment to freedom of worship.”

Rabbi Shmuel Rabinovich, chief rabbi of the Western Wall and the Holy Sites, takes an unequivocal position opposing visits to the Temple Mount. “Right after Israel conquered the Temple Mount in 1967, there was a wall-to-wall halachic consensus on a prohibition against going up to the site,” he told Al-Monitor. “The most important religious nationalist rabbis of the day signed on to this prohibition, including Rabbi Zvi Yehuda Kook, Rabbi Avraham Shapiro and others. While it has since been violated — especially over the past few years — the Chief Rabbinate’s position has not changed. It appears on a sign that we posted at the entrance to the site, which states emphatically that there is a very firm halachic prohibition against going up to the Temple Mount.” Nonetheless, Rabinovich has an insistent position about the "ownership" of the Temple Mount. “The Temple Mount belongs to the Jews, and archaeology and history prove that,” he said.

In contrast, Segal has nothing but ridicule for that sign banning Jews from the Temple Mount. “It is a disgrace to the rabbinate, which I consider to be a political organization, rather than a religious one,” he said. “Terrorist organizations headed by Hamas base their claims on that ridiculous sign and use it to legitimize their opposition to Jews visiting the Temple Mount. I find it funny that the ultra-Orthodox, who have always opposed the institution of the rabbinate, are now embracing it. Countering the halachic prohibition to go up to the site are numerous halachic obligations, which can only be performed there, and which override the prohibition.”

For decades now, the ultra-Orthodox have sided with Israel’s right-wing governments, leaving the impression that they are gradually inching closer to a more nationalist ideological approach. What the bitter argument over the Temple Mount reveals is that when dealing with existential issues surrounding the Jewish presence in the Land of Israel, there are still deep ideological differences between the ultra-Orthodox and religious nationalist communities.